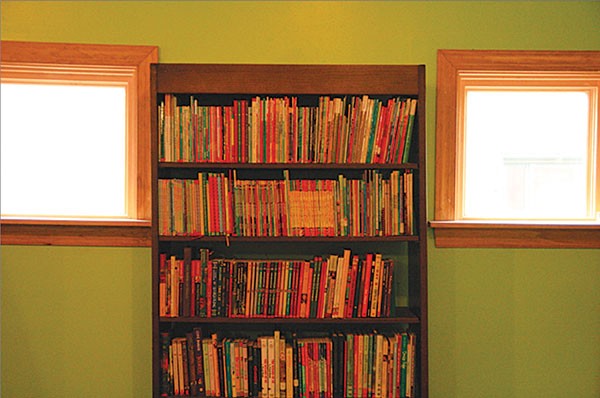 Some doomsayers have been predicting the demise of libraries. But this week, a library opens for the first time in Millvale. "We didn't set out to build a library," says Tricia George, secretary of the board of trustees for the Millvale Community Library. The new institution is the result of a project to create a community space for learning — one that took six years and more than 1,000 volunteers contributing 50,000 hours of service. The day-long grand-opening celebration, on Sun., Aug. 18, begins with a ceremonial good-luck Chinese lion dance, performed by the Gong Lung (Steel Dragon) martial-arts school. Attendees are encouraged to bring scissors to participate in the collective ribbon-cutting ceremony. There's also a yoga class at 10 a.m., and kids can enjoy story time throughout the day. Small Press Pittsburgh offers its pop-up stand full of fiction, poetry, creative nonfiction and zines, among other selections. Several artists will provide the sounds, ranging from R&B group Smokin' Section to the classic and underground soul and funk of Title Town's DJ Gordy. The full schedule is on the Millvale Community Library website. While the library building — with its deck, backyard and community garden — has been the site of children's programming for the past two summers, it fully opens for business Aug. 20. Olivia Lammel 1-8 p.m. Sun., Aug. 18. 213 Grant Ave., Millvale. Free. 412-822-7081 or www.millvalelibrary.org

Just in case you're seeing The Andy Warhol Bridge for the first time in a while and wondering what's up: This past weekend, some 1,847 knitting and crocheting artists yarn-bombed it. The unmissable stunt known as Knit the Bridge is a grassroots public art project of the Fiberarts Guild of Pittsburgh. The yarn-bomb won't be defused at least until Sept. 6. A community celebration is planned for Aug. 25. Bill O'Driscoll Seventh Street Bridge, Downtown. www.knitthebridge.org

Yes, Pittsburgh has its Fashion Week and now a Style Week, too. And it's still got the annual Rae Gold Fashion Show. The locally based artist is known nationally for her wool and silk garments, hand-dyed using techniques including shibori and itajime. Gold's jackets, vests, tunics and scarves are modeled by friends and supporters of the Society for Contemporary Craft, which hosts the show. The event also caps SCC's Summer of Fiber, including the Fiberart International 2013 exhibit, which closes Aug. 18. BO 5:30-7:30 p.m. 2100 Smallman St., Strip District. Free. Reservations requested at 412-261-7003 or www.contemporarycraft.org.

Artist Terry Boyd travels to Spice World in his new collection of paintings, The Spice Girls: Live at the Inn. The paintings offer sincere and nostalgic snapshots of the '90s British pop sensations through the lens of Boyd's memory. Scary, Baby, Posh, Sporty and Ginger are dreamily depicted with oil paint on linen. The paintings will be accompanied by Boyd's personal collection of Spice Girls memorabilia (think Tiger Beat and Spice Girls beach towels) that both prove his fandom and served as his source material. The Inn opened as a full-time gallery in Lawrenceville in March. Olivia Lammel 6-9 p.m. 5601 Butler St., Lawrenceville. Free. 412-298-5703 or www.collegeinnprojects.com

Long-running reading series TNY Presents returns from its summer hiatus. Readers include Patrick Malloy, author of Bang Bang, a darkly comic science-fiction novel about funeral-home workers, um, ginning up business in a future where nobody dies. Joshua M. Patton is a Pitt student and U.S. Army veteran who contributes to Dadditudes and AND Magazine, and writes fiction and poetry. And writer Mark Sepe notes that he "has no life." So there you go. At ModernFormations tonight, $5 gets you in the door, unless you bring a potluck contribution, in which case it's free. BO 8 p.m. 4919 Penn Ave., Garfield. 412-362-0274

For the fourth year in a row, word nerds and puzzle junkies will try to solve their way to victory at Soldiers & Sailors Memorial Hall. The Pittsburgh Crossword Puzzle Tournament is open to contestants of all ages and abilities. New York Times crossword editor Will Shortz provides the puzzles. Rachel Colangelo, a recent Pitt graduate, started this fundraising tournament to "solve the puzzle of blood-related cancers." Proceeds from entry fees benefit the Western PA/West Virginia Chapter of the Leukemia & Lymphoma Society. OL 1-4 p.m. (registration starts at 12:30 p.m.) 4141 Fifth Ave., Oakland. $25 ($40 per pair). 724-554-4838 or www.sites.google.com/site/pittsburghcrossword

Pittsburgh Ballet Theatre's annual Hartwood Acres show includes more than just some free open-air ballet. The concert is preceded by a couple of hours of games, crafts and other free family activities, including dance activities with PBT instructors. Also at 5 p.m., there's a ticketed barbecue dinner with PBT company dancers, including live music and cocktails. (Buying pre-show drinks for dancers is probably frowned on, though.) Then comes Ballet Under the Stars, with works by famed choreographers Mark Morris (Drink to Me Only With Thine Eyes) and Dwight Rhoden (Step Touch), the latter scored with doo-wop hits like "Under the Boardwalk." BO 5 p.m. family activities (7:30 p.m. concert). Dinner: $20-75. 412-454-9137 or www.pittsburghballet.org

"Nerdfighters" don't fight nerds. Rather, they're fans of John Green, the young-adult novelist who with his sibling, Hank, composes the Vlogbrothers. Their enthusiasm for collaborative online video projects sparked the movement for nerd-positive types (quick, flash the Vulcan hand sign!) who do charity initiatives and more to "increase awesome and decrease suck." (The Greens' YouTube channel has more than 1 million subscribers.) As her senior collegiate honors thesis, nerdfighter Hannah Lindgren made the documentary "A Film to Decrease Worldsuck," now on tour. The 40-minute film — which, naturally, incorporates crowd-sourced video — screens today at the Carnegie Museum of Art. The evening includes live music and a trivia contest. Your price of admission is a nonperishable food for the Greater Pittsburgh Community Food Bank, collected by the Pittsburgh Area Nerdfighters. BO 5-8 p.m. 4400 Forbes Ave., Oakland. 412-622-1906