Fundraiser for the Carrie Deer sculpture; Fermentation on Wheels hits town; the Biennial keeps rolling out; and Phenomenon the Poet returns.

For a year, starting in 1997, the guerrilla artists of the Industrial Arts Co-op spent every Sunday at the Carrie Furnaces, in Rankin. The overgrown, long-vacated U.S. Steel Homestead Works site was perfect for a 40-foot-tall sculpture of a deer head, crafted from materials found there, to honor both Pittsburgh's industrial past and nature's restorative power. Amazingly, the Carrie Deer has survived vandals, the elements and the possibility of demolition by the property's previous corporate owner and its subsequent landlord, Allegheny County. Now the sculpture is "the sentinel for this site," says Ron Baraff, who heads the Rivers of Steel National Heritage Area, which since 2005 has hosted tours and other activities at this National Historic Landmark. But the sentinel needs help: Its support structure is crumbling. To launch a $5,000 Kickstarter campaign (part of a $20,000 conservation plan), Rivers of Steel presents Aug. 16's Save the Carrie Deer Fundraiser. Food vendors, live music and celebrity hosts David Conrad and Rick Sebak complement the premiere of The Carrie Deer, local filmmaker Sharon Brown's hour-long documentary. "I couldn't have imagined 15 years ago ... that we would be inviting people to the site to talk about restoring the piece," says Tim Kaulen, one of the Carrie Deer artists. "It's the remarkable acceptance of a piece that was really on the fringe." Bill O'Driscoll 8 p.m. (6 p.m. VIP reception) Sat., Aug. 16. Rankin. $10 (VIP: $125).  www.riversofsteel.com

A new theater group, The Lab Project, offers an inaugural full-length show that broaches "a lot of taboo subjects," according to founder Monteze Freeland. The Gospel Singer is local playwright C.S. Wyatt's drama-with-music about a black drag queen, booted from his Baptist choir, who wants to work gospel into his popular nightclub act. The premiere production has a cast of six headed by Mils MJ James, and features both gospel standards and original numbers. Freeland directs; the first performance at Pittsburgh Playwrights' space is tonight. BO 8 p.m. Continues through Aug. 31. 937 Liberty Ave., Downtown. $10-15. www.labprojectpgh.org 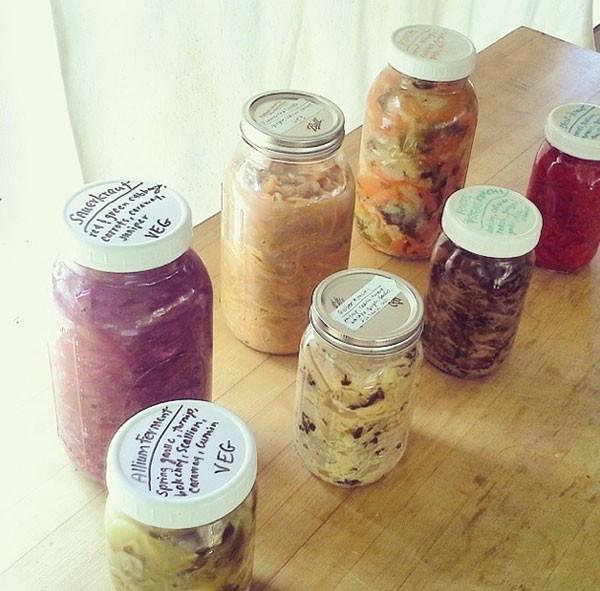 Oh, the wheels on the bus ... popularize a metabolic process that turns starches and sugars into alcohols, gasses or acids. If it's the Fermentation on Wheels bus, that is. Oregon-based Tara Whitsitt's converted International Harvester roams the land, providing free education about food sustainability, especially the biological process that gives us stuff like beer, pickles and sauerkraut. Whitsitt is in Pittsburgh through Aug. 23 for events including today's community potluck and talk at Chatham University. Events at the Children's Museum include Pickle Day (Aug. 16) and an Aug. 20 fermentation workshop. On Aug. 23, Wigle Whiskey hosts a workshop titled Fermentation By Season. All events are donation-based. BO Community potluck: 4-7 p.m. (Chatham campus, Shadyside). Complete schedule at www.fermentationonwheels.com

Back by popular demand, Chicago-based spoken word artist Phenomenon the Poet returns to the Hill House Kaufmann Center tonight after selling out the venue last year. The magazine columnist, English teacher and poetry-slam champion is currently touring behind her latest novel, A Lesbian in God's House, and visits as part of the Eargasm Open Mic Series. DJ Assassin will provide musical accompaniment and Deliciously Devine will sell cupcakes and other baked goods. Dan Willis 8 p.m. 1825 Centre Ave., Hill District. $15. 412-392-4400 or www.hillhouse.org

Film festival and salon series afronaut(a) is back. The free screenings, discussions and performances continue tonight as curators Alisha B. Wormsley and Blaine Siegel highlight one of their personal inspirations with a showing of Space Is the Place. Among other things, jazz visionary Sun Ra's far-out cult-favorite 1974 science-fiction film critiques the representations of black people in mass media. The screening, held, appropriately enough, at Tarentum's Wagman Observatory, is followed by a performance by local musician and sound-collage artist Ricardo Iamuuri. DW 7-10 p.m. 225 Kurn Road, Tarentum. Free. 412-363-3000 or www.kelly-strayhorn.org

Ballet strike you as a little stuffy? Tonight, at Hartwood Acres, Pittsburgh Ballet Theatre kicks off its 45th-anniversary season with an open-air sneak peek of season-opener The Sleeping Beauty. The event starts at 5 p.m., with various free family activities and photo ops, plus the BRGR food truck and Pop Stop popsicle stand. The free performance starts at 7:30 p.m. Attendees can also register online for a pre-show picnic dinner with company dancers ($75 for adults, $20 for children). DW 5 p.m. (7:30 performance). Hampton Township. Free. 412-281-0360 or www.pbt.org

Benny Lewis calls himself a "language hacker." Last year, National Geographic named the Irish-born Lewis its Traveler of the Year for his multilingual facility: He's at 11 tongues and counting, from Spanish to Mandarin. But Lewis says he's no savant: He just works at it, and employs common-sense methods he details in his new book Fluent in 3 Months (HarperOne). Lewis visits Penguin Bookshop tonight, and will probably break out his English for you, if he must. BO 6 p.m. 417 Beaver St., Sewickley. Free. 412-741-3838

In concurrence with the annual National Sexual Assault Conference being held in Pittsburgh, The Monument Quilt Project sets up today in Point State Park. The project seeks to create a public healing space for rape survivors by sharing the stories of the group's touring members, and encouraging visitors to do the same. On display are sections of a quilt that will eventually cover one mile of the National Mall in Washington, D.C., to spell "NOT ALONE" — the first national monument for rape survivors. DW 4 p.m. 101 Commonwealth Place, Downtown. Free. 443-722-0929 or www.themonumentquilt.com

Competitive, team-based karaoke leagues are becoming very popular among our nation's more uninhibited residents. Registration is open for the inaugural season of Steel City Karaoke, Pittsburgh's first such league. Teams are comprised of exactly eight players, two of whom must be male. Teams have until the Sept. 3 season-opener to register, and league play will continue every Wednesday at the Bloomfield Bridge Tavern until the championship round, on Nov. 19. DW Registration is $45 per person. 844-937-4642 or www.steelcitykaraoke.com