Though the performers on the Wham City Comedy Tour aren't exactly household names, you might have seen one of them in your household. Alan Resnick's parody commercial that aired on Adult Swim featured him infotaining a studio audience: Hire him for free to create a talking 3-D avatar of your face, and you can live forever! Touting a subpar and quite creepy product, the commercial is cheesy and over-the-top; Resnick's satisfied customers include a sick, bedridden child who says, "People don't die. People's bodies die. He taught me that," before lapsing into a coughing fit. The short was originally developed for the Wham City Comedy Tour, which sprang from Baltimore art collective Wham City. The group's comedians have been making rounds on the East Coast since 2010; this year they'll also venture into the Midwest. Spin called Wham City "a collective of hilarious weirdos that dig on the absurd. It's performance art, oddball and experimental theater, film, comics, and, yes, Wham City is comedy." Resnick, Ben O'Brien, Robby Rackleff and Mickey Freeland will incorporate skits, monologues, standup and videos into this week's performance at the Melwood Screening Room. Appropriate for all ages, the show opens with Baltimore-based Stavros Halkias, local comic Molly Sharrow and Rem Lezar (of found-footage comedy website Everything Is Terrible). Angela Suico 8 p.m. Wed., April 16. 477 Melwood Ave., Oakland. $10. 412-681-5449 or www.whamcity.com

Call him a pilgrim for the environment. In 1971, when John Francis was 26, a massive California oil spill convinced him to make two big changes: It would be 17 years before he spoke again, and 22 before he rode in motorized transportation. During that time, the Philadelphia native walked the country, earned a master's degree and, most importantly, he says, he learned to listen. Francis, author of the books Planetwalker and The Ragged Edge of Silence, speaks tonight (loud and clear) at the Green Building Alliance's sustainability-themed Inspire Speakers Series, at Phipps Conservatory. Bill O'Driscoll 6 p.m. 1 Schenley Drive, Oakland. $15-45. 412-773-6005 or www.go-gba.org

Two poets round out this year's Pittsburgh Contemporary Writers Series. Dana Ward is the author of This Can't Be Life, a reflection on art and life based on "the relationship between mortality and politics." He appears tonight with Anne Boyer, whose collection The Romance of Happy Workers includes "Home on the Range": "Mix a drink of stock lot: vermouth and the water table. And the bar will smell of IBP. And you will lick my Laura Ingalls." Angela Suico 8:30 p.m. Frick Fine Arts Building, 650 Schenley Plaza, Oakland. Free. 412-624-6508 or www.pghwriterseries.wordpress.com

A fish, a mouse and an inchworm star in Swimmy, Frederick, and Inch by Inch. This puppet play features three Caldecott-winning children's books written by Leo Lionni. See Swimmy use his smarts to escape from danger, hear Frederick recite poetry, and follow an unnamed inchworm with a penchant "for measuring absolutely everything." Part of the Pittsburgh International Children's Theater's Family Series, the show is performed by Mermaid Theatre of Nova Scotia. Tonight's show at the Byham Theater is followed by two performances tomorrow. AS 7 p.m. Also 11 a.m. and 2 p.m. Sat., April 12. 101 Sixth St., Downtown. $9.50-11. 412-456-6666 or www.trustarts.org 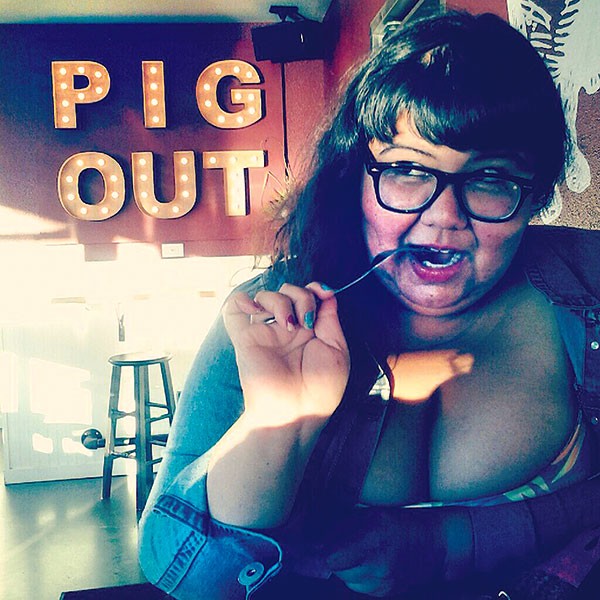 Sister Spit is a collective of authors, performance artists and filmmakers who focus on queer living. Performing and reading at The Andy Warhol Museum are: writer Ali Liebegott, whose novel The Beautifully Worthless won the 2005 Lambda Literary Award for Debut Lesbian Fiction; Virgie Tovar (pictured), a "fat activist" who has shared her body-image expertise on MTV, Al Jazeera and NPR; and Lanelle Moïse, whose new release, Haiti Glass, was deemed "a magnificent collection of poetry and prose" by author Edwidge Danticat. AS 8 p.m. 117 Sandusky St., North Side. $15 ($12 students/museum members). 412-237-8300 or www.warhol.org 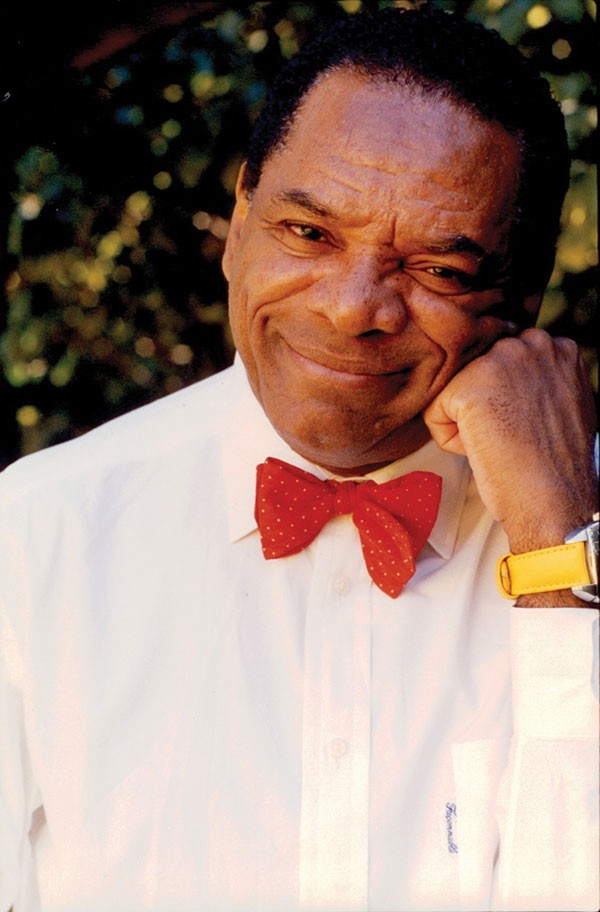 If your dad were a profane but lovable raconteur — and who says he isn't? — he might remind you of John Witherspoon. Witherspoon is less a joke-teller than a scene-stealer, which talent has gotten him dad roles in the Friday movies and on The Wayan Brothers series. He's also a veteran of standup comedy, and his latest tour takes him to the Pittsburgh Improv for five shows starting with two tonight. BO 8 and 10:15 p.m. Also 7 and 9:15 p.m. Sat., April 12, and 7 p.m. Sun., April 13. 166 E. Bridge St., West Homestead (The Waterfront). $25 (21 and over). 412-462-5233 or www.pittsburgh.improv.com 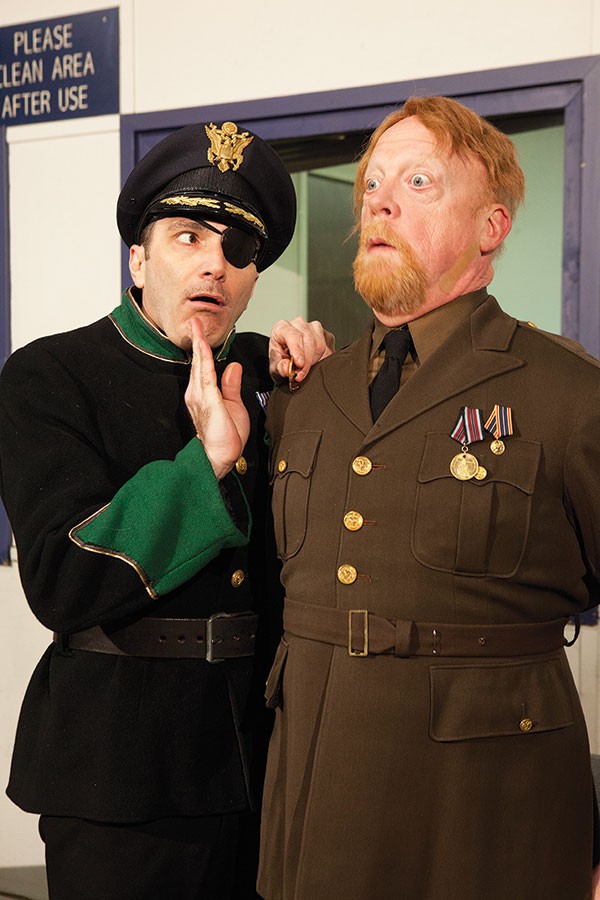 Pantagleize is a 1929 play by Michel de Ghelderode, a French playwright who some say prefigured avant-garde writers like Ionesco. De Ghelderode's madcap satire on revolution and militarism has been reimagined by Jay Ball, and the new version world-premieres starting tonight at Quantum Theatre. The adaptation — partly inspired by the 1965 episode that found Allen Ginsberg briefly crowned Prague's "King of May" — is set in an unnamed Eastern European country. The big cast includes such comedic luminaries as Randy Kovitz, Tony Bingham and Lisa Ann Goldsmith. Jed Allen Harris directs the show, staged in an office building in North Point Breeze. BO 8 p.m. Show continues through April 27. 400 N. Lexington Ave., North Point Breeze. $18-49. 412-362-1713 or www.quantumtheatre.com

A new exhibit opening today at the Carnegie Museum of Art, Architecture+Photography, spotlights storied buildings and the lenses that love them. Featured are the noted 20th-century photographer Ezra Stoller, whose work educated aesthetes on architectural Modernism, and Frances Benjamin Johnston, whose photos of Charleston, S.C., buildings highlight the link between photography and historic preservation. Also included are photos from a 1920s Carnegie "art set," which the Carnegie Corporation of New York donated to schools across the nation to promote free education for all and pictures from the museum's own photography department. AS 10 a.m.-5 p.m. Exhibit continues through May 26. 4400 Forbes Ave., Oakland. $11.95-$17.95. 412-622-3131 or www.cmoa.org

"He's a patriarch to us all," says bassist Dwayne Dolphin about drummer Roger Humphries in Roger Humphries: Pass It On. Independent filmmaker Billy Jackson's new hour-long documentary is a tribute to Humphries, a one-time sideman to Stanley Turrentine, Ray Charles, et al., whose greatest legacy might nonetheless be as a mentor and role model for countless area musicians. Jackson places Humphries both within his large extended family and within the Pittsburgh jazz community whose linchpin he arguably is. Tonight's screening, at the Kelly-Strayhorn Theater, benefits groups including The Afro-American Music Institute. BO 6 p.m. (5 p.m. VIP reception.) 5941 Penn Ave., East Liberty. $10-125. www.rhpassiton.com

Both the young and the young at heart can take a turn on the PNC Carousel, which reopens for the season today at noon in Schenley Plaza. Though operation is currently limited to afternoons, carousel hours will be extended to 10 p.m. from Mother's Day through Aug. 11. From June until October, free rides will be offered between noon and 6 p.m. on the second Sunday of each month. The carousel is just one way to enjoy Schenley Plaza, whose summer programming also includes lunchtime yoga and Sunday tai chi. AS Noon-6 p.m. 4100 Forbes Ave., Oakland. $1.25 per ride. 412-682-7275 or www.pittsburghparks.org