The Rake’s Progress at Pittsburgh Opera; Frankie Capri kicks it Downtown; Suzanne Westenhoefer at Cruze; Marlon Wayans at the Carnegie of Homestead

A series of 18th-century works by British painter William Hogarth, depicting a morality tale about a dissolute heir, inspired musical titan Igor Stravinsky to compose The Rake’s Progress. The opera, with its libretto by Chester Kallman and famed poet W.H. Auden, debuted in 1951; a 1975 British revival featured a striking new set by influential British artist David Hockney. Two years ago, those iconic production materials were inherited by Pittsburgh Opera. With the black crosshatching on its backdrops and costumes, and a cartoony palette of red, blue and green, the production “looks like it could be a dollhouse,” says Opera director Christopher Hahn. On April 30, the Opera premieres its first-ever staging of Rake’s Progress. The show stars tenor Alek Shrader, soprano Layla Claire (both pictured) and bass-baritone David Pittsinger as, respectively, Tom Rakewell, the heir; Anne Trulove, his betrothed; and Nick Shadow, the Mephistophelian emissary who tempts Rakewell to his undoing. Despite its premise, says Hahn, the show is satirical rather than pious: “It’s tongue-in-cheek, it’s playful.” The music, meanwhile, belies Stravinsky’s status as a revolutionary of dissonance. With its callbacks to Mozart, Monteverdi and Rossini, says Hahn, “It’s full of the most beautiful arias and duets, little trios.” Bill O’Driscoll 8 p.m. Sat., April 30. Also 7 p.m. Tue., May 3, and May 6 and 8. Benedum Center, 237 Seventh St., Downtown. $12-157. 412-456-6666 or www.pittsburghopera.org

If he were mayor, he’d put bumpers along the HOV lanes after 11 p.m. as designated drunk-driver lanes. So begins the joke that Matt Light says that The Onion recently stole from him. Always one to make light of a situation, the 26-year-old comedian chalks the theft up to his success, including his two-time title as Pittsburgh Magazine’s Best Comedian in Pittsburgh. It all began in 2013, when WDVE’s man-in-the-street interviewer was diagnosed with Hodgkin’s Lymphoma. “I didn’t know how much time I had left,” Light tells City Paper. “So I wanted to make this a career, not a hobby.” Catch this no-nonsense but charming comedian at what he calls his final show at Pittsburgh Improv, Matt Light: The Curtain Call. Courtney Linder 8 p.m. 166 E. Bridge St., The Waterfront, Homestead. $20. 412-462-5233 or www.pittsburghimprov.com 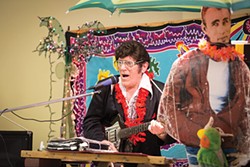 Pittsburghers of a certain age recall that for 15 years, the South Side’s Liberty Belle Tavern and its successor, the Lava Lounge, hosted the unique talents of Frankie Capri. The one-man band in black muttonchops belted out Elvis, Sinatra and Johnny Cash tunes accompanied by an array of mechanical monkeys, while revelers donned the rubber masks he provided and danced wildly. That gig ended in 1999. But even though the Lava Lounge itself is now going away, Frankie remains, as evidenced by his successful March gig at the Pittsburgh Downtown Partnership’s Night Market. Tonight, this local icon begins Frankie Fridays, a run of four Fridays at the equally iconic Original Oyster House, also courtesy of the PDP. Capri tells CP he anticipates seeing faces both old and new. “I’ll be happy to see all them people,” he says. “And we’ll have a happy crowd.” BO 5-10 p.m. Also May 6, 13 and 20. 20 Market Square, Downtown. Free. www.downtownpittsburgh.com

“People still hate gay people,” noted Suzanne Westenhoefer a few years back. “Isn’t it boring? It’s so last millennium.” The nationally touring comic will surely have a few thoughts about current events at Cruze Bar tonight. But this Lancaster County native — considered the first openly gay comic to perform for straight audiences, starting more than 25 years ago — mostly deals in everyday matters like relationships, or waking up achey after age 50: “You went to sleep and you got so fuckin’ old you don’t know how to sleep without hurting yourself.” BO 8:15 p.m. 1600 Smallman St., Strip District. $25-40 (18 and up). www.brownpapertickets.com

Tonight at Heinz Hall, aerialists, acrobats, contortionists, dancers, jugglers and strongmen perform to live music by the likes of Shostakovich, Williams, Bizet and Tchaikovsky. Cirque de la Symphonie is a world-touring production designed to bring the magic of cirque to music halls. The show blends the talents of former Olympians and world-record-holding athletes with those of the Pittsburgh Symphony Orchestra for four shows this weekend under the direction of nationally known pops conductor Jack Everly. CL 8 p.m. Continues through Sun., May 1. 600 Penn Ave., Downtown. $24-99. 412-392-4900 or www.pittsburghsymphony.org

Beautiful blooms in summery shades of crimson, like the brilliant red hibiscus, await at Phipps Conservatory and Botanical Garden’s Summer Flower Show: Playgardens. Beside the floral displays and elegant garden décor, the exhibit features interactive Rube Goldberg-inspired machines — complicated gadgets that perform simple tasks in convoluted ways — that complement the winding Serpentine Room. And in the East Room, you’ll find the electronic instrument called the theremin and an opportunity to conduct your own opera while overlooking an Italian arbor. CL 9:30 a.m. Show runs through Oct. 2. One Schenley Drive, Oakland. $11-15. 412-622-6914 or www.phipps.conservatory.org

While Pittsburghers (and anybody else in the know) has admired the work of August Wilson for decades, it’s now officially August Wilson Week. The week’s already brought the announcement of plans to restore his childhood home, in the Hill District, as an arts center. And today there’s a block party celebrating what would have been the great playwright’s 71st birthday, and it’s right in front of that very same house. The party features performances, a DJ, food trucks, kids’ activities and more. BO Noon-3 p.m. 1727 Bedford Ave., Hill District. Free; RSVP required at Facebook: Daisy Wilson Artist Community.

If you were going to see just one spoken-word event this year, this maybe should be it. All year, local slam poets have been competing at the weekly Steel City Slam; tonight, the top 13 face off to complete the team that will represent Pittsburgh at the National Poetry Slam in August, in Atlanta. The Steel City Grand Slam is at the Union Project. The event is BYOB. BO 7-10 p.m. 801 N. Negley Ave., Highland Park. $8-15. www.pghpoetry.org

In March 2014, Pakistani journalist and policy analyst Raza Rumi survived an attempt on his life. Now he explores the concept of “home” in a complex way in his book Delhi by Heart: Impressions of a Pakistani Traveler. “How is it that a man from Pakistan can cross the border into ‘hostile’ territory and yet not feel ‘foreign’?" he asks. Rumi, a writer in residence at Ithaca, N.Y.’s City of Asylum, will read from Delhi by Heart at City of Asylum/Pittsburgh tonight. CL 7 p.m. 330 Sampsonia Way, North Side. Free with reservation. 412-323-0278 or www.cityofasylum.org

Marlon Wayans can do drama, as he proved in Darren Aronofsky’s Requiem for a Dream, but he’s a comedian first. The writer, producer and director has starred in films like White Chicks and Norbit, but still does standup, selling out venues nationwide. Earlier this year, Wayans starred in and co-produced the Fifty Shades of Grey spoof Fifty Shades of Black. Tonight, Wayans’ Scandal-Less Tour hits the Carnegie of Homestead Music Hall for an all-ages show. CL 7:30 p.m. 510 E. 10th Ave., Munhall. $42.50-150. 412-462-3444 or www.librarymusichall.com