You might well recognize the headliner at Burning Bridges Festival: The very funny Geoff Tate (pictured) has credits including The Late Show With Craig Ferguson. But most performers at Pittsburgh’s newest comedy fest will probably be new to you. That’s by design. Organizer John Dick Winters’ Race to the Coffin Comedy and multimedia entertainment outfit The Epicast Network present this weekend of 14 shows spotlighting underground comics from Pittsburgh and as distant as Denver, mostly in nontraditional venues. “I think people need to realize that Pittsburgh’s comedy scene is really coming into its own,” says Winters, whose gravelly voice often resounds from local comedy stages. Winters booked 50-some performers, including both local names like Alex Stypula, Day Bracey and Molly Sharrow and 22 out-of-towners. The venues — including Allentown’s Black Forge Coffee House and Downtown’s Arcade Comedy Theater — are all-ages except for Club Café. Tate appears twice, including an April 15 show that’s followed by a midnight Nearly Nude Comedy (think underwear) show at Club Café. Other attractions include a Comic Wars competition and a worst-tattoo competition involving eight comics. (The “winner” gets a mystery tat onstage.) And a free Saturday-afternoon show at Black Forge is meant for cops at nearby Pittsburgh Police Zone 3 headquarters (but is open to all). Bill O’Driscoll Fri., April 15-Sun., April 17. Multiple venues. Most shows $5-10; festival pass: $20-30. www.burningbridgesfestival.com

The third annual Pittsburgh Fringe festival broadly resembles the second: Its 19 cutting-edge local-premiere shows over three days are all still on the North Side, for instance. But plenty besides the shows themselves is new. New executive director Xela Betchelder, who teaches at Waynesburg University, has worked at that fringe-fest grandaddy, Scotland’s Edinburgh Festival Fringe. Batchelder says 2016’s Pittsburgh Fringe has more shows from out of town playing a smaller, more navigable array of nontraditional performance venues (including St. Mary’s Lyceum and James Street Gastropub and Speakeasy). The lineup looks promising. For instance, Tulsa, Okla.-based Anna Bennett’s postmodern spoof Confessions of a Manic Pixie Dream Girl (pictured) imagines a support group for exemplars of this pop-culture trope. Pittsburgh-based Beautiful Cadaver Project’s Northeastsouthwest was developed by applying the surrealists’ “exquisite corpse” technique to playwriting. Local troupe Moquette Volante Theatrical Middle Eastern Dance Company offers Four Voices … One Story, with four women storytellers from different cultural backgrounds blending their takes on the Cinderella story into one spoken-word work. In It’s Who You Know, Los Angeles-based actor Chambers Stevens pulls random cards from his boxful of celebrity names and tells a true story about his run-in with that person. Perhaps most enticing of all is Virginia-based Michael Burgos’ The Eulogy. The one-man show, widely acclaimed on the fringe circuit from North American to Australia, is an outrageous, multi-character comedy about a memorial service gone awry. “It puts the fun in ‘funeral,’” says Batchelder. Bill O’Driscoll Fri., April 15-Sun., April 17. Various venues, North Side. Most shows $15; day or weekend passes: $25-95. www.pittsburghfringe.org

Not keeping quiet is what Vanessa German is all about. The performer and visual artist’s new show, dontsaythatshitoutloud, explores “community violence, healing, and the idea that we must speak directly to the things that we are often told should be kept silent.” Tonight’s the opening reception at Artists Image Resource; at 7 p.m., German herself will give a spoken-word performance in the form of a walk-through of this collection of installations featuring her sculptures and collage works incorporating photography, printmaking and more. BO 6-8 p.m. (free). Exhibit continues through May 29. 518 Foreland St., North Side. www.artistimageresource.org

They complete each other’s sentences and can improv a show completely based on porcupines, if you ask them. Greg Gillotti and Brian Gray — the artists behind local duo Iguanatron — are prominent in Pittsburgh’s comedy renaissance and have been performing together since 2009, adopting bizarre and outlandish characters along the way. The first stop on their East Coast tour is tonight, at the University of Pittsburgh’s Studio Theater. On Saturday afternoon, there’s an accompanying improv workshop. Courtney Linder 8 p.m. 4200 Fifth Ave., Oakland. $5 (free for Pitt students). 412-543-8422 or www.BrianMGray.com/2016-tour

Don’t mistake magicians for musicians and ask David London what instrument he plays; he might start whistling, as the acclaimed surrealist magician sometimes does to open his cabaret show, Magic Outside the Box. London, who has practiced magic for 20 years, visits Pittsburgh Playwrights Theatre. His Weekend of Magic includes: performances of Magic Outside the Box tonight and tomorrow; Saturday morning’s $2 viewing of The Adventure to the Imagi Nation, a family show; and Saturday afternoon’s Magic and Surrealism workshop. CL 8 p.m. Continues through Sat., April 16. 937 Liberty Ave., Downtown. $25-80. 301-787-4250 or www.pittsburghwom2016.bpt.me/

Bodies at rest become bodies in motion in Laws of Attraction. Attack Theatre’s new show delves into “physics and the forces that bind us.” The inveterately collaborative troupe’s latest grew from a residency at Winchester Thurston School, where company dancers used movement to investigate engineering and physics. But Laws of Attraction is all done with human bodies — no props allowed. Tonight, Attack begins three weekends’ of shows at a spacious former Uptown auto-body shop. BO 8 p.m. Continues through April 30. 300 Gist St., Uptown. $15-30. www.attacktheatre.com

When an orchestra plays songs by George Frideric Handel — but also includes modern music from Brian Eno and even Kenny Loggins’ “Footloose” — it demands attention. The Eclectic Laboratory Chamber Orchestra (ELCO) formed in 2008 to explore connections between diverse musical genres by promoting a broad repertoire. CrossPlay 2: Eclectic Boogaloo, ELCO’s performance tonight at Neu Kirche Contemporary Art Center, was inspired by dancers, dance music and the places the group performs. ELCO explores how dance is just as much about audio space as it is about movement. CL 8 p.m. 1000 Madison Ave., North Side. $10-20. 412-322-2224 or www.elcopgh.org

Gear up for a show of women on wheels as Steel City Roller Derby opens its 10th season. SCRD’s A-level team, Steel Hurtin’, faces Nashville’s Music City All-Stars in the headline bout, while junior-league squad The Steel Beamers confronts the Central Ohio Roller Dolls to start the evening. Be sure to get to Glenshaw Romp ’n Roll early — there are door prizes for the first 50 entrants. CL 7 p.m. 1661 E. Sutter Road, Glenshaw. $10-15. scrdskaterrelations@gmail.com or www.SteelCityRollerDerby.org 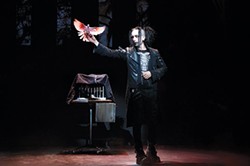 A manipulator, an “anti-conjuror,” a trickster, an escape artist, an inventor, a weapons master and a deceptionist walk into Heinz Hall — and you get a medley of illusion that has become the world’s best-selling touring magic show. The Illusionists: Live from Broadway features death-defying stunts — like Andrew Basso’s completion of Houdini’s famous Water Torture Cell without any covers. (He’s the only one who’s done it.) This Broadway Across in America — Pittsburgh show gets eight performances starting with tonight’s, and none of them feature rabbits. CL 7:30 p.m. Continues through April 24. 600 Penn Ave., Downtown. $26-72. 412-392-4900 or www.TrustArts.org