Short Honeymoon: With the ban on same-sex marriage removed, nondiscrimination is the next battle for "full equality" | News | Pittsburgh | Pittsburgh City Paper

Short Honeymoon: With the ban on same-sex marriage removed, nondiscrimination is the next battle for "full equality"

"If you go across the border, you can be fired for putting a marriage photo on your desk." 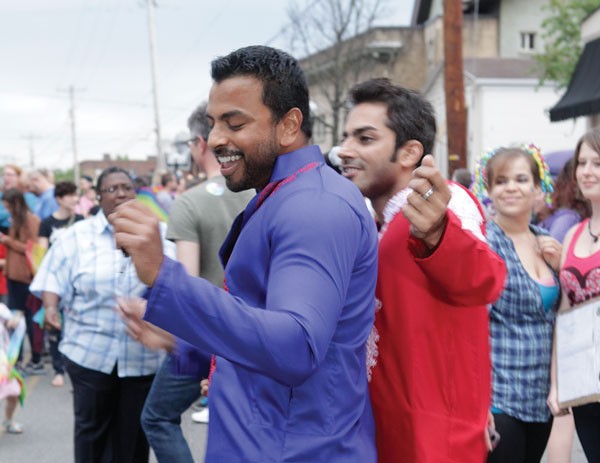 Photo by Heather Mull
Revelers took to the streets of Shadyside May 20 for a rally to celebrate a federal judge's decision striking down Pennsylvania's Defense of Marriage act.

As soon as Dek Ingraham heard that a federal judge overturned Pennsylvania's ban on same-sex marriage, he sped to the City-County Building to apply for a marriage license.

He was tired of waiting.

He'd been in a 10-year relationship with his partner — a relationship the state has refused to acknowledge. But as it turned out, they'd have to wait a little longer: The county's Marriage License Bureau was closed for Election Day.

"We rushed down here before we could do the research," says Ingraham's partner, J.R. Shaw.

They were among the first couples — most in long-term committed relationships — to apply in person for marriage licenses on May 21, the day after federal Judge John E. Jones III struck down Pennsylvania's ban on same-sex marriage. And on May 22, Gov. Tom Corbett announced he would not seek an appeal of the decision, quelling fears that their marriages could wind up in legal limbo.

"I've wanted this for a long time," Matt Thom said, just after applying for a marriage license. "It's just been hurtful being treated as a second-class citizen."

As more couples filtered through and shared their stories with reporters, a common theme emerged: None cared particularly about being legal pioneers; being first was about shedding the constant reminders that their relationships were somehow different.

"I think what's happened in the past few days is historic, it's glorious, remarkable," says Ted Martin, executive director of Equality Pennsylvania, an LGBT-advocacy group. "Pennsylvania went from being one of the most backward states to a marriage-equality state in less than 48 hours."

But while Pennsylvania has joined 18 other states that afford same-sex couples the same legal rights as straight couples, Martin calls the victory "uneven."

That's because, of the states in which same-sex couples can wed, Pennsylvania is the only one where it's still legal to discriminate on the basis of sexual orientation.

"It's really quite a paradox," says state Rep. Dan Frankel (D-Squirrel Hill). "While the judge has affirmed the rights of same-sex couples to marry, we still live in a state where it's still legal to fire someone [because they're] in the LGBT community."

Local blogger and LGBT activist Sue Kerr says she's already gotten inquiries from couples who "are weighing the pros and cons and asking about non-discrimination."

Equality PA's Martin says he thinks about it this way: "If you go across the border to Beaver [or] Washington County, you can be fired for putting a marriage photo on your desk."

No one knows how common such scenarios are. "It's difficult to quantify, because it's not illegal at the state level, so we don't collect the data," says Shannon Powers, communications director for the Pennsylvania Human Relations Commission. "And folks have stopped calling us because they know we don't protect them on that basis."

For people like Brian Prowel, though, discrimination isn't a statistical abstraction. He's a gay man who was fired from Wise Business Forms, Inc. in 2004 after complaining about several incidents of harassment, including one in which co-workers left "a pink, light-up, feather tiara with a package of lubricant jelly" on his workspace, court records show. He also claimed that co-workers at the Butler County company, where he worked for 13 years, referred to him as "rosebud" and "princess." He said he once overheard a co-worker say, "I hate him. They should shoot all the fags."

Students and Pittsburghers rally to defend abortion rights in Oakland

Students and Pittsburghers rally to defend abortion rights in Oakland