Shoplifters explores the complexities of family and poverty 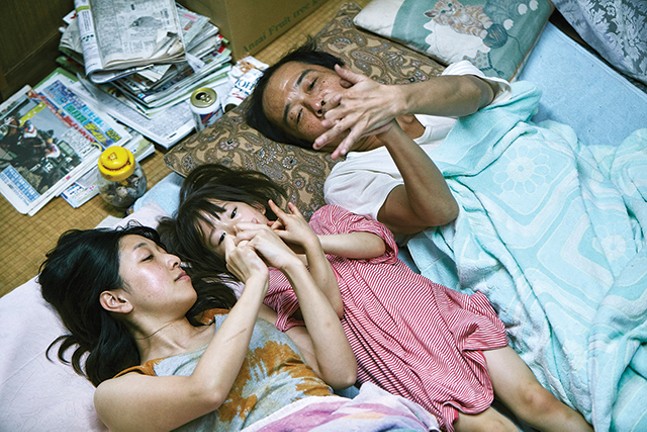 In Shoplifters, an untraditional family living in poverty sticks together, despite a lack of blood relation. Directed by Hirokazu Kore-eda, in Japanese with English subtitles, the movie takes a close look at how people build new families to depend on when their biological families fall short.

Osamu (Lily Franky) and his wife Naboyu (Sakura Ando) live in a minuscule, cramped apartment with their son Shota (Kairi Jyo), grandma Hatsue, (Kirin Kiki), and aunt Aki (Mayu Matsuoka). The parents work menial jobs, Aki is a sex worker, and grandma collects a pension. To survive, father and son shoplift most of their food and necessities. One cold night, while walking home, they find a young girl, Yuri (Miyu Sasaki), alone outside her house. They take her in, assuming the shelter is temporary, but when they try to return Yuri to her family, they see it's a violent, abusive household and decide to adopt her unofficially. Only when the family sees Yuri on the news as a missing person do they cut her hair and change her name.

As Yuri gets accustomed to the family's way of life, including no school and cramped sleeping, she also learns what it means to live in a house with people who want you there. Familial love is unconditional, but not always from the family you’re born into. After months of living in unconventional, downtrodden bliss, the truth about the family starts to unravel, and it becomes clear that the thread holding them together is not as strong as they thought.

Shoplifters has nearly everything you could want in a movie: empathy, mystery, warmth, humor, intimacy, sadness, noodles, the beach. It's a close portrait of poverty in a country that likes to pretend these living conditions don't exist (Japanese Prime Minister Shinzo Abe notably ignored the movie after it won the highest award at the Cannes Film Festival).

The movie shows beauty in the characters' lives without making poverty look idyllic, but it doesn't patronize them either. Shoplifters tackles the complex morals of a fraught class system that shows the blurriness between right and wrong. Would you steal food to feed your family? Would you steal food to feed your fake family? Would you teach a kidnapped child to steal to help take care of the fake family? They want the best for each other, but don't necessarily know what that means or how to give it.

The acting is superb, especially Ando as Nobuyo, the makeshift mom of the family. She comes from the same line of sex work as Aki and bears the same scars as Yuri, but she tries to provide the love and safety she never had. Ando plays her with poise and the maternal disarray of someone who's been playing house so long they've convinced themselves it’s a reality. But there's not a weak link in the cast, including the children, who have that accidental genius thing child actors have without realizing it.

In the end, no one in Shoplifters gets exactly what they want, but at least briefly, they had a family.