This is, as they say, not your dad's Sherlock Holmes. 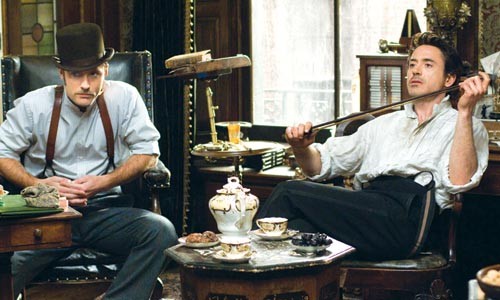 This is, as they say, not your dad's Sherlock Holmes. Guy Ritchie, who has made his name directing flashy thriller-comedies about fast-talking geezers up to no good (Lock, Stock and Two Smoking Barrels, Snatch), now puts his spin on England's most famous private eye.

Holmes is the creation of Sir Arthur Conan Doyle, though it's unlikely the Victorian novelist would recognize his thoughtful, genteel, persnickety detective in Ritchie's Sherlock Holmes. This isn't a film for purists; on the other hand, you don't need to have any background on Holmes to get what kicks there are out of this rock-'em-sock-'em re-telling.

We meet Holmes (Robert Downey Jr.) and his trusty sidekick, Dr. Watson (Jude Law), while they're apprehending the evil serial-killer Lord Blackwood (Mark Strong), deep in some subterranean temple of black magic. There is much head-cracking, leaping and artful tossing off of bon mots. But Blackwood refuses to go the gallows quietly -- and his escape spurs the crime-fighting duo to scuttle around central London, beating up villains and unraveling a dastardly, mystical plot designed to bring down the entire government. (This is Doyle by way of Fight Club and a Dan Brown potboiler.)

Holmes here is something of a savant slacker, sarcastic and slovenly. (He can barely keep a wrinkled shirt on much less the neatly pressed deerstalker we associate with the sleuth.) He's also deep in a sniping bromance with Watson. (Like longtime lovers, they spat over whose waistcoat is whose.)

Downey and Law are charming and funny, even if their rapid-fire repartee seems designed for contemporary audiences. I would have actually liked Holmes more as a parlor comedy than an action flick. There was plenty of missed opportunity for wry observations and interconnected intrigue in the various colorful worlds of London that Ritchie only lightly sketched: Scotland Yard, Parliament, street vendors and fraternal organizations, as well as the bourgeois niche Holmes and Watson risk sullying with their dabbling in crime.

Instead, the plot received short shrift so we could get extended sequences of brawls, chases, explosions and -- for no real purpose -- the destruction of an entire ship. Ritchie heavily underscores all the action with slow-motion replay, complete with whooshing noises and jump cuts; it looks woefully dated, so very last decade.

A closer focus on plot over spectacle would have also spared us all the unnecessary (and obvious) CGI required to have people dangling off the half-finished Tower Bridge, with the cheesy vistas over 19th-century London. For instance, 1939's The Hound of the Baskervilles is not a bad Holmes thriller, and the danger-on-the-moors scene is just a lot of cheap fog on Hollywood back lot. A good story, dear Mr. Ritchie, is elementary.