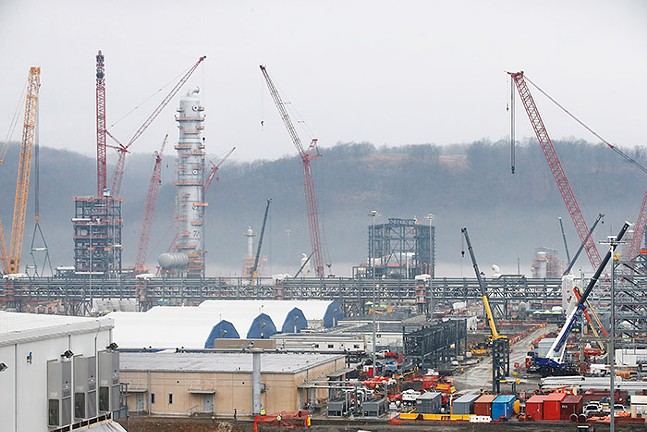 CP photo: Jared Wickerham
The site of a Shell ethane cracker plant, shown under construction in 2018, in Beaver County
Residents throughout Beaver County have reported a maple-syrup-like odor over the weekend. Shell Pennsylvania Chemicals responded on Facebook on Sun., Sept. 26, confirming the odor and informing people that the odor might be related to passivation activities in the cooling water tower, which are treatments that prevent corrosion, completed Thursday. The Pennsylvania Department of Environmental Protection has issued violations for the odor.

“The health and safety of our employees, contractors and the community are our number one priority. We apologize for any inconvenience this might have caused,” says the Shell Pennsylvania Chemicals post.

Inspectors from the Pennsylvania Department of Environmental Protection investigated the complaints and documented the odor as well as dust — unrelated to the odor — outside Shell’s permit boundary. The PADEP, however, has not found evidence that suggests the odor resulted from a leak.

On Mon., Sept. 27, the PADEP issued Shell a notice of violation for the odor and fugitive dust, and it considers this an open compliance matter, meaning that it is an ongoing violation of environmental law. Each day the violations continue is considered a separation offense. The notice of violations is neither an order or any final action by the PADEP

More than 40 residents have reported smelling the odor, which is the first large-scale smell event that has occurred due to the cracker plant that is currently under construction in Potter Township, 30 miles northwest of Pittsburgh.

Breathe Project, a coalition of professionals, academics, and citizens to improve air quality and eliminate climate pollution, posted about the leak on Monday, sharing a post in The News Alerts of Beaver County Facebook group where residents discussed that the smell could be ethylene glycol, a component of anti-freeze. Ethylene glycol, however, is characterized as odorless by the CDC, meaning that the smell is due to other chemical agents.

“Factual identification of the actual agents responsible for or released in association with the reported smells should be a high priority, in the absence of which assigning any potential health risk becomes very problematic,” says University of Pittsburgh environmental and occupational health professor and Breathe Project member James Fabisiak.

Shell Pennsylvania Chemicals did not specify which chemical or chemicals leaked or caused the odor. The leak was confirmed by an unnamed third-party environmental company, and Shell stated that an investigation is underway and that Shell is in communication with the PADEP.

“We would like Shell to be more transparent about incidents like this one — where they tell the community right away about what is crossing the fence-line of the plant and impacting what the community is breathing and smelling,” Breathe Project executive director Matthew Mehalik says. “This first case does not assure people of the community that their health concerns are being factored in primarily because Shell did not disclose what the possibilities of these emissions were despite it being several days since the incident occurred.”

Breathe Project encourages community members who smell the maple-syrup-like odor to report their experiences to the DEP at 412-442-4000.

Billions on way to attack abandoned mine pollution in Pennsylvania