Another Evening is a concept record detailing one insane night out 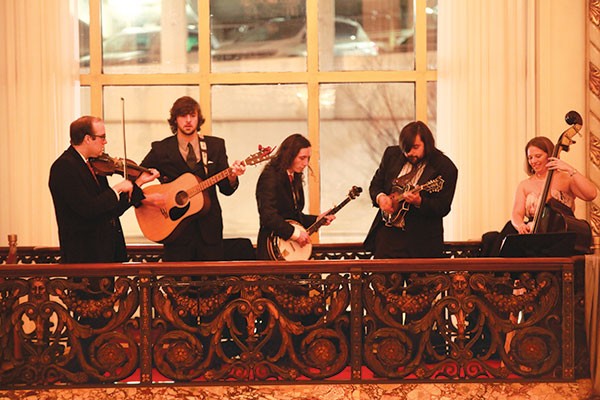 Photo courtesy of Todd Brunozzi
All dressed up with bluegrass to play: Shelf Life String Band

Lead singer and guitarist Derek Dysart and fiddler Rocky Youhon recently stood outside Pitt's Petersen Events Center, handing out show flyers. The crowd was mostly dismissive. "Local bluegrass, can you dig it?" Dysart asked a Pitt student, extending a flyer. "No, absolutely not," she said, looking him dead in the eye. Ironically, the show was that of the Avett Brothers, who have become wildly popular with a sweetened, rock-like take on old-school Americana.

"There is just something about the bluegrass label," says Dysart.

Meanwhile, at bluegrass festivals, the five-member band has divided crowds with its brisk pace and rock 'n' roll covers. Some older attendees have walked off (apparently, that's the nastiest way a bluegrass festival crowd shows disapproval). The band has since learned to start with a few slower numbers to avoid this small-scale Dylan-at-Newport moment.

But with its self-described "fast-assed bluegrass," Shelf Life has managed to win over those in the part of the musical Venn diagram that includes people willing to hear an Appalachian folk band, but also are into the Ramones. The band has earned a Wednesday residency at the Park House, on the North Side, and has now completed its first album.

Singer/songwriter Joe Dep, the group's banjoist, admits he "snuck the whole bluegrass thing into the band" in its formative days. The group started in 2007 as a guitar duo consisting of Dep and Dysart. "Once we recruited Andy [Boehm] on mandolin, we were halfway to being a bluegrass band," recalls Dep, who had always wanted to try the banjo since hearing Jerry Garcia play it. He began practicing the instrument on his own and took it to rehearsal one day. It worked, and they completed the sound by adding Youhon on violin and Trish Imbrogno on double bass. (Since Dep started attending Berklee College of Music in Boston, they've also brought in Mark Naylor to pinch-hit on banjo at some gigs.)

The band's repertoire is wide, and includes twanged-up versions of Talking Heads' "Road to Nowhere," Radiohead's "Creep" and Gorillaz' "On Melancholy Hill."

Its debut, Another Evening and Other Tales, consists of all originals. It is a concept record detailing one insane night out in which the narrator encounters outlaws, prostitutes and snake-handlers. Each song details a successive hour, from 9 p.m. to 6 p.m., and it has the pace (if not the instrumentation) of city night life.

Dysart says that sound — to the right of the Avetts and the left of Earl Scruggs — comes naturally to the group. "I don't think we should sound like a mountain band," he says. "We never see a mountain, besides Mount Washington."