Democrat Josh Shapiro joined more than 50 health care and service industry workers at a campaign stop in Downtown Pittsburgh on Monday, where he touted his labor record as attorney general and restated his support for workers as an aspiring governor.

During an outdoor rally on the steps of Smithfield United Church of Christ and a subsequent panel discussion inside, Shapiro fashioned himself as a clear ally of the labor cause in contrast to his Republican opponent Doug Mastriano. He told the crowd the Republican-controlled state legislature is poised to introduce right-to-work laws that would curtail union organizing, and claimed Mastriano would, if elected, sign them into law.

Shapiro promised the workers he would instead invite them to a “big old veto-signing ceremony” outside the state capitol.

During the event, led by SEIU Healthcare workers and other union allies, Shapiro largely avoided talk on specific policies or legislative initiatives he would pursue to advance the labor cause, but stressed that his support for workers is tied to broader commitments to addressing issues like racial, environmental, and criminal injustice.

“You can't ignore the inequities that exist in our system,” Shapiro told the workers. “We see it in our marketplaces, our economic centers, we see our criminal justice system. We see environmental risks. And I think you have to be honest with yourself about those negatives and seek policies or positions that are ultimately going to address those underlying issues before you can pass legislation or regulations that affect funding and budgets."

Shapiro said his record as attorney general shows his willingness to stand up to institutional powers — including construction giants Glenn O. Hawbaker and the Roman Catholic Church — and told the workers they could expect the same attitude if they voted him into the governor’s mansion. 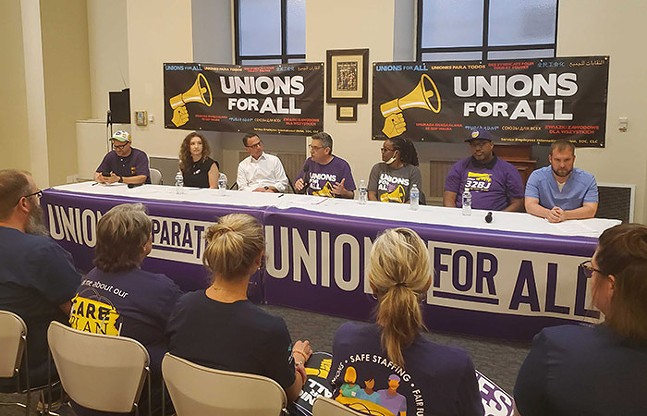 Other speakers voiced support for Shapiro while describing the challenges and triumphs they’ve witnessed as part of a new wave of service sector organizing that’s quickly gained ground since the onset of the coronavirus pandemic.

“Elect Josh Shapiro as governor on Nov. 8 because we need a leader who respects us and will expand unions across our commonwealth and lead our unions for our movement,” said Nila Patten, a hospital worker at UPMC Presbyterian who said she’s been leading efforts to start a union there since 2015.

While swathes of service industry workers have successfully organized in Pittsburgh during the past few years, efforts to unionize the city’s lucrative medical industry have been largely thwarted.

Joel Gundy, a panelist and UPMC nurse, said the nonprofit medical behemoth has so far led a successful scare campaign against aspiring organizers.

“[Nurses and hospital staff] all want a union at this point,” Gundy said. “Almost anyone who can speak to you candidly will say the problem is UPMC has created a culture of fear around us.”

SEIU Vice President Neal Bisno said the cause was gaining momentum despite some roadblocks.

“Workers across this country are doing what they have to do about it,” Bisno said. “They are taking matters into their own hands in ways that we have not seen in generations in this country. They are organizing, they are striking. They're demanding unions for all, no exceptions."

Shapiro described the current political climate as a period of setback within a larger narrative of progress on issues like workers' rights and other progressive causes. He said history shows workers can emerge “in a better place” if they chose to “put in the work our ancestors put in, and promised to fight for workers' rights alongside voter rights and abortion rights.

“We are not only going to extend the union membership here in Pennsylvania, we're protecting a new way of life in America that protects your rights and everything you love,” Shapiro said. “We will make sure ... that women can govern their own bodies. We are going to make sure that… the right to vote is protected and that whoever you choose to vote for it will be protected.”