The charges accuse the Texas-based pipeline company of using unauthorized chemicals in their drilling fluid, releasing it into state water, and not reporting the spills 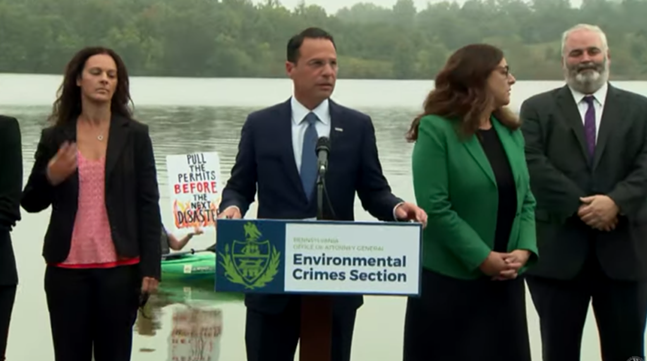 Forty-five of the charges, filed against Energy Transfer LP, are for allegedly releasing industrial waste at 22 sites across the route of the still-under construction Mariner East 2 pipeline, from Raystown Lake in Huntingdon County to Uwchlan in Chester County.

The other three charges against Energy Transfer are for subcontractors using unapproved chemicals in drilling fluid, contaminating water supplies, and a felony charge for not reporting the spills to the state Department of Environmental Protection.

Announcing the charges at a state park that was polluted with at least 21,000 gallons of drilling fluid from the pipeline’s construction, Shapiro tried not to downplay the nature of criminal charges against Energy Transfer.

The investigation was ongoing, Shapiro said, and showed corporations that they would be held accountable for violating state environmental laws.

However, the penalty for charges filed are fines, Shapiro said, and a guilty ruling would not influence if the project will be completed. The limited scope of the consequences for Energy Transfer from the start, Shapiro said, concerned him.

“The laws we have to stop these crimes are simply not enough. We can’t rely on these out of state companies to police themselves,” Shapiro said. “Hell, they work for shareholders, not for us. It’s the government’s job to set the ground rules to protect us and protect the public.”

He called for Pennsylvania’s Republican-controlled General Assembly to increase penalties for environmental crimes in light of the charges.

The accusations leveled against Energy Transfer on Tuesday, which also built and owns the controversial Dakota Access pipeline, are not new.

The DEP has fined the company millions of dollars for more than 100 violations over the last few years as construction has crept asymptotically towards completion. But none of those fines have stopped the pipeline’s construction.

Construction on the pipeline, long sought by the state’s gas industry, has been ongoing since February 2017. At the time, the company expected to finish construction by fall.

But the $2.5 billion project has faced frequent construction suspensions over the years due to environmental concerns by the DEP, judges, the state’s Public Utility Commission, and the COVID-19 pandemic.

If completed, the pipeline will transport fracked ethane, propane and butane gas from Southwestern Pennsylvania to the Marcus Hook export facility south of Philadelphia. From there, the gas can be exported overseas.

As the project has dragged out, Energy Transfer has used an old, converted gasoline pipeline running parallel to newer pipeline to carry smaller quantities of gas east.

All eyes will now be on the DEP’s response to the charges. Environmental advocates pointed out that the Wolf administration has the right to modify, suspend or revoke permits under state environmental law if a permit holder is “causing or is creating a danger of pollution of the waters of the Commonwealth.”

However, Wolf has previously said that pipelines economic benefit outweigh their environmental harm.

In 2019, the FBI even eyed how the Wolf administration approved the pipelines permits, and if Wolf received anything in return, though nothing has yet come from their questioning.

Throughout the project, environmental advocates have pushed for the DEP to more thoroughly vet Energy Transfer’s permits and actions. Those calls became sterner Tuesday, environmental groups across the spectrum united to call for the Wolf administration to take away Mariner East 2’s permits.

“The Mariner East disaster is Governor Wolf’s responsibility. He must stop this right now, and we will continue to fight to make sure that he does,” Food & Water Watch organizer Ginny Marcille-Kerslake said in a statement. “Our communities should not be jeopardized so that a major polluter can have another pipeline to ship dangerous liquids that will be turned into plastic junk.”

But in a statement Tuesday evening, a spokesperson for the DEP said in a statement that the department would “review the charges and determine if any additional actions are appropriate at this time.”

The spokesperson added that the department had cooperated with Shapiro’s investigation, and that Wolf also supported strengthening pipeline regulations.

Rep. Danielle Otten (D-Chester) ran and won office in 2018 as a vocal critic of the Mariner East 2 pipeline, which runs 50 feet from her house.

She told the Capital-Star on Tuesday that the charges had “vindicated and validated” the complaints she and her neighbors had lodged about the project for the past four years.

Otten added that she thought the charges would galvanize opposition to the pipeline among her colleagues.

“I think you’re going to see not just me, but more than more than just me, calling for the revocation of these permits,” she told the Capital-Star.

As to Shapiro’s concerns, Otten said she was working on legislation to expand the penalties for companies that break state environmental law. Such a bill is complicated, Otten said, by bankruptcy laws which can allow companies to skirt heft financial penalties.
Stephen Caruso is a reporter at the Pennsylvania Capital-Star, where this story first appeared.