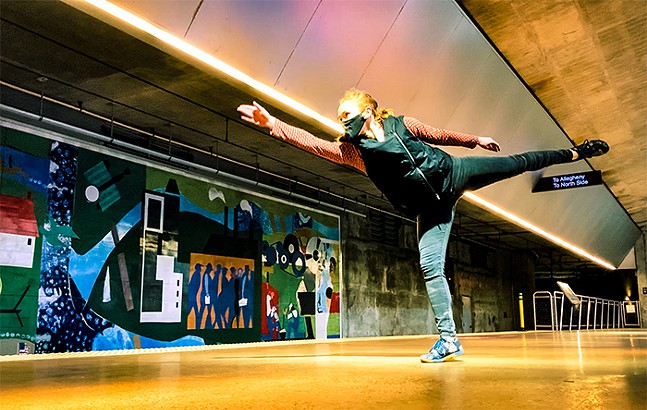 Photo: Shana Simmons Dance
Joanna Dehler in Constructed Sight: Winter
After nearly a year into the pandemic, it's no secret that everyone has grown a little tired of watching performances online. Shana Simmons Dance understands this, which is why the Pittsburgh company decided to mix things up with their latest project.

To address this, she and her fellow choreographers, Brady Sanders and Jamie Erin Murphy, will present Constructed Sight: Winter, a new online film series showing dancers engaging with public art throughout Pittsburgh. Simmons says each film lasts between two and a half to eight minutes, making them easier to digest for viewers, and keeping the program going at a swift pace.

Constructed Sight: Winter — taking place over the course of two weekends in March — marks the second round of films the company launched in response to in-person shows being canceled or postponed due to COVID-19. The first program was released in September 2020.

Simmons says Constructed Sight: Winter differs from the September program, which took place over the course of three weekends. She explains that while she, Sanders, and Murphy worked together on the initial batch of films, the resulting works were wholly independent of each other.

“As a trio, we collaborated on the idea and concept and everything, but as far as the independent dance films went, all three of us came up with our own concepts, our own pieces of artwork,” says Simmons.

In comparison, the films of Constructed Sight: Winter are far more linear. The six films will show Simmons, Sanders, Murphy, and other dancers — the roster includes Joanna Dehler, Emily Jaikaran, and Allegra Golembiewski — interacting with prominent works of art at three of the city's light-rail T-stations. The films will transition using the large geometric shapes of Sol LeWitt's work found in the underground T-station at Wood Street.

“Each dancer gets absorbed by one of the shapes on the wall,” says Simmons, whose own piece centers around Pittsburgh Recollections, a ceramic tile mural by artist Romare Beardon, located at the Gateway Center station in Downtown.

From there, the different works are threaded together through movement and visuals. “Each film has an element or hint towards the next film,” says Simmons.

Even so, she says Constructed Sight: Winter still offers a wide range of films, with styles varying from a performance art piece to a music video.

Each piece is described as being “thematically based on the artwork, architecture, and history of the surrounding area within and outside each station.” One film might “tap into the estimated price of the artwork and lack of recognition the artwork receives,” functioning as a way to deliver art and history to a global audience.

“We're just trying to help advertise public works of art in Pittsburgh and bring awareness to them as well,” says Simmons.

Unlike the first series, Simmons invited a number of international and national acts to contribute to the program. Using an open call application process, the company was able to bring on the Kusanagi Sisters, a sibling duo from Japan, as well as dancers and performers from Florida, Texas, New York City, Minneapolis, and Philadelphia.

“I felt that it was important to have a variety of individuals represented,” says Simmons. “I like to empower and encourage other artistic voices to come forward.”

Besides highlighting public art and the talent in Pittsburgh and beyond, Constructed Sight: Winter also intends to make dance more enjoyable to a wider audience. Simmons says one way they did this was by taking on alternate personas who appear in pre-recorded segments and serve as emcees throughout the event.

“We have our own individual characters that help facilitate the evening,” says Simmons, whose persona appears as a well-dressed woman in gloves and a black wig, sitting in front of a fireplace with computer-generated flames projected into it. Murphy, meanwhile, plays an oblivious character who always shows up late and has no idea what's happening.

Photos: Shana Simmons Dance
Constructed Sight: Winter
“I think it just makes dance more accessible to people because if you don't know dance, you might tune in, but as soon as you are greeted by someone … and the person is funny and entertaining, you're more likely to watch the whole thing, especially because they're helping shape your experience,” says Simmons.

Constructed Sight: Winter will also stream on YouTube Premieres because the platform offers a chat feature, giving audiences who are watching the option of interacting with each other during and after the films.

Simmons says her company plans on returning to in-person, outdoor events once the weather warms. This includes a performance set for May at nearby Indiana University of Pennsylvania.

For now, though, Simmons sees events like Constructed Sight: Winter as a way to keep supporting dancers both creatively and financially, as suggested donations from the event go towards the participating performers. She also hopes the online event will draw viewers in by being lighter, easier to consume, and more communal.

“Constructed Sight is a really fun vibe,” says Simmons. “We take our work seriously, obviously, but it's not there to absorb you in this highly-focused way. It's to generate this feeling of activity, that you're surrounded by people even though you're not.”
Constructed Sight: Winter. Sat., March 6-Sun. March 7 and Sat., March 13-Sun March 14. Available on YouTube Premiere. Free. Suggested donation $5-10. shanasimmonsdance.com