In the beginning -- that would be about five years ago -- there were Walnut Grill and Shady Grove, sibling restaurants with an upstairs/downstairs relationship in the heart of Shadyside's Walnut Street. More recently, a blending of these two -- dubbed Walnut Grove, naturally -- has opened in a couple of tony suburban locations. All but Shady Grove emphasize entrees in the contemporary American mode: classic dishes updated with trendy ingredients and preparations.

With its bar doing swift business and not a steak, filet or chop in sight, Shady Grove is clearly the kid in this casually sophisticated family. It is also the kind of restaurant there are a million of in, say, New York City, but not enough of in Pittsburgh: a place to get a simple sandwich, wrap or pizza that is a couple of steps up, both in atmosphere and menu, from a traditional deli or pizza parlor. Best of all, there is outdoor seating. On a warm spring evening, the place was packed, with coveted tables along Bellefonte Street at a premium.

We settled onto barstools around our tall indoor table and perused the menu. It was in keeping with the Walnuts of the family, with an emphasis on international flavors from Asia, Mexico and the Mediterranean alongside familiar American items.

Wood-fired pizza is one of the staples of Shady Grove. While the standard array of toppings is available a la carte, the pre-designed pies, such as buffalo chicken and pierogi, follow in the tracks of the rest of the menu: different, but not too different. Our first chicken pesto pizza arrived with a blackened crust; after confirming that this was unintentional, we were cheerfully provided a replacement.

The menu describes the dough as "hand-tossed traditional," but we found it unusually sweet, with a texture that married chewy (the interior) and crispy (the second pie's beautifully browned top). It reminded us of very good whole-grain rolls. It worked reasonably well with the moist chicken and simple, herbal pesto, but we suspect the sweetness would conflict with more traditional pizza toppings, such as pepperoni.

Wings are available in just four flavors, including a hickory rub that Jason was eager to try. Since wings are deep-fried, it always seems a shame to drown their crisp skin in sauce; Shady Grove's hickory rub left the crispiness intact while adding a smoky, mildly spiced flavor that needed no dressing. Which was good since the accompanying blue-cheese dressing was cloyingly sweet. The wings themselves were on the small side.

Sweetness was also an issue with Angelique's meal, a grilled tuna melt with cheddar and tomato, accompanied by cream of tomato soup. The best tuna salads balance the fishy flavor of their main ingredient with creamy mayonnaise and zesty onion, but, unable to leave this simple formula alone, many cannot resist adding "secret ingredients," for better or worse. In this case, it was for worse. Something in "D's homemade" tuna salad rendered it unsubtly sweet, as if it had been flavored with fruit preserves. Meanwhile, the tomato soup was more like a bowl of straight-up marinara sauce: pasty, overly sweetened (again) and too intensely-flavored to be eaten with a spoon.

Thursday night is taco night, and Jason sampled all four varieties on offer. Each meat was paired with a different topping: spicy fried fish with a fruit salsa; crumbly beef and shredded chicken, both with classic tomato salsa and cheese; and BBQ pulled pork with just cheese and a smattering of greens. Treated more as wraps than as traditional tacos, they were all successful, and surprisingly spicy, too. We don't expect a lot of pep when bars try their hand at Mexican, but Shady Grove's kitchen proved to be pleasingly bold.

Finally, a generously proportioned spinach salad belied its description as a side. Here, Shady Grove eschewed the traditional warm bacon dressing for a Mediterranean flavor, with artichoke hearts, roasted red peppers, crumbled feta and balsamic vinaigrette. The hearts were plentiful and mild, and the feta wasn't too salty, but the peppers were somewhat bitter,

We liked the selection of simple but satisfying fare at Shady Grove, and the casual but not slouchy atmosphere. If the kitchen would just ease up on the sugary ingredients, dining at Shady Grove would be sweet. 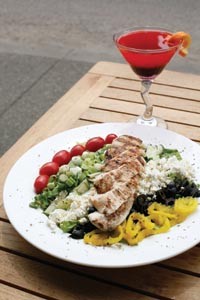