ShadoBeni pleases with a sweet and spicy vegan menu 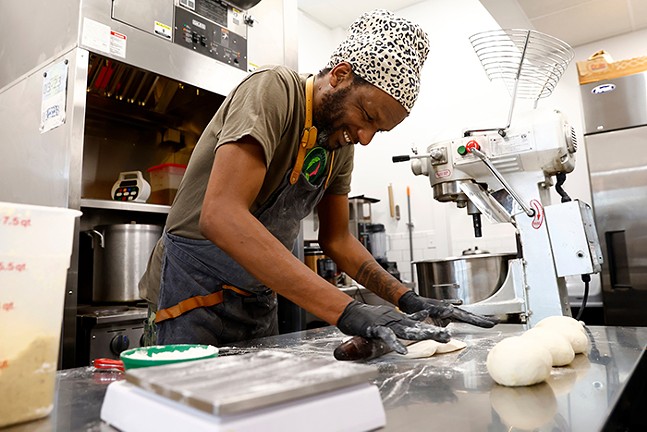 CP Photo: Jared Wickerham
ShadoBeni owner Ulric Joseph prepares roti at his North Side restaurant.
Pittsburghers first got a taste of Ulric Joseph’s vegan Trinidadian food in local farmers markets. Now, after years of selling his plant-based menu at pop-up stands, there’s good news for anyone craving his unique offerings more often. Joseph’s new restaurant, ShadoBeni, is bringing delicious Caribbean flavors to Pittsburgh any time and any season at his new brick-and-mortar location on the North Side.

I’ve seen their stand, but I’d never had a full meal, so I was excited to go and see what the new restaurant had to offer. The small, cozy spot has several tables for dine-in service, and also offers online ordering for folks who want to get their order to go. I arrived shortly after they opened around 11:30 a.m., and browsed the menu for a couple of minutes, trying to narrow down what sounded like a good, filling meal on a day where I hadn’t had breakfast. 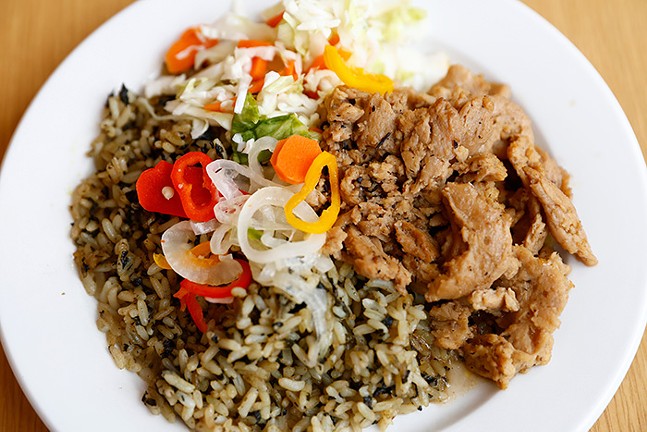 CP Photo: Jared Wickerham
Bhaji rice, chick’n, pickles, and spicy slaw from ShadoBeni
I landed on the rice bowl, described as coming with coconut rice and a selection of different toppings. On this day, they had Curry Stewed Soya, Okra Choka, Spinach Choka, Channa and Potato, and Pumpkin. I went for the Channa and Potato and the Spinach Choka, figuring it’d be good to have some protein and greens along with my meal. For sides, I got the plantains and the spicy slaw, with a ginger beer to wash it all down.

The food came out quickly and smelled delicious. I dove first into the sides, starting with the spicy slaw. The slaw comes with red cabbage and red and yellow peppers. The peppers give off that crisp sweetness upon first bite, then give you a back of the tongue tingle of spice. Overall, the slaw a had great texture and a tart flavor from the dressing.

The plantains were perfectly browned with crispy, caramelized bits around the edges. For a side, the tender and sweet plantains really wowed me. They had a hint of earthiness, along with the sharpness of the crispy bits. Contrasted against the softer, more yellow parts, these plantains were made with a caring hand. A side cup of the plantains provided about seven hefty slices, so it made for a great opener for the rest of my meal.

When I got to the rice bowl, I decided to first try each element of the dish on its own. The Spinach Choka is traditionally prepared with garlic, onions, and scotch bonnet, but I didn’t get any of the heat in this version. It still tasted well-seasoned behind the vegetal flavor of the spinach.

CP Photo: Jared Wickerham
Plantain chips with avocado salad (Zaboca) from ShadoBeni
I moved on to the Channa and Potatoes, a combination of chickpeas and chunks of potato seasoned with what looked like turmeric, cumin, and other spices. It was packed with flavor and absolutely delicious. I tried a bite of the rice and while I didn’t get any coconut flavor upfront, it was also well seasoned.

Lastly, I ordered mango chutney as a sauce for my bowl. Adding it to the pile and mixing it all up made for the perfect bite: sweet, spicy, and tangy, it was just what the dish needed. Still, I regretted adding in my side of the restaurant’s hot pepper sauce, which I’m told is fire.

Once I got the perfect bite down, I was sold on ShadoBeni. I can’t wait to go back with a friend and try more of what they have to offer, including their smoothies and vegan cookies.ShadoBeni. 1534 Brighton Road, North Side. shadobeni412.com