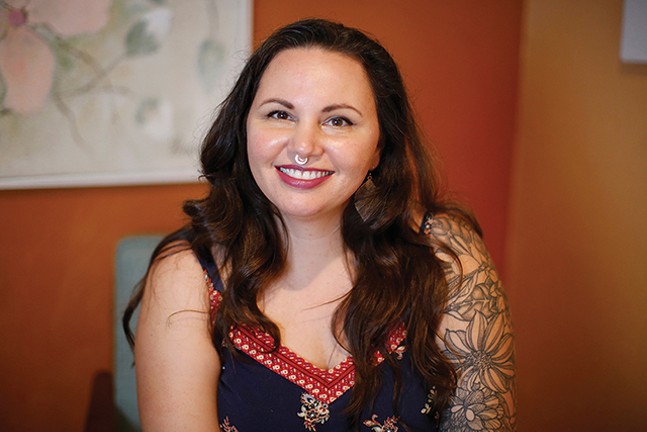 Last year, I held a workshop about dirty talk in phone sex work at a club in Canada. Given that it was a space designed for public enactments of sexuality, I wasn't surprised to find my presentation competing with jumbo TV screens playing pornography. An amusing coincidence caused me to laugh mid presentation when I realized one video featured a friend of mine. An occupational hazard, to be sure.

Clubs themselves are also ghettoized. It is not uncommon for them to be located in warehouses off the beaten path. But this also opens up possibilities that can't be found in more mainstream establishments. The very point of both the clubs and pornography itself, is to express that which isn’t being expressed, and to do what is typically done privately, in public. For this reason, both are counter-cultural. In regards to pornography specifically, Dr. Laura Helen Marks says in her new book, Alice in Pornoland, “Pornography seeks to speak the unspoken, to lay it all out there sexually, in a culture that demonizes sex.” But clearly this also applies to sex clubs.

With Halloween approaching, I brace myself for yet another week of recycled articles bemoaning the over-sexualization of Halloween costumes. Listicles proudly recommend non-sexualized costumes. Self-avowed feminists criticize costume producers and wearers alike. A moralistic panic around the “pornification” of Halloween inspires these authors.

Yet, even a cursory investigation into the history of pornography tells us that the connection between the spooky and the pornographic is no accident. In Episode 29 we speak with Dr. Laura Helen Marks about her new book exploring this history.

She traces the history of pornographic tropes, and their peculiar connection to Victorian culture and literature, demonstrating that our first visual pornographies were Victorian, and importantly, the monstrous that is characteristic of the Gothic era, is ripe for pornographic and sexual exploration. She says, “The complex sensations such creatures arouse are spaces for exploration and re-visioning of sexual identity.”