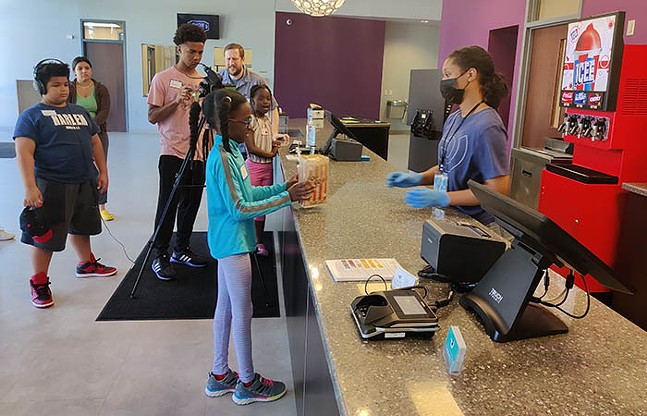 Photo: Courtesy of The Lindsay Theater and Cultural Center
A group of young students shoots a scene inside The Lindsay Theater and Cultural Center as part of Cinema Maker Sessions
Sewickley got a place to watch movies and more with the Tull Family Theater. Backed by its namesake Thomas Tull, the local billionaire and former head of Legendary Entertainment, the nonprofit theater has spent the last several years presenting new films, guest speakers, and public programs, often serving as a more accessible way for communities outside of Pittsburgh to experience the arts.

Now, the theater begins 2023 with a name change and an inaugural event, both of which signal a renewed commitment to its base.

As of Jan. 1, the Tull became known as The Lindsay Theater and Cultural Center, or The Lindsay, for short. The Theater revealed that the name comes from its sponsor, the Corry Family Foundation, as a way to memorialize Lindsay Nicole Corry, a Pittsburgh native and Carnegie Mellon University grad who, at 30 years old, died in August 2021 after a battle with cancer.


The Foundation, which has the stated mission of helping young adults and children facing "identity-altering challenges and disease," gave a financial gift that, according to a release, will keep The Lindsay running for the next decade.

Alexis Corry Kappel, a representative of the Foundation and Lindsay's sister, says her family has "invaluable memories" of her family enjoying the Theater together.

“We have witnessed the Theater’s breadth of service and programming, and believe this is a fitting way to honor Lindsay’s exuberance, creativity and
compassion," adds Kappel, who also owns the Sewickley boutique Lex & Lynne.

Photo: Courtesy of The Lindsay Theater and Cultural Center
Alexis Corry Kappel (left) and the late Lindsay Nicole Corry
Carolina Pais-Barreto Thor, CEO of The Lindsay, says the name "ushers in a new era for the organization” and reflects its "growing service to the region, beyond cinema.” While The Lindsay has catered mostly to cinephiles with screenings, local premieres, artist residencies, and events like the 48 Hour Film Project, it has expanded its options to live theater, dance, and music.

The Lindsay also focuses on area youth, senior citizens, and the "special needs community." Part of that includes Cinema Maker Sessions, a program meant to expose area middle-schoolers to career opportunities in the film industry. It also claims to be the first theater in Pennsylvania to provide weekly Open Captioning screenings for audiences with hearing loss.

The Lindsay also offers the free use of its screening room to local filmmakers like Zoe Xandra, who will launch her Slow Drift Film Festival there this month.

Taking place Thu., Jan. 5, the Festival is curated by Xandra, a Point Park University graduate who founded the Pittsburgh-based company Slow Drift Productions. Described as showcasing thriller, horror, and sci-fi works by women in Pennsylvania and New York, the event will feature 10 short films, including two by Xandra.

“Horror and thriller films have been long affiliated with the region because of the work of the late George Romero, yet in the five decades since Romero first released his films, women have not been widely recognized for their work in these genres,” says Xandra, referring to the late Night of the Living Dead director. “This festival seeks to change that and encourage women’s artistic development.”

In terms of the coming year, Thor promises that, despite a new name, audiences can expect much of the same from The Lindsay, only with some additions and improvements.

“Operations will continue as usual, with the trusted wide selection of films, cultural and community events offered 365 days a year,” Thor says, adding that the Center will continue to focus on "accessibility and inclusivity," as well as the mission to "strengthen cultural, educational, and entertainment experiences northwest of Pittsburgh.”
Slow Drift Film Festival. 7 p.m. Thu., Jan. 5. The Lindsay Theater and Cultural Center. 418 Walnut St., Sewickley. Free. Reservation required. thelindsaytheater.org