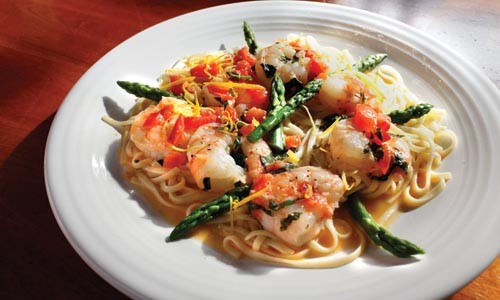 We love restaurants that bypass trendy one-word names for the straightforward yet evocative monikers such as "inn" or "hotel." Such holdouts remind us of the days (not that we remember them personally) when hotels were Main Street establishments and community centers, not stuccoed piles out by the highway or sleep-stops for conventioneers. In Sewickley, with its well-preserved business district, it's easy to imagine the lives that once passed beneath the roof of the Sewickley Hotel.

In the present day, the interior of the Hotel -- no lodgings available -- shows its age in the best sense, with exposed brick and pine paneling with plenty of patina. But the vibe isn't all from the past; our server informed us that new ownership recently came in and cleaned house, which has resulted in an atmosphere that's welcoming to old-timers and newcomers alike.

The offerings reflect this balance as well. The brand-new menu incorporates a fair amount of the old one, including such time-honored dishes as Sewickley chicken (marinated breasts slathered in barbecue sauce). While the wood-grilled theme is far from cutting-edge, it doesn't feel fusty, either, and we had no problem finding options that were not merely representative, but enticing.

The house pâte made a good start: a substantial slab of chicken liver studded with truffles and served with caramelized onions, cornichon (pickled gherkins) and grenadine jam -- which appeared to be made with roasted red pepper. The pâte was traditional and simple but rich. The distinctively earthy notes of the truffles grounded this pâte, while the accompaniments enlivened it with sweetness and zest -- except for the jam, which tasted unpleasantly bitter. Beyond that, we only wished for more of the crusty French bread.

We made two other starters vanish quickly. Turtle soup -- a throwback dish if ever there was one -- could have been called turtle chili. It was dark, deep and intensely flavored with herbs and spices for a piquant, satisfying flavor.

Though the Tijuana quesadilla was listed as an appetizer, it was an ample meal for anyone interested in a crisped flour tortilla stuffed with savory chicken or succulent crabmeat (we chose the latter), housemade salsa and sour cream.

Jason was already set on ordering a steak when he took a walk through the dining room, heady with the aroma of the nightly prime-rib special that all the regulars seemed to be having. Not one to miss a hint, Jason ordered the queen cut, a mighty slab of pink beef served with neither jus nor horseradish. The kitchen is confident in this dish, and its beefy flavor merited it: Jason's only complaint was a slight touch more toughness. The side of green and wax beans with strips of carrot provided a nice, bright contrast, except that the carrots were scarcely cooked, resulting in a bit more crunch than might have been ideal.

Angelique ordered the Light Up Night burger. Of the six burger varieties on the Hotel's menu, this one, topped with blue crabmeat, bacon, avocado and pepper-jack cheese, was clearly the one not to be missed. The eight-ounce patty of hardwood-grilled Angus beef -- Kobe was also available -- was beefy and juicy, with plenty of flavorful char. But the toppings that were so enticing on the menu were a letdown on the burger itself. The crabmeat was succulent and the bacon salty, but the cheese and avocado, whose creamy textures and mild but distinctive flavors were needed as foils to all that hearty meat, were so scant that they hardly registered.

We rounded out our meal with two desserts, berry pie and chocolate layer cake. The cake was typical of many restaurant cakes we've had: so generously sliced that it was practically the size of Jason's prime rib, with a bouncy texture but flat chocolate flavor. Nonetheless, the pie redeemed our final course with its excellent, flaky crust, fresh, sweet-tart berry filling and cloud of light but rich whipped cream on top.