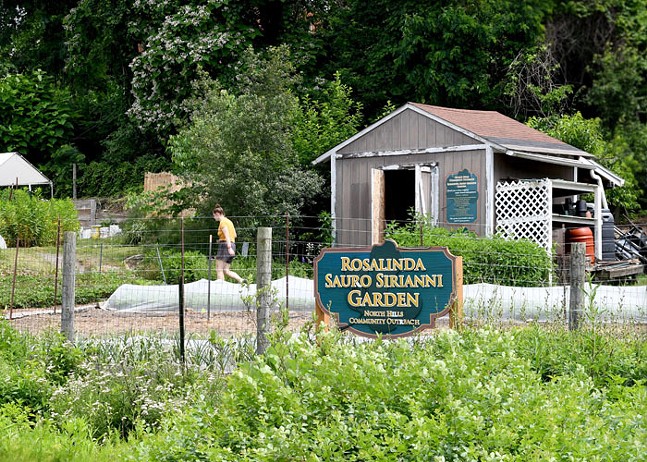 Funding comes through the Pennsylvania Farm Bill's Urban Agriculture Infrastructure Grant Program. The projects funded include agricultural infrastructure such as greenhouses, raised beds, solar equipment and tools to “provide urban ag operations every opportunity to succeed as they work to feed and build their communities,” the department said in a Jan. 31 release.

“We're thrilled that the state has made this investment in urban agriculture, especially as it relates to improving food sovereignty and supporting the next generation of growers,” Madeleine Sheinfeld, Garden Coordinator at North Hills Community Outreach, tells Pittsburgh City Paper.

NHCO’s Rosalinda Sauro Sirianni Garden is a volunteer, community-supported organic garden. Sheinfeld says the produce harvested there is distributed via the organization's food pantry locations in Avalon, Millvale, and Allison Park. They also distribute seedlings a few times a year, she says. “We hope to increase this aspect of our garden x pantry collaboration with the increased seed-starting space of the bioshelter,” she adds.

"Since the grant program's inception through the 2019 PA Farm Bill, the Wolf Administration has invested more than $1.5 million in urban agriculture through 93 projects across 19 counties," adds Redding.

North Hills Community Outreach is hoping to have their project completed by spring 2023, according to Sheinfeld, who adds that “those interested can look for updates and donate to the project at nhco.org/bioshelter.”