If there's a flaw in this production, it's not worth noticing. 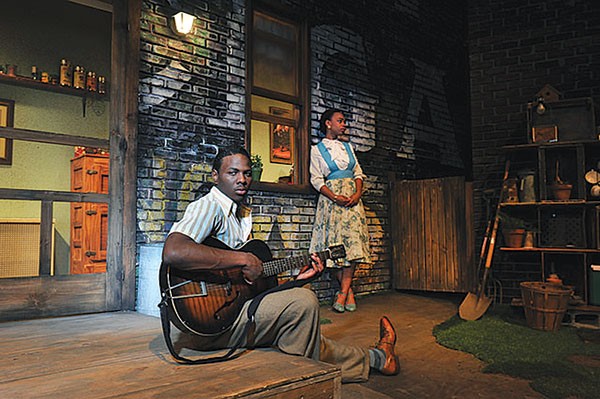 The School of Drama at Carnegie Mellon University jumps into its second century with both feet in an exciting yet moving production of August Wilson's Seven Guitars. The 1996 New York Drama Critics' Circle Award-winner for best play — it was nominated for the Pulitzer, Tony and Drama Desk as well — blends poetry, anger, hope, despair and more relevance than most Americans would like to admit.

It's 1948 in Wilson's Hill District. Yes, there's actually a guitar or two, but it's the seven characters who are being played: by the Fates, the Man, and even Wilson using their voices to realize the blues. Fill in your own interpretation. Despite whatever efforts go into one's ambition, doom is inevitable. The show begins with the funeral of its hero. The backstory paints in the details of futility.

But don't imagine this a cheerless story. Director Cameron Knight seamlessly blends music, movement and stunning visuals with Wilson's words. If there's a flaw in this production, it's not worth noticing.

The contributions from the talented design/tech team add up to a greater whole. Dan Daly's set of a Hill District backyard is richly layered yet still evokes urban claustrophobia and decay — side-by-side with a garden. Jamie Gross' costumes capture the time and accentuate each character's personality (especially, oh my, for the seductive Ruby). Choreographer Tomé Cousin provides the right swings to their steps. Lighting and sound (designed by Will Gossett and Almeda Beynon, respectively) work without being noticeable. Applause also to stage manager Tina Shackleford, dramaturge Rachel Abrams and voice/speech coach Janet Madelle Feindel.

There are no minor characters in Seven Guitars. Each contributes to the harmonies and themes of the ensemble; each has notable solos. The CMU actors capture the voices and rhythms as well as (and often better than) professionals I've seen: Mitchell Edwards as the guitarist Floyd "Schoolboy" Barton; Jean Floradin and Erron Crawford as his sidemen Canewell and Red Carter; Johari Mackey as his lady, Vera; Harron Alexander as the shaman-like Hedley; and Alexis Floyd as the sultry Ruby.

August Wilson is known for his long plays, but Seven Guitars' near-three hours flies by at CMU.