MAGIC • IRL
Prepare to have your mind blown as Liberty Magic reopens its doors for “one of the important forces in magic today,” Chris Capehart, the Downtown theater’s first magician to return to a live in-person show after a year of being closed due to the pandemic. Capehart, an accomplished street performer who has dazzled audiences in theaters around the world, specializes in close-up illusions, transforming century’s old magical props into modern spectacles. 7:30 p.m. Continues through Oct. 29. 811 Liberty Ave., Downtown. $40-75. trustarts.org

EVENT • IRL
Interior design enthusiasts can gather at the David L. Lawrence Convention Center for the annual Fall Home Show. Described as the region’s “top home improvement and building professionals show,” the event will feature the latest designs and products for the autumn season. If you’re looking to remodel your home or even just admire the work, the convention offers hundreds of exhibits and demonstrations, including celebrity chefs and professional designers. 10 a.m.-10 p.m. Continues through Sun. Oct. 10. 1000 Fort Duquesne Blvd., Downtown. $4-10. pghhome.com/attend-the-fall-show-2021

WRESTLING • IRL
Wrestling fans new and old are sure to enjoy Night Moves at The Priory. Hosted by Enjoy Wrestling, a progressive new independent promotion, the night will include a technical head-to-head between Lee Moriarty and Darius Lockhart. MV Young will also be the first to defend an Enjoy Wrestling title in his fight against Max The Impaler. Several team match-ups will round out the evening, with plenty of drama and action to spare. 7 p.m. Doors at 6 p.m. 614 Pressley St., North Side. $20-40. Tickets at the door.

KIDS • IRL
If your family is looking for something Jurassic this October, Dino Stroll will have giant, life-like dinosaurs on display inside the Monroeville Convention Center. The touring event includes 75 animatronic, prehistoric monsters representing various periods, from Triassic, Jurassic, and Cretaceous. Food donations will also be accepted at the event for Dino Stroll’s Stomp Out Hunger charity. 10 a.m.-5 p.m. 209 Mall Plaza Blvd., Monroeville. $24.99. dinostroll.com

MUSIC • IRL
Sphinx Virtuosi, described as “one of the nation’s most dynamic professional chamber orchestras,” comes to Carnegie Music Hall for an incredible night of music. Sphinx Virtuosi is comprised of 18 top Black and Latinx classical soloists who bring a fresh take on chamber music to venues across the U.S. Performing for sold-out crowds is nothing new for this group, so get your tickets soon. 7:30 p.m. 4400 Forbes Ave., Oakland. $45. chambermusicpittsburgh.org 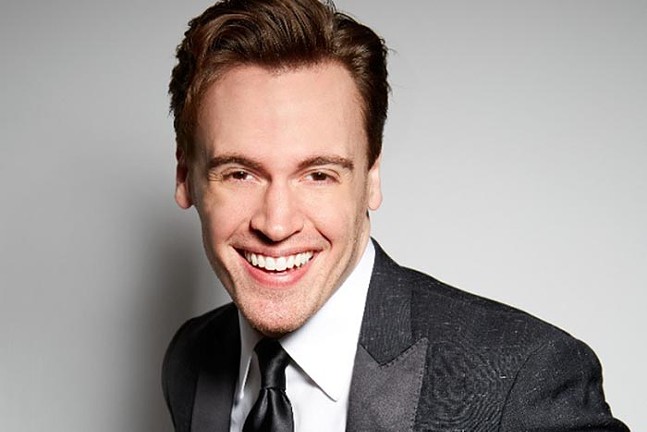 Photo: Courtesy of the Pittsburgh Cultural Trust
Erich Bergen at Greer Cabaret Theater
STAGE • IRL
Following a starring role on CBS’s Madam Secretary, Erich Bergen will make his concert debut in Pittsburgh at Greer Cabaret Theater. Bergen has a wide breadth of performing experience, including in the stage production of Jersey Boys and Clint Eastwood’s 2014 film adaptation. Bergen will perform a range of songs, starting with selections from the Great American Songbook, a canon of influential jazz and popular songs from the early 20th century, all the way up to today’s hits. 7 p.m. and 9:30 p.m. 655 Penn Ave., Downtown. $45-70. trustarts.org

STAGE • IRL
Seeking to redefine what a theater experience is, Live from the Edge comes to City Theatre. This unique performance charts the evolution of language by exploring everything from childhood rhymes to poetry, hip hop, gospel, theater, Latin jazz, and down-home blues. Enjoy a theater experience that defies what you have come to think of as traditional. Continues through Oct. 31. 1300 Bingham St.., South Side. $20-65. citytheatre.culturaldistrict.org

KIDS • VIRTUAL
One of the first women engineers, Bertha Lamme, will be a topic of discussion at the Heinz History Center this month for an interactive project for young kids. Hop into History: The Slide Rule Phenom, Bertha Lamme invites children ages 3-5 to “explore with people, places, and stories that make Pittsburgh unique.” It will also include a project focused around Lamme’s work. 10:30-11 a.m. Free with registration. Donations encouraged. heinzhistorycenter.org/events