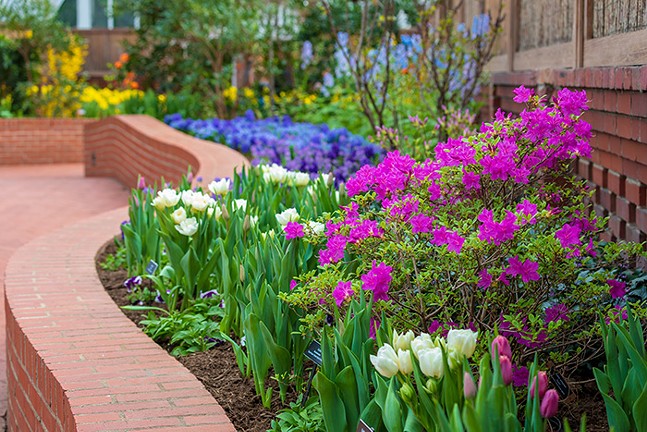 Photo: Phil Johnson II
Spring Flower Show: Canopy of Color at Phipps Conservatory and Botanical Gardens, see Mon., March 15 for more details
Thu., March 11
BIRDS • VIRTUAL
Learn how science and art complement each other with science writer and naturalist Rosemary Mosco during Cartoons for Conservation: An Evening with Bird and Moon Comics, part of the National Aviary’s Virtual Speaker Series. Mosco is the creator of the Bird and Moon Comics and Charts and Wild City Comics series, which use art to educate about ecology and environmental issues. She will share her professional journey of blending cartoons with science, as well as some of the funny creatures she’s met along the way. 7 p.m. $15. $13 for members. aviary.org

Fri., March 12
HOLIDAY • VIRTUAL
Beer, brown bread, balsamic vinegar made from Irish stout. That’s right, it’s time to celebrate all things Irish during the Shamrock Shindig with Good Taste Pittsburgh. The virtual event comes with tons of goodies — like the aforementioned treats and a customized beer glass from Pittsburgh City Paper (we’re sponsors!) — as well as Irish pastries and candies, not to mention a ticket to the Pittsburgh Irish Festival in September. The shindig also features lessons on how to bake Irish classics and pour proper pints, as well as music from the Whiskey Limericks and bagpiper Ryan Myett. Pick up kits at designated times before the event. 6:30 p.m. $45. goodtastepittsburgh.com

Photo: George Lange/Pittsburgh Symphony
Sat., March 13
MUSIC • VIRTUAL
Join the Pittsburgh Symphony Orchestra for Manfred Honeck Returns, a special night where musical director Honeck conducts the musicians for the first time in over a year. The orchestra will perform Mozart's "Serenade No. 6," and “Tchaikovsky's Souvenir de Florence," as well as other classics. Access to the virtual concert will be available through PSO's Front Row program, which provides performances from the orchestra while in-person shows remain suspended. 7:30 p.m. Available for one week. $15. pittsburghsymphony.org

Sun., March 14
ART • IRL
BoxHeart Gallery presents A Map & A Key, a show featuring the highly textured paintings and collage work of local artist Tony Cavalline. In his artist statement, Cavalline says he uses organic elements incorporated with “old and found materials such as maps, handwritten notes, and other ephemera.” BoxHeart describes A Map & A Key as recalling a “sensitive boy’s pure and desperate creation of mythology,” posting on its website that it “speaks to a quiet and insistent longing for magic amid the devastating loss that comes with growing up.” Continues through Fri., April 2. 4523 Liberty Ave., Bloomfield. Free. boxheartgallery.com

Mon., March 15
FLOWERS • IRL
In celebration of the coming spring, Phipps Conservatory and Botanical Gardens is hosting a spectacular new show featuring seasonal blooms. Spring Flower Show: Canopy of Color has tens of thousands of spring flowers including hyacinths, petunias, and more, either placed on beds or suspended in the air. Phipps is boasting rain curtains that “cast April showers in the Sunken Garden” and a motorized windmill in the South Conservatory. Timed tickets must be purchased in advance. One Schenley Park, Oakland. $11.95-19.95. phipps.conservatory.org

Tue., March 16
TALK • VIRTUAL
Fun fact: The oldest site of human habitation in North America is located just an hour from Pittsburgh! The Meadowcroft Rock Shelter & Historic Village is in Washington County, and thanks to the Remarkable Relics: Meadowcroft Rock Shelter, a new virtual event sponsored by several libraries in Allegheny and Washington counties, you don’t even have to leave your home to explore the ancient artifacts of the 19,000 year old shelter. 5-6 p.m. Free. facebook.com/whitehallpubliclibrary

FASHION • VIRTUAL
Did you know that the 19th century "plume bloom," an era when wild birds were hunted to make fancy hats out of their feathers, caused such damage to bird populations that some species nearly went extinct? Did you know that the movement against hunting sparked the creation of the National Audubon Society? Learn about all this and more during In Conversation: Murderous Millinery, a virtual event from the Frick Pittsburgh. 7 p.m. $10. thefrickpittsburgh.org 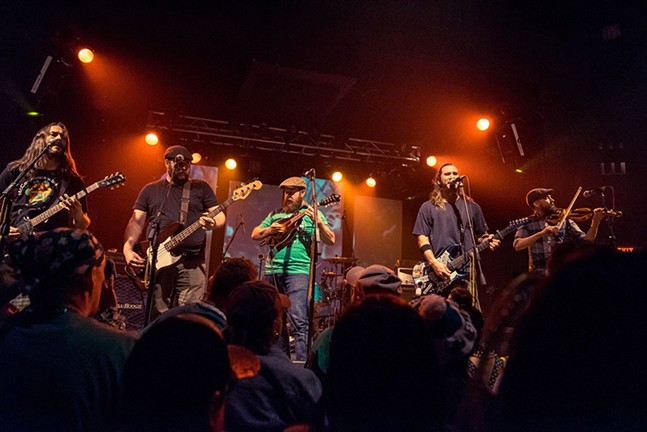 Photo: Benjamin Jaber
Bastard Bearded Irishmen
Wed., March 17
MUSIC • VIRTUAL
The Pittsburgh punk band Bastard Bearded Irishmen is synonymous in the city for its annual St. Patrick’s Day shenanigans, and the band isn’t letting COVID-19 stop them from celebrating again this year. Instead of an in-person concert, the band is hosting a Viral Variety Hour to have some fun and raise money for the Staff Covid Relief Fund of Rex Theater, a South Side music venue which closed in 2020 due to the effects of the pandemic. General admission ticket holders get access to the pre-recorded, hour-long event, featuring a mix of new and old performances from the Bastard Bearded gents (who will be watching the show live virtually along with their fans), plus some “fun surprise elements.” For an even more personal experience, VIP participants get a prepared “take and bake” meal from South Side’s Piper’s Pub (either Shepherd's pie or Corned beef and cabbage), a band merch package, and more. 8 p.m. $15-85. bastardbeardedirishmen.com