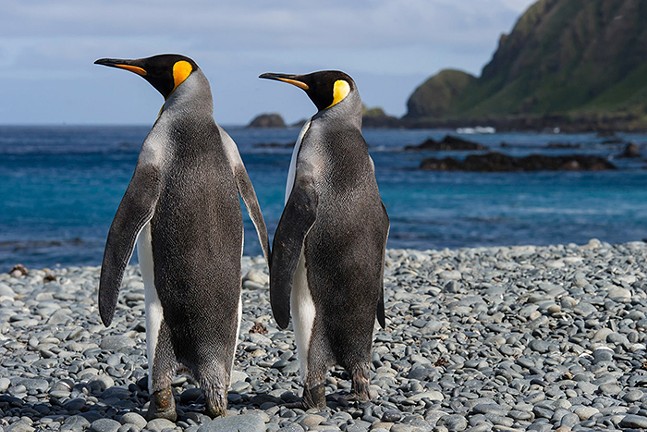 Fri., Feb. 19
COMEDY • VIRTUAL
In continuance of its Black History Month celebration, Arcade Comedy Theater brings us another night of Black-focused entertainment. For the next event in the series, they are hosting An American Roast, a game show where comedians take turns roasting figures and events of American history. This night features Deric Brown, Miles Miller, Christina McNeese, and more. The performance will take place on Arcade's YouTube channel. 9 p.m. Free. arcadecomedytheater.com

Sat., Feb. 20
TALK • VIRTUAL
There was a time when penguins dominated popular culture, from March of the Penguins to Happy Feet. While the tuxedoed birds have largely receded from the spotlight — unless, of course, you’re a Pittsburgh hockey fan — there's still plenty to learn and love about them, which you can do during Pittsburgh Zoo and PPG Aquarium's event Every Penguin in the World. Hear from researcher Charles Bergman, who has traveled the world to see and photograph every species of penguin. 1 p.m. $15-21. pittsburghzoo.org

ART • VIRTUAL
The blazing hot dumpster fire that was 2020 didn't dampen the spirits of Fun-A-Day Pittsburgh. The community art project still kicked off 2021 by doing what it does best, encouraging people to flex their creative muscles every day throughout the month of January. Now you can view what participating artists produced, which includes everything from music to hand-carved wooden spoons, by visiting the Virtual Art Show, up now through the end of February. Continues through Sun., Feb. 28. Free. funadaypgh.com/artshow2021

Sun., Feb. 21
FILM • VIRTUAL
February is Carnival season, so join City of Asylum for an installment of their film series Mout’ Open, Story Jump Out! Presented in partnership with the Sabira Cole Film Festival and the JouvayFest Collective, this installment will feature three short films that highlight and celebrate the history and culture of Carnival in the Carribean. The virtual screenings will be followed by a panel discussion entitled Global Caribbean Culture: Resistance and Spiritual Fusion. 6 p.m. Free. alphabetcity.org

Photo: Courtesy of Afua Bruce
Afua Bruce
Tue., Feb. 23
TALK • VIRTUAL
Throughout Black History Month, Carnegie Science Center is highlighting the "amazing and groundbreaking influences" of Black scientists. During a Facebook Live Career Connections Chat, guests will meet Afua Bruce, the Chief Program Officer at DataKind, a "global nonprofit that harnesses the power of data science and AI in the service of humanity." Bruce, who previously served as the Executive Director of the White House's National Science and Technology Council, has used technology to improve outcomes in criminal justice reform, immigration, and more. 7 p.m. Free. facebook.com/carnegiesciencecenter

Wed., Feb. 24
TALK • VIRTUAL
Spring is closer than you might think, and nothing signifies the start of the season like the return of migrating birds to Pittsburgh. And with that avian influx comes potential problems for our feathered friends. Learn more about how to keep local and migrating birds safe this spring with the panel discussion Spring Migration and the Safety of Our Local Birds. The virtual talk is hosted by the Frick Pittsburgh and includes an ornithologist, conservationist, and others. 7-8 p.m. Free with advanced registration. thefrickpittsburgh.org