Penguins on parade, an exhibit inspired by street art, a National Book Award-winning author, and more events this week in Pittsburgh 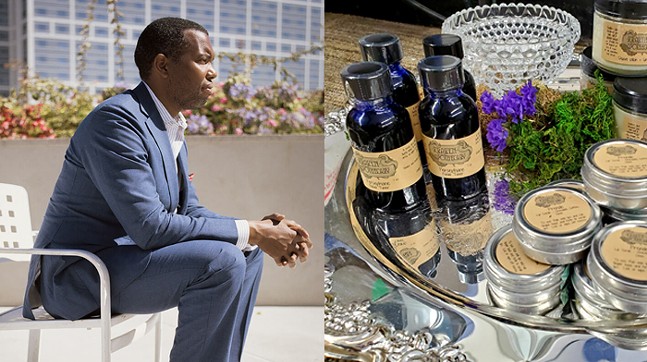 Fri., Dec. 4
ART • IRL
View the abstract and surreal work of painter Noah Emhurt's work at his exhibit Running Amuck, now showing at the Christine Frechard Gallery. "I try to keep things as chaotic as possible," says Emhurt while describing his own work, which is inspired by street and pop art. 12-6 p.m. Continues through Thu., Dec. 17. 5126 Butler St., Lawrenceville. Free. christinefrechardgallery.com

Sat., Dec. 5
ART • IRL
Artists Nicole Czapinski and Alex Ebstein take recycling to a new level with the opening reception of Extra Fiber, a new exhibition at CDCP Project Space. The show features a variety of works made from reused materials like yoga mats and pipe cleaners, and is described on the CDCP website as questioning “ideas of purpose and value, while delivering a subtle sense of humor.” 11 a.m.-6 p.m. Continues through Jan. 10, 2021. 317 S. Trenton Ave., Wilkinsburg. Free. Appointment only. caseydroege.com

MARKET • VIRTUAL
Join Maude's Paperwing Gallery for Craftivist 2020, a virtual version of their annual event celebrating the intersection of making art and giving back. The virtual event will showcase local artists, specifically ones from underrepresented communities, that will "allow shoppers the ability to find meaningful gifts for the activists in their lives." The event will take place on Facebook, with posts highlighting artists, as well as interviews, raffles, and more. 11 a.m.-7 p.m. Search "Craftivist 2020" on Facebook.

Sun., Dec. 6
ZOO • IRL
Human parades are pretty much canceled thanks to the pandemic, but our penguin friends at the Pittsburgh Zoo & PPG Aquarium are filling in. Every Saturday and Sunday in December, watch as our cold-weather pals waddle on the PPG Aquarium’s outdoor patio during Penguins on Parade. Zoo tickets must be purchased to view. 7370 Baker St., Highland Park. $15-17 admission. pittsburghzoo.org

Mon., Dec. 7
KIDS • IRL
We stare at screens all day, so change it up and feast your eyes on some freaking lasers instead. At the Carnegie Science Center Buhl Planetarium, audience members can take in the sights and sounds of the Holiday Magic laser shows with some of their favorite seasonal songs. 2:30 p.m. Continues through Jan. 1, 2021. 1 Allegheny Ave., North Side. $8 for first show, $5 for second show. carnegiesciencecenter.org

LIT • VIRTUAL
As part of Pittsburgh Arts and Lectures’ Ten Evening Series, join Ta-Nehisi Coates, the 2015 National Book Award–winning author of Between the World and Me, as he discusses his debut novel, The Water Dancer, with Pittsburgh’s Damon Young. Young is the author of the racially-charged collection of memoirs, What Doesn’t Kill You Makes You Blacker. Can’t make the virtual event on Monday? Ticket holders can watch the discussion digitally anytime for up to a week after the event. 7:30 p.m. $15. pittsburghlectures.org

Tue., Dec. 8
TALK • VIRTUAL
The Andy Warhol Museum will present Reflections on Warhol, a virtual talk between Pulitzer Prize-winning arts writer and playwright Hilton Als and the museum's Milton Fine Curator of Art, Jessica Beck. The discussion will cover Als' research and writing on Warhol, including his ongoing Andy Warhol: The Series, and his essays on Warhol’s relationship with late graffiti artist, Jean Michel-Basquiat. The talk is part of the museum's global digital initiative, Warhol Without Walls. 2 p.m. Streaming on Eventive. $5. warhol.org

Wed., Dec. 9
THEATER • VIRTUAL
The Point Park Conservatory Theatre Company takes a new approach to virtual theater with its rendition of the musical Ordinary Days. Set in New York, the show, which first premiered in 2008, follows four characters whose “ordinary lives end up connecting in the most unexpected ways,” according to a press release. The show will be digitally produced with two casts, and features some gender-swapped roles. Director Dave Solomon says audiences can experience both casts, which showcases the “incredible level of talent at Point Park.” The opening night includes a live talkback. 7:30 p.m. Continues through Sun., Dec. 13. $5-15. playhouse.pointpark.edu