"There [are] always more people calling for service than we have the ability to serve." 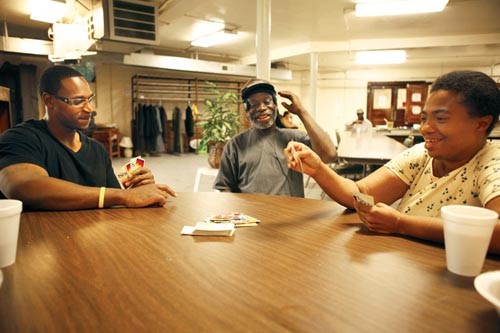 At one end of the basement of Friendship's Fourth Presbyterian Church, a man sleeps in an armchair next to the television, a white baseball cap pulled over his face.

Paul DeWalt, program director for the East End Cooperative Ministry, says the sleeping man likely stayed in one of the county's more than 400 emergency homeless shelter beds the night before.

About another dozen people have scattered themselves throughout the cool church basement. On this hot July Thursday afternoon, the room is serving as a homeless drop-in center -- a place for people with nowhere else to go to get inside, out of the heat.

DeWalt described it as a "slow day"; on hot days, 20 people or more may show up. But as the state continues to slash funding for homeless and other social-service programs, slow days may become rarer.

Programs like the drop-in center, which is funded through federal dollars and private donations, will likely see a new wave of homeless clients in the next few years. New, deep state spending cuts are putting more people at risk for homelessness and could force programs aimed to help them to shut their doors, even as more people each year seek help.

"There are a lot more people entering the homelessness system because we can't prevent them from entering," says Chuck Keenan, Allegheny County housing coordinator. "We're walking a real tight line and there [are] always more people calling for service than we have the ability to serve."

State funding for homeless assistance reached a 15-year low this year, and it's likely to go lower. In June, the legislature authorized Gary Alexander, the director of the Department of Public Welfare, to cut $400 million more from his agency's $10 billion budget.

Right now, homelessness assistance makes up just half of 1 percent of the agency's budget. But the new state budget already cuts funding for a variety of programs  --  behavioral health services, drug and alcohol programs, housing agencies and others -- that can help prevent people from ending up on the streets.

Barry Lee, a sociologist with Penn State University, says that those kinds of service reductions can put additional pressure on people who may already be in a tough spot.

"Those who receive some sort of financial assistance subsidy are likely to stay out of the homelessness system. The same thing is true for people that get other kinds of help," Lee says. "I don't think there's any question that [budget cuts] will hurt these agencies."

Many organizations are facing an ugly choice: Either keep services at their current levels and suffer a financial hit, or cut back to preserve the organization's balance sheet.

Caroline Woodward, the development director for Bethlehem Haven women's shelter, Downtown, says her organization has chosen to run a deficit rather than reduce services. Until this year, for example, the state gave about $90,000 to help the currently and formerly homeless get back into the workforce. Now, Woodward says that Bethlehem Haven covers the program itself, focusing its efforts on women in the shelter. To cover these and other costs, the center is drawing on money from a reserve fund.

"We're lucky that we have four months' operations in the bank," Woodward says. "Most organizations don't have that."

But Woodward is also trying to raise 30 percent more in private donations this year, and Bethlehem Haven is economizing wherever it can. Its phones are now staffed by volunteers, and the director does "light office-cleaning" to keep costs down, Woodward says. The program's directors all took a one-week unpaid furlough last year as well.

Other programs, meanwhile, have cut back on some services and reduced staff for others. Lenny Prewitt, the director of the non-profit Family Links, says state budget cuts required them to cut staff at their Downtown shelter from two full-time and one part-time staffers to just one on each shift.

"Where we would have a couple of staff on a shift to manage 18 homeless folks, now it's just one," he says. "The cuts make it more difficult to bring clients through our program, and address the individual needs of folks on a more consistent basis."

Individual attention is important, says Lee. Because while a bad economy puts people at risk of homelessness, every homeless person has unique challenges: losing a job, having a medical emergency, serving jail time, etc. Social workers can't treat homeless people as a homogeneous group, Lee says; they need to deal with each person's problems. Cutting back on staff makes it harder to do so.

Meanwhile, the need continues to rise. According to the Allegheny County Department of Human Services, the county's current homeless count is slightly more than 1,000 people -- roughly 200 more than were in the county five years ago.

The county -- which in 2006 began a 10-year-long initiative to end homelessness -- has made some progress. More than 400 homeless people now live in 60-day-limit emergency shelters rather than strictly on the street.

Various programs throughout the county, meanwhile, have formed a Homeless Advisory Board to try to link up services and fill in gaps for different people. Overseeing the effort, county housing coordinator Keenan says the group has made progress toward one goal -- funding for 1,000 new permanent housing units for the homeless.

Just last month the county received funding for 200 units, adding to the 600 already in place. Most of the funding will go toward rental subsidies in existing housing, rather than building new facilities, he said.

But when government agencies and nonprofits have to slash services, Lee warns, it jeopardizes any gains they've made.

"All bets are off as these agencies and service-providers that are addressing the problem have to cut back," he says. "We've made modest [inroads] in the effort to reduce homelessness, but they're in jeopardy now, that's for sure."

At a small desk, about two dozen feet from the television at the Fourth Presbyterian Church, case manager Morgan Kraybill talks with a young man and helps him fill out paperwork. She's one of two caseworkers who staff the center, which can see up to two dozen people at a time.

"We get people who have fallen between the cracks," she says.

The center, like many in the county, doesn't provide all of the necessary services in-house. Kraybill will often refer people to one of the more than 100 other county programs for their various needs.

Anthony Love, deputy director of the Interagency Council on Homelessness, says that getting people off the street is the first priority. Most social services focus on a "housing first" mentality. Love says the main goal is to get them "out of the chaos of homelessness" right away, and then start to address clients' problems.

DeWalt says that those thought of as "traditional homeless" -- ragged clothes, poor hygiene, medical problems, severe mental or physical disabilities -- make up only about 8 percent of the population, but use 30 percent or more of the services. They may end up in jail, in emergency rooms or in the hospital, all at taxpayer expense. They may have been homeless for years, and often don't have much hope of getting housed or keeping a job.

They might simply live on the street, or go into one of the county's three dozen "Safe Haven" beds -- meant for just the chronically homeless -- that focuses on getting people off the street and into professional help. Federal funding keeps those doors open: Should that drop off, those men and women would find themselves out of a place to sleep, again.

DeWalt and others say the system isn't perfect, but the programs in place have made a difference. With budgets slashed and programs cut, however, some people are likely to regress instead of continually move forward.

Back at the Fourth Presbyterian church drop-in shelter, for instance, DeWalt points out a man wearing a white button-down dress shirt and brown cap, sitting quietly at a table.

"He was dealing with a substance-abuse problem and kept going in and out of the hospital," DeWalt explained. "It's definitely helped stabilize him. Since he's come into the program, he hasn't gone to the emergency room once."