Senyai Thai Kitchen, in Shadyside, offers some new dishes in a well-designed space

Among the worthy dishes: golden mushroom and crab curry 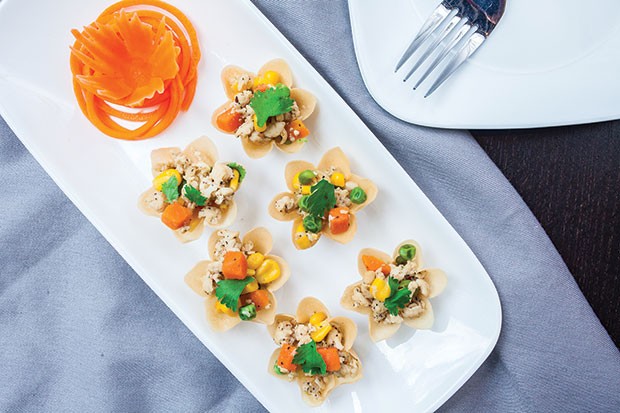 In the decades we’ve been dining out in Pittsburgh, our fair city has gone from having one Thai restaurant to an exciting variety. There is a place serving Thai food for every occasion, budget and palate, from simple to swank, and offering fare to those seeking the familiar to those who are more culinarily adventurous.

Senyai Thai Kitchen, the latest, is the first in a long time to redefine the experience — aesthetically, at least. All-white walls and furnishings create a serene, almost spa-like backdrop. Pops of jewel-tone color are provided by a bouquet of silk pillows and fresh flowers on the tabletops. Of note is the wall art, consisting of views of Thailand silkscreened onto metal panels, a treatment that takes them out of the realm of tourist photography to suggest dreamlike reflections on the country’s iconic temples and landscapes.

Most extraordinary of all is a ceiling that uses computer-cut plywood fins to create a fascinating pattern of criss-crossing panels and vaults. Designed by Carnegie Mellon University architecture professor Dana Cupková and Gretchen Craig, Senyai’s ceiling elevates the otherwise spare space (the onetime Fajita Grill on Ellsworth Avenue) into someplace artfully special.

What sort of food is served in this remarkable room? Mostly, it is a typical Thai menu. A few dishes struck us as unfamiliar, but overall, we hoped the kitchen would distinguish itself through execution, not novelty.

A good start was larb, that substantial but refreshing salad of pork or chicken over greens and plenty of herbs, spiced by ground chili and textured by ground roasted rice. Senyai’s larb used minced, not ground, pork, and we appreciated the improved texture that resulted. Red onion, scallion, cilantro and mint created a flavorful and varied bed, but the ground rice — whose toasty flavor as well as crunchy texture are so characteristic of larb — was scarcely in evidence.

Chicken satay was flawless, tender and moist and basted with herbs and spices. Still, the standout starter was golden mushroom. A cluster of enoki mushrooms fried, tempura-like, in a light, fluffy batter, became a sort of crown of crisp, faintly chewy tendrils. They were equally satisfying plain and dipped in a sweet chili sauce surfaced with ground peanuts.

Pad Thai, a staple of American Thai restaurants, is actually less a traditional Thai dish than a relatively recent innovation. It’s milder than much Thai cuisine, but what has elevated it to the status of national noodle is its enchanting blend of sweet, salty and tangy notes, together with the faintest suggestion of spice. We weren’t sure what to make of Senyai’s pad Thai. Unlike bad pad Thai, it wasn’t overbalanced toward the sweet, but its flavor composition seemed rather light on the savory umami side. Ultimately, the pad Thai was tasty, but short of truly satisfying. The rice noodles were also on the soft side, clinging together in masses that resisted mixing with the crunchy bean sprouts.

Another noodle dish, pad prik king, sold us with its promise of spicy lemongrass sauce, and it delivered. It wasn’t punishingly hot. Senyai has joined the welcome trend of replacing the old 1-to-10 heat scale with a simple zero-to-3, and we found a level 2 suited us well. But we kept the rice bowl handy. Alongside tender pork were crisp green beans, carrots and bell peppers, and if the overall effect was faintly evocative of Chinese-American stir-fries, the lemongrass held our palates unmistakably, and deliciously, in Southeast Asia.

Angelique loves curries. Her favorites are green and Panang, and while both were on offer here — it’s the rare Thai restaurant that doesn’t include them — Senyai’s menu enticed her to try something new. Crab curry contained just two main ingredients, jumbo lump meat and kale, in a creamy yellow curry. The flavor was mild yet focused, the crab succulent, and the kale tamed and tenderized by its coconut curry bath. Is kale an authentic Thai ingredient, or an innovation of an American restaurant in the time of trendy superfoods? No matter; this curry is a dish you won’t find anywhere else, another reason to go — and return — to Senyai.

Senyai’s service, food and interior design add up to a distinctive dining experience. Its light, bright interior and modern menu of Thai standards, plus a few salutary surprises, make it a worthy destination on Ellsworth Avenue’s quirky cultural corridor.