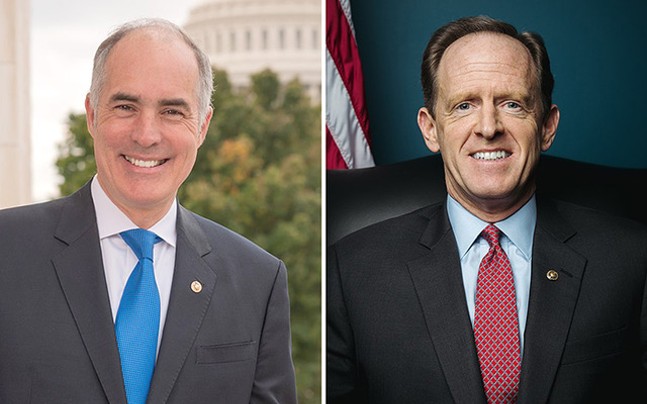 Bob Casey and Pat Toomey
Last week, Pennsylvania's U.S. senators took matters into their own hands and released a list of nursing homes are known to underperform on quality standards. Both U.S. Senators Bob Casey (D-Scranton) and Pat Toomey (R-Lehigh) released the list after the federal agency that oversees it balked.

Now, the agency says it will make that information public going forward.

The Centers for Medicare and Medicaid Services (CMS) said on June 5 that it will plan to make public a list of candidates for the Special Focus Facilities (SFF) initiative, a program that provides federal funding to improve nursing homes with a pattern of poor care. Eighty-eight facilities at a time are chosen to participate in the SFF program from a list of 440 candidates. While the SFFs’ names are publicly available, the list of candidates has not, in the past, been made public.

The agency’s announcement comes after Casey and Toomey released a version of the list on June 3 in the name of greater transparency, saying individuals and families should have as much information as possible when choosing a nursing home.

Casey and Toomey had written to CMS in March, requesting information about the agency’s investigation into neglect and abuse in nursing homes. In response, they received the list of candidates and a letter from CMS administrator Seema Verma saying the agency was “evaluating” its authority to release the list.


WASHINGTON (@AP) — The government says it'll start posting a list of some 400 troubled nursing homes, in a turnabout days after @senbobcasey and @sentoomey publicly released the "secret" document, along with a report questioning oversight of poor-quality facilities.

The complete list, which can be read here, includes candidates for the SFF program and the facilities that were chosen to participate. Twenty Pennsylvania facilities made the list of more than 400 nursing homes, including local facilities Brighton Rehabilitation and Wellness Center in Beaver County and The Grove at Latrobe in Westmoreland County.

“Across Pennsylvania, and the Nation, most nursing homes serve their residents well and treat them with dignity and kindness,” said Casey in a press release. “It is outrageous that we continue to hear stories of abuse and neglect in nursing homes that do not live up to these high standards.”

The list released by the senators reflects information collected as recently as April 2019. CMS updates the list each month based on new findings.

Toomey said Monday that he hopes that CMS will choose to disclose “all relevant information” about nursing home performances.

“When a family makes the hard decision to seek nursing home services for a loved one, they deserve to know if a facility under consideration suffers from systemic shortcomings,” Toomey said in a press release.

CMS did not offer information in its Wednesday announcement as to when or how often it will release the list of SFF candidates.

SFF participants are expected to improve and “graduate” from the program in 12-18 months. Facilities that don’t improve are terminated from participating in Medicare and Medicaid.

Verma also noted in her letter that while the list of SFF candidates was not public at that time, the CMS runs a Nursing Home Compare database which provides information and star ratings for more than 15,000 nursing home facilities across the country. SFF candidates generally have a low star rating in this database, she said.