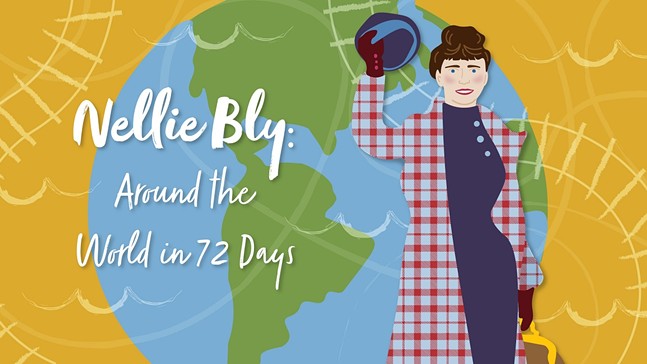 Today, the History Center launched an interactive program inspired by pioneering journalist and western Pennsylvania native, Nellie Bly. Nellie Bly: Around the World will use social media, including its Twitter account, and blog posts to follow, in real-time, Bly's historic 25,000-mile journey around the globe.

A press release promises that, for each post, History Center curators and researchers will incorporate “archival information, images, and Bly’s first-hand accounts that document her challenges, triumphs, and the colorful characters she met along the way.”

The latest offering commemorates the 131st anniversary of Bly's journey, which started on Nov. 14, 1889. It's also part of the History Center’s Women Forging the Way initiative, a year-long celebration of the 100th anniversary of women winning the right to vote in the U.S.

Bly has also been honored by the Pittsburgh International Airport, which installed a statue of her in March.

Born Elizabeth Jane Cochran on May 5, 1864 in Cochran’s Mills, a small town located about 30 miles northeast of Pittsburgh, Bly started a career in journalism writing for publications like the Pittsburgh Dispatch and New York World. She rose to fame for her in-depth, investigative reporting, such as going undercover to document the shocking treatment of patients at Blackwell's Island Insane Asylum.

However, she's best known for her 1889 journey, in which she challenged herself to beat the time it took Phileas Fogg, the protagonist of the Jules Verne book Around the World in Eighty Days, to make his world tour. She beat out Fogg by making the trip in 72 days, returning on Jan. 25, 1890.

Nellie Bly: Around the World online activities are free and open to the public. The program continues through January 2021.