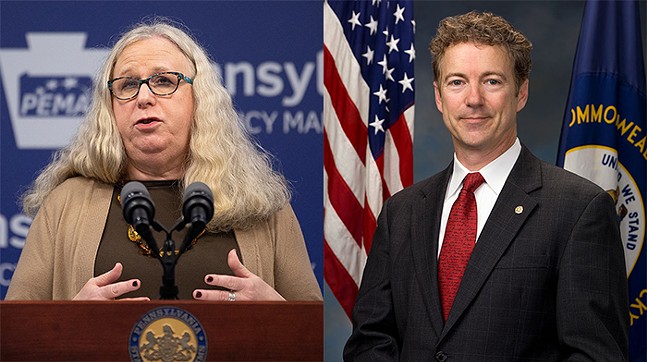 Then he asked Levine if minors are capable of making the decision to transition.

Later on, Paul asked Levine, as part of one question, whether she supports the “government intervening to override the parents consent to give a child puberty blockers, cross-sex hormones and/or amputation surgery of breasts and genitalia?”

Levine, if confirmed, would be the first openly trans person confirmed by the Senate to a presidential cabinet position. She calmly answered both questions the same and said that “transgender medicine is a very complex and nuanced field,” and said she would be pleased to come to Paul’s office to talk to him and his staff about trans health care issues.

Footage of the questioning was quickly picked up by right-wing media, and then was shared thousands of times. Paul himself posted the video on YouTube and then shared it on his social media pages.

The incident comes on the heels of another controversy involving U.S. Rep. and QAnon supporter Marjorie Taylor Greene (R-Georgia), who put up a poster outside of her office reading “There are TWO genders: Male and Female.” Greene’s office is across the hallway from a U.S. Rep. Marie Newman (D-Illinois), who has a transgender daughter. These incidents also come as Congress has reintroduced the Equality Act, which would add LGBTQ people to the county’s Civil Rights Act, and would provide nondiscrimination protections to LGBTQ Americans.

Democrats and LGBTQ advocates quickly called out Paul for his line of questioning.


Anyone who wants to learn about the compassionate, thoughtful support available to gender expansive and gender dysphoric children and their families should check out this informative guide.https://t.co/hvCRg0s6mx

According to the LGBTQ advocacy group the Human Rights Campaign, treating gender dysphoria in children does not involve medical interventions.

“It is important to understand that, for children who have not reached puberty, gender transition involves no medical interventions at all: it consists of social changes like name, pronoun and gender expression,” reads the HRC 2016 guide for supporting transgender children.

At one point during his questioning, Paul brings up how England, an entirely different country with different laws, is handling gender dysphoria decisions, and then says "We should be outraged that someone is talking to a three-year-old about changing their sex!"

Charlotte Clymer of the pro-LGTBQ religious organization Catholics for Choice tweeted that “There are no young trans children taking hormones or receiving medical intervention. This is not a thing. It is a myth that has been repeatedly debunked.”

1. There are no young trans children taking hormones or receiving medical intervention. This is not a thing. It is a myth that has been repeatedly debunked.

State Rep. Malcolm Kenyatta (D-Philadelphia), who is openly gay and is running for U.S. Senate, asked his followers to not share the video and to support LGBTQ organizations like Victory Fund instead.

The official account of the Pennsylvania House Democrats called Paul’s questioning of Levine an attack. Levine has already been subjected to a litany of transphobic attacks while she was serving in Gov. Tom Wolf’s state cabinet. In 2020, a Trump legal adviser purposely misgendered her. The attacks became so common that Wolf made a statement last year calling for "relentless series of vile slurs" to stop.