Nine Pittsburgh-area manufacturers have been harmed financially and are looking for tariff exemptions. 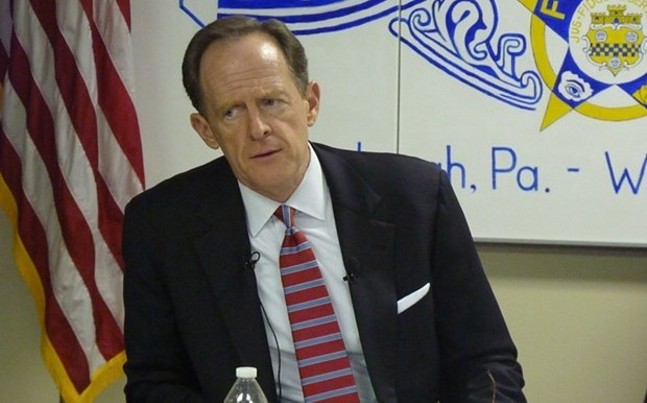 CP Photo: Ryan Deto
Pat Toomey
As a presidential candidate, Donald Trump declared to Pittsburghers that steel was coming back. Now as president, his tariff policies may be hurting companies that work with steel.

According to a list compiled by Sen. Pat Toomey (R-Lehigh), the Pittsburgh area has nine manufacturers that are being harmed by Trump’s tariffs on steel and aluminium.

In a letter sent to Trump’s Secretary of Commerce, Wilbur Ross, Toomey writes that tariffs have done significant damage to Pennsylvanians.

“The decision to impose taxes under the false pretext of national security has significantly diminished the ability of domestic manufacturers to provide affordable finished products to American consumers,” writes Toomey. The senator has backed most of Trump's policies. This letter marks one of his first and strongest criticisms of the president.

Toomey cites a steel-fabrication facility, NLMK, has paid more than $700,000 every day to comply with the tariffs.

“[Shell] cannot import the required steel products due to the section 232 quotas,” wrote Toomey. “If this situation is not addressed in a timely manner, Shell may delay its constructions plans and lay off hundreds of worker in the construction industry.”

Furthermore, the cracker plant is supposed to provide a boost to the region’s fracking industry, since the facility will process natural gas to create 1.6 billion tons of plastics per year. (Trump claimed to be a champion of the fracking industry while campaigning in Pittsburgh in 2016.)

Toomey, long a proponent of free trade, is urging the White House to provide exemptions to these Pennsylvania businesses. Toomey’s letter says that only about 12 percent of the companies seeking exceptions have received them. Toomey wants the commerce department to pick up the pace.

Trump took to Twitter today, scoffing at any idea that is tariffs are hurting the economy.

“I smile at Senators and others talking about how good free trade is for the U.S.,” tweeted Trump. “What they don’t say is that we lose Jobs and over 800 Billion Dollars a year on really dumb Trade Deals....and these same countries Tariff us to death. These lawmakers are just fine with this!”