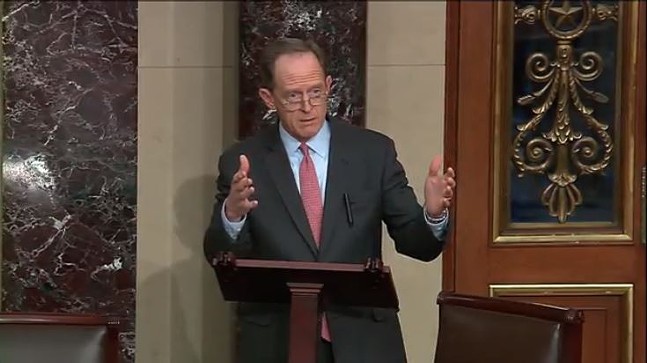 The inclusion of paid family leave was praised by Democrats, who have been attempting to pass legislation for years that would require paid time off for new parents. The U.S. is one of the only wealthy nations in the world to not offer mandated paid family leave for its citizens.

But a technicality in the bill excluded about 100,000 federal employees, mostly workers with the Federal Aviation Administration and the Transportation Security Administration, from the paid parental leave. When Sen. Brian Schatz (D-Hawaii) tried to address this technicality and amend the bill to include these federal workers, Pennsylvania Sen. Pat Toomey (R-Lehigh) objected.

Since the amendment needed unanimous consent to be included, Toomey’s objection effectively blocked the change and meant it couldn't come up for an immediate fix.


Congress passed legislation this week to provide paid family leave to all federal employees, but it needs a technical fix so it doesn’t leave out over 100,000 employees—including at FAA & TSA@SenBrianSchatz demanded we pass a bill to fix it

But Republican @SenToomey blocked it pic.twitter.com/wGcZkJLQJG

Toomey’s office shared the entire video of the exchange between Toomey and Schatz with Pittsburgh City Paper, and his office said the senator doesn't object to providing paid parental leave to the excluded employees. The video also shows Toomey didn’t object outright to the paid parental leave policy, but that he was asking for the technical fix needed to include those workers to be combined with a technical fix he is seeking to the tax cut bill of 2017.

He said the fix would “restore the ability to those who make leasehold improvements to fully expense those at the time they occur” and would allow retail business owners who make capital improvements to their stores or restaurants to deduct the cost of those improvements fully from their taxes.

“This is a huge problem,” said Toomey on Dec. 19. “This category of business investment has actually declined over the last year. That is not good for any of us.”

Toomey introduced a bill to address this issue in March. It has garnered bipartisan support and has a total 59 co-sponsors, including 12 Democrats, and the Congressional Budget Office has said the bill will have no impact on the budget deficit. He said attempts over the years to stop this fix have come from congressional Democrats, who he said are requesting $50 billion in Democratic priorities in order to agree to support the bill.

Toomey then proposed his own unanimous consent that combined the parental leave technical fix and his proposal to amend the tax cut bill.

Schatz objected to this combined proposal and said the two technical fixes shouldn’t be compared because the recent National Defense Authorization Act was passed with broad bipartisan support, while the 2017 tax cuts were passed only with Republican support.

“What the senator from Pennsylvania is saying, 'If I don’t get my thing, then these people don’t get the help they need,’” said Schatz. “This is a relatively small technical fix and he wants to trade it for a massive technical fix that is now two years old.”

President Donald Trump signed the National Defense Authorization Act on Dec 20. In addition to FAA and TSA workers, employees in the Washington, D.C. courts, public defenders, presidential appointees, and Article I judges were excluded from the paid parental leave policy.

Phil Glover is the national vice president for American Federation of Government Employees District 3, which covers Pennsylvania and Delaware. He says the country’s TSA workers deserve the same benefits that all federal employees receive.

There are 450 TSA workers in Pennsylvania, and 130 work at the Pittsburgh International Airport.

“Our TSA workers, who keep the flying public safe each day, deserve the same benefits as all federal employees,” says Glover. “Senator Toomey blocking the correcting of a mistake in legislation providing paid parental leave for thousands of TSA workers shows his disregard for these important safety officers.”

Glover is asking that Toomey apologize for his objection.

Toomey voted for the National Defense Authorization Act and issued a statement earlier this month about why he supported it, but he didn’t mention anything about paid parental leave.