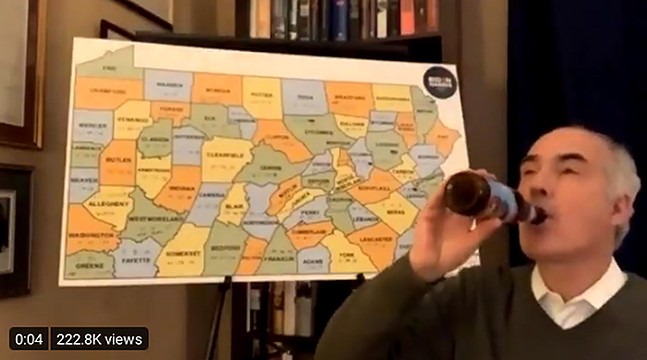 Screenshot taken from Twitter
Bob Casey drinking a Victory Brewing Hop Devil IPA
Today, the election results were officially certified in Pennsylvania, declaring (yet again) that President-elect Joe Biden had won the Keystone State. Biden secured a majority of the vote at 50.01% and won Pennsylvania by more than 80,000 votes. (President Donald Trump won Pa. by about 44,000 in 2016.)

U.S. Sen. Bob Casey (D-Scranton) has long been known for his election breakdowns and his beloved 67-county Pennsylvania map. And today, he upped his celebration game by cracking a Pennsylvania-brewed beer and taking a swig … at 11 a.m.

According to those close to Casey on Twitter, the beer is a Hop Devil IPA from Victory Brewing, which is based in Chester County. It clocks in at 6.7% ABV, which is quite the brew for a pre-noon drink. But Pennsylvanians were proud of Casey for not only enjoying beer made in the commonwealth, but also for braving a hoppy and powerful IPA in the morning.

Casey posted a video drinking the beer, and just like most sips of IPA, he follows up with a satisfying grimace.


When you drink an IPA before noon pic.twitter.com/CIeetRlAIp

The Democratic Senator’s tweet has quickly gone viral, and initially most Pennsylvanians were interested in knowing what kind of beer he chose, hoping it was a Pa.-made brew. (This is Pennsylvania, and we are fiercely loyal to our local makers.) The bottle, which was turned to the side, was difficult to determine.

Many incorrectly assumed, including Pittsburgh City Paper initially, it was a Golden Monkey Belgian-Style Tripel. That is even stronger at 9.5% ABV, but much sweeter than an IPA.

Either way, Casey’s choice of a Hop Devil IPA should serve as a reminder for the upcoming Thanksgiving holiday. Firstly, drink your beer at home and avoid gathering in bars and restaurants since coronavirus cases are currently at an all-time high in Pennsylvania. Secondly, there is no shame in drinking a morning beer when you are in a good mood.