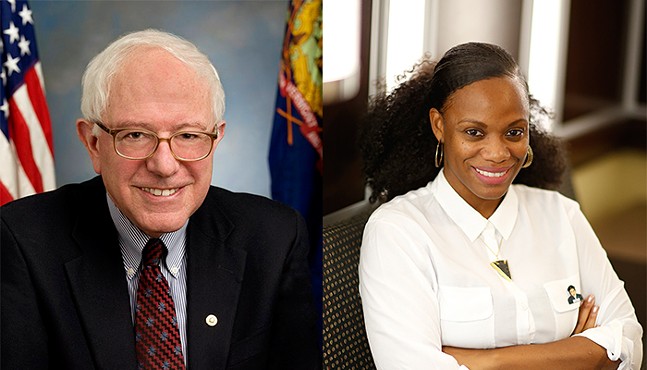 Bernie Sanders and Summer Lee
Since entering office in 2019, state Rep. Summer Lee (D-Swissvale) has been one of the loudest and most unapologetic progressive voices in Harrisburg. Her strong opposition to natural gas drilling, aka fracking, may have even led to a primary challenger against her in the form of Chris Roland (D-Braddock Hills), who is pro-fracking and backed up other pro-fracking Democrats like Allegheny County Executive Rich Fitzgerald.

In a statement, Sanders said that Lee “is workers' rights, environmental justice, and social justice.” He praised her support of Medicare for All, the Green New Deal, and a $15 an hour minimum wage. Lee is the first Black woman from Western Pennsylvania to hold a Pennsylvania state legislative seat.

“She is an important voice for our movement in Pennsylvania,” said Sanders. “Right now she is facing a tough primary and needs our support.”

Sanders has one of the largest email lists of any politicians in the U.S. and has been extremely successful in raising large amounts of money from thousands of small-dollar donations.

Lee has also garnered endorsements from the Conservation Voters of Pennsylvania, the Working Families Party, the Young Democrats of Allegheny County, and unions such as SEIU 32 BJ, United Electrical, and the Pittsburgh Federation of Teachers.

Roland has been endorsed by local trades unions, as well as received a somewhat controversial endorsement from the Allegheny County Democratic Committee.