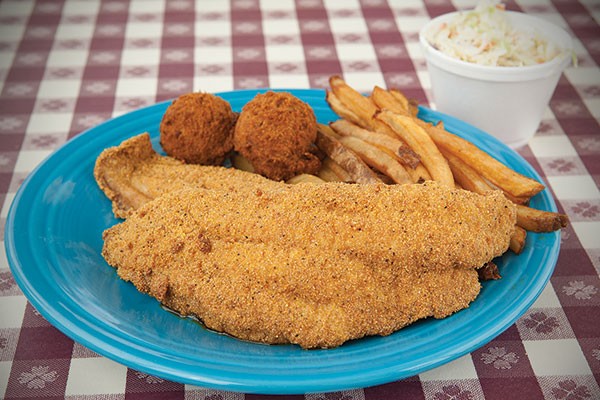 Located in what appears to be an old drive-in burger stand near the former airport entrance in Moon, Selma's Texas Barbecue represents a bit of a culture clash. The setting and the decor — heavy on family pictures and Texas kitsch — suggest humble, down-home goodness. But the ingredients and preparation seem tailored to appeal to today's discerning foodies, with everything from lemonade to tartar sauce and baked beans made in-house.

Most enticing of all, each meat is treated with its own custom rub and dry-smoked for hours, then served unsauced so that diners can choose from the six different styles on offer. The latter has become a bit of a trend (and a welcome one), but Selma's takes almost a sommelier's approach, explaining the ingredients and character of the sauces and suggesting meat pairings for each.

One downside of Selma's approach is that, with all of the meat and many of the sides slow-cooked in advance, they can run out. Indeed, there are signs proclaiming "First Come, First Served," and we regretted being too late to try chicken with Alabama white sauce, an improbably delicious, mayonnaise-based concoction that we've made at home but never seen at any restaurant. But with ribs, pork, brisket, turkey and catfish still on offer, there was little chance we would go hungry.

First, a general judgment: While everything we tried was moist and extraordinarily tender, smoke flavor was understated in most of the meats. Whether this was by design or miscalculation, the result was that, unlike the best barbecue we've eaten in Texas, sauce was more or less necessary to amp up the flavors of the naked meats. This included, alas, the brisket, which, when done perfectly, should need no accompaniment at all. On the other hand, the turkey breast was probably the best we've ever had, prepared by any method. The thick-sliced, mild white meat was suffused with subtle smokiness, and the flesh was extremely moist without a hint of mushiness.

We thought that all but one of the sauces were good examples of their types, from peppery Texas Cowboy to sweet, but not cloying, Kansas City. Both versions of Memphis — hot and original — provided a good middle ground of balanced sweet-spicy-tart notes. Carolina Pig-Pickin', consisting mostly of chili-pepper flakes in vinegar, should have been the perfect medium for pulled pork, but it was watery and bland. Jason's theory was that it needed to be applied to meat right off the grill, when it's primed to absorb liquid as the juices move through the muscle. Regardless, we quickly moved on to others, determining that, for our tart-leaning tastes, Carolina mustard was the best. Selma's version was well balanced, with plenty of yellow-mustard kick, enhanced by vinegar and onions and tempered by a little sweetness from honey, sugar or both.

One thing we never knew before we visited Texas was just how ubiquitous smoked sausage is. Thanks to a large German population (chicken-fried steak is really just an American version of wienerschnitzel), sausages became an inevitable partner to brisket on the grill, with results far different from hot-grilled fresh sausage or from smoked sausage finished over coals. Smoked sausage meat becomes dense yet juicy, and the smoke, surrounding the link from all sides, enhances the spices provided by the sausage-maker. Selma's describes its sausages as hot Italian, but they either have an extraordinary purveyor or their smoke works magic on any sausage, because this was a far cry from a tailgater's scarlet red, one-note bun-filler. It was more than worthy of what we tasted in Texas.

Selma's (carefully sourced) catfish, though not barbecue per se, is not to be missed. With a crunchy cornmeal coating surrounding succulent, flaky fish, this was the one "meat" that didn't need any enhancement with sauce. Selma's sides were great, too, especially the creamy mac-and-cheese and firm baked beans. Cooked collard greens were bland on their own, but responded nicely to a dollop of Carolina mustard sauce stirred in.

At Selma's, the better meats are as good as they get, the excellent sauces provide choices for every diner, and the sides transcend the perfunctory. If you're headed out to the airport but don't feel like getting on a plane to the Lone Star State, you can still get pretty good Texas barbecue at Selma's.