This is a more human King, far removed from the man whose monument now stands in Washington, D.C.

Selma opens with a well-known event. It's 1964 and Martin Luther King Jr. is in Oslo to accept the Nobel Peace Prize. In a scene between King and Coretta Scott King, we're shown a man out of his element.

"It doesn't feel right," says King (David Oyelowo), fumbling with an ascot his wife has told him to wear.

That's part of what makes director Ava DuVernay's drama different from other King biopics. Here we see a more human King, far removed from the man whose monument now stands in Washington, D.C.

The film picks up after President Lyndon Johnson (Tom Wilkinson) has signed the Civil Rights Act of 1964. Despite that victory, African-Americans in the South are still being denied the right to vote. So King and members of the Southern Christian Leadership Conference head to Selma, Ala., where the Student Nonviolent Coordinating Committee is working to register voters.

King's presence is unwelcome from the start. His group's demonstrations are met with brutality by the local police, whose actions are condoned and even sanctioned by Alabama's governor. 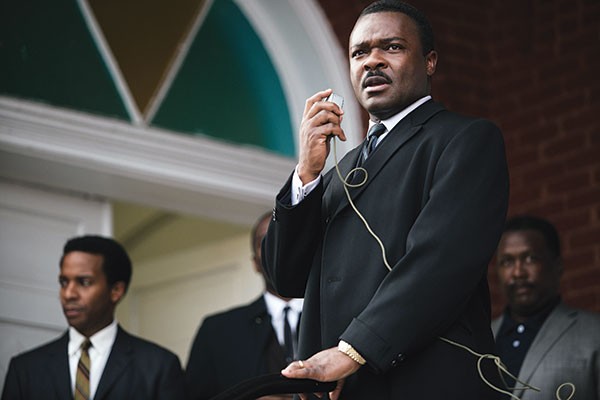 In a sense, the police are playing into King's hands. Media film the violence and share it with the rest of the country. That earns more support for voting rights throughout the nation.

Selma shows King battling on multiple fronts. In meetings with Johnson, he tries to persuade the president not to delay on national voting legislation. In Selma, he must weigh the importance of his cause against the violence inflicted on protesters. And through it all, the FBI works to assassinate his character and create a rift between King and his wife (Carmen Ejogo).

This film doesn't skim over the ugly elements of King's life. In a fight between King and his wife, they're forced to come confront his infidelity. The at-times adversarial relationship between King and Malcolm X is explored. And King even finds himself criticized by the SCLC and SNCC.

Viewers expecting a typical story that treats civil-rights leaders as infallible heroes and racism as a thing of the past will be surprised.

It's impossible not to see similarities between Selma and current events. Scenes of police brutality are all the more disturbing because they continue. And media's role during the civil-rights movement echoes the power of social media today.

And if there's any doubt about such parallels, the film's end-credits song references Ferguson, Mo.