The special election to replace Patrick Dowd has become a dizzying blend of old and new. 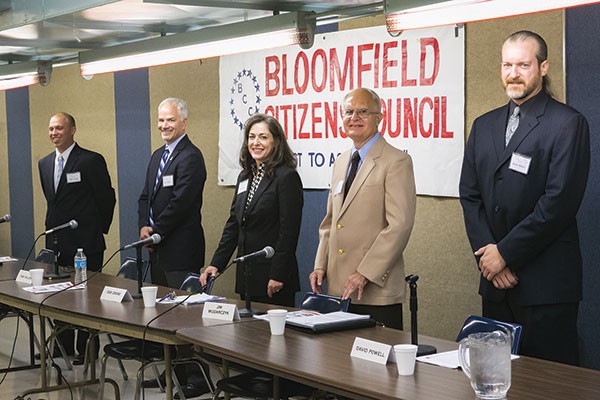 Maybe more than any part of Pittsburgh, City Council District 7 contains both relics of the region's industrial past and signposts for its future. Lawrenceville's steel-era sheds have been given over to robotic engineers, while Bloomfield's historic "Little Italy" bristles with non-Italian restaurants. The Strip District, long Pittsburgh's open-air market, faces a potentially huge development project, while even bedroom communities like Highland Park and Morningside are perking up.

No surprise, then, that the special election to replace Patrick Dowd has also become a dizzying blend of old and new. Much has changed since Dowd first won office in 2007 — and even since he resigned to head a new nonprofit, Allies for Children, in June.

Six years ago, Bill Peduto was striving to dismantle a "Democratic machine"; today, he is poised to become the city's next mayor. What's more, Peduto's choice to replace Dowd, Highland Park consultant Deb Gross, has what neither Peduto nor Dowd ever got: the Democratic Party endorsement. And suddenly, it's Lawrenceville's Tony Ceoffe who claims to be taking on the political machine — even though Ceoffe had the party's endorsement when he challenged Dowd in 2011.

Gross and Ceoffe aren't the only candidates in the running. The five-person field also includes:

• Tom Fallon, a former staffer for former City Councilor and state Sen. Jim Ferlo. Fallon now runs a business rehabilitating blighted homes, while remaining active in local civic groups. Fallon, of Lawrenceville, notes that because this is a special election, the winner will take office this year: "We will have to go in and judge [the city's proposed 2014] budget right away." The only candidate with government experience, Fallon also touts a willingness to work with Peduto.

• Dave Powell, of Morningside, a Libertarian who supports a land-value tax, which would be levied against the value of the parcel of property, rather than the structures built upon it. (Such a tax, he contends, will discourage land speculation and encourage investment.) Powell also pledges not to vote for any ordinance that would further the "war on drugs."

• Jim Wudarczyk, a Lawrenceville neighborhood historian who works for a packaging company, bills himself as business-minded and socially conservative. Alone among the candidates, he expressed a strong preference for hiring the city's next police chief from within the current bureau's ranks; while other candidates supported a nationwide search, "We don't need to spend a fortune in taxpayers' money," Wudarczyk said at a Sept. 26 forum.

But Gross, a Highland Park consultant with a background in the arts, is the Democratic nominee and the frontrunner. And Ceoffe has been her sharpest critic.

Oddly, when Gross and Ceoffe talk about any issue except each other, it can be difficult to discern a difference between them. Both boast of years of civic involvement: Gross has been especially active in the arts scene and in historic preservation, while Ceoffe has been active in Lawrenceville, where his father once headed the community group Lawrenceville United. Both take a hard line on health-care giant UPMC, backing a lawsuit challenging its tax-exempt status. Both also support a ban on drilling for natural gas within city limits.

And with Lawrenceville on the come-up — and fears of becoming "the next South Side" on the rise — both espouse a grassroots approach to addressing community needs and concerns. Both say, for example, that like Dowd, they would support neighborhood groups trying to alter the expansion plans of the Thunderbird, Café, a Butler Street bar and music venue.

On the district's highest-profile development — the Buncher Company's controversial plan to develop 55 acres adjacent to the Strip District — Gross describes herself in "listening mode." Preservationists have expressed special concern about the fate of the Produce Terminal, a low-slung landmark that Buncher intends to partially demolish. Ceoffe says that while "I don't want to see the terminal come down," he's skeptical about what other uses might be found for it. "I'm sure Wholey's doesn't want to see another fish dealer there."

There are some policy differences. Ceoffe, for one, supports ending the state's Act 47 financial oversight of city finances. (That could give unions more maneuvering room in contract talks, though Ceoffe contends Act 47 allows local officials to avoid being held accountable for decisions.) Gross, by contrast, agrees with Peduto that while "we've come a long way" under Act 47, "I don't think we should be overconfident in our ability to balance the budget. ... I don't see a reason for rushing out of it."

But in this race, the major flashpoint has been the race itself, and who represents the real challenge to politics as usual.

Gross narrowly won the Democratic Party's endorsement this summer, arguably with the help of a handful of appointments to fill vacant committee spots — appointments suggested to County Democratic Chair Nancy Patton Mills, weeks before the endorsement, by a Peduto ally. Ceoffe filed suit to overturn the endorsement, but lost. Forced to run as an independent, he observes that "District 7 has lost an independent voice" — one he is best positioned to restore.

Gross has made numerous public appearances with Peduto and his ally, Allegheny County Executive Rich Fitzgerald. And Peduto confirms that when his campaign volunteers door-knock and phone-bank in the district, they tout Gross as well. "Democratic nominees support Democratic nominees," Peduto says, and Gross has been a longtime ally. "If I were to abandon her at the time she needs my help, then [Ceoffe] would be right, and I'd have sold out."

While neither Peduto nor Fitzgerald "needs someone on council who says they are gunning for them," Gross says, "I'm a grown-up with my own beliefs and my own supporters. No one has ever accused me of being a pushover."

"How can you expect someone to be independent when she's getting that kind of help?" Ceoffe counters. "If she wins, it's going to be a pure rubber stamp on council." Ceoffe, by contrast, promises to be a "check" on Peduto, and to promote "government transparency."

If it seems odd to hear the independent-minded Peduto praise party loyalty, skeptics may be surprised to hear Ceoffe complaining about it and calling for government transparency. Ceoffe was also a ward chair in the Allegheny County Democratic Committee until he stepped down to run as an independent this year; his day job, which he also gave up to campaign, was in placement services for the city Housing Authority.

"A lot of people may chuckle when I say I'm against the nepotistic form of government," he says. But, he says, "You can't say that just because you're a ward chair, you aren't qualified" for a government job.

Ceoffe's brother, Justin, was hired in early September as a fiscal auditor by City Controller Michael Lamb, who ran against Peduto earlier this year before calling off his own mayoral bid. "We went through the regular process; he was on the Civil Service Commission list" of eligible hires, says Lamb spokesman Doug Anderson, who denies political ties played any role. Ceoffe says his brother is "well educated and well qualified" for the post but adds, "My brother is not a candidate, and [his hiring] has nothing to do with the campaign."

Ceoffe calls it "unfortunate" that the party is "trying to take away people's choices." He adds, "There are committee members who were handing out Romney/Ryan stickers in 2012."

The Turpins ascribe their ouster to Peduto and Fitzgerald's efforts to remake the party in their own image. "Bill Peduto does not have the moral stature to be mayor," Mike Turpin says.

Peduto bristles at the notion that there is anything wrong with backing an ally. "If we don't build and organize, then we lose," he says. In any event, he says, the candidates' merits stand on their own. Voters in District 7, he says "have a candidate who has supported a progressive, versus a candidate who has stood against all that. Tony Ceoffe can't point to me and say, ‘It's all Bill Peduto's fault.'"