See the demolition and reconstruction of post-WWII Pittsburgh in Imagining the Modern: Architecture and Urbanism of the Pittsburgh Renaissance  | Features | Pittsburgh | Pittsburgh City Paper

See the demolition and reconstruction of post-WWII Pittsburgh in Imagining the Modern: Architecture and Urbanism of the Pittsburgh Renaissance 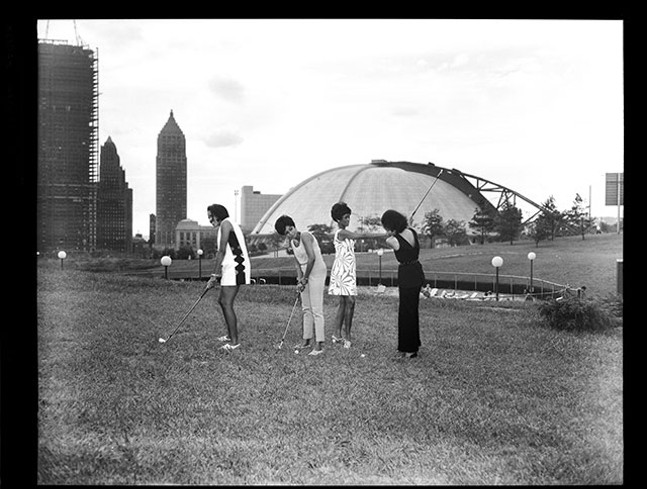 A few pages in from the cover of the new book, Imagining the Modern, there is a great close-up construction photo of the Civic Arena. You can see the ambitious steel superstructure rising from concrete footings, in enough detail to see dimpled expanses of rivets holding the plates together, but far enough away that the familiar Gulf and Koppers buildings loom inquisitively in the distance. Though the book contains various ruminations on the loss of the Lower Hill, this photo is not one of them.

Funny thing is, the Civic Arena image looks a lot like an adjacent picture of another ambitious public structure whose in-process steel frame is visible. Except that this is one of the old Exposition buildings, near the Point, by renowned architect Daniel Burnham. The visible portion of steel frame here is coming down, not going up, demolished for the coming of Point State Park.

The heartless excision of the old and the unduly optimistic construction of the new were part of the same campaign during Pittsburgh’s post-war Renaissance, the subject of the book Imagining the Modern: Architecture and Urbanism of the Pittsburgh Renaissance.

Imagining the Modern, the exhibit, was shown at the Heinz Architectural Center in 2015-16. As part of the examination of Pittsburgh’s great post-World War II destruction and rebuilding, the exhibit organizers analyzed and diagrammed the areas of the city — the Point, the Lower Hill, East Liberty, Oakland, and the North Side — that had been most drastically rebuilt, or at least had plans for such. The organizers retrieved a rich cache of period brochures and newspapers. They gathered enough quality architectural photographs for a stand-alone exhibition. They taught studios to architectural students in the exhibitions space and conducted several open discussions with invited guests, in which I was pleased to find a place.

I expected to feel that the next engagement with the Pittsburgh Renaissance would feel like a constantly looping gif of, say, the Immaculate Reception, one of those defining events through whose repetition we define our municipal identity.

But one of the many differences between sports and architecture is that while we use sports to reassert uncritical superiority, the meaning of architecture changes every time we look at it, if we are being thoughtful. And the authors of Imagining the Modern certainly are.

Their catalogue includes some dutifully scholarly essays and then diverges into some less-conventional reprints of oddly utopian period brochures and a flurry of contemporary newspaper articles, similar to the exhibit, though the newspapers are a tighter fit here. Interviews with relevant figures, while expected of the exhibit catalog genre, provide surprises here. Tasso Katselas, designer of iconic buildings, is lucid and opinionated into his 90s. We see some more obscure entries from his portfolio. The less well-known Troy West surprises with recollection and documents of grass-roots planning in the Hill and the corresponding progressive megastructure designs. These should inform the sadly conventional Penguins-led project that is going on now.

There is rigorous research and analysis here from an eminently qualified team. (I am pleased to be quoted as part of a salon discussion, but that doesn’t weigh notably in the book’s achievements.) Imagining the Modern is a must-have for Pittsburghers and Modernists in architecture, landscape, and planning more broadly. But that doesn’t mean the project is the last word. Rigorous and circumspect though they are, the authors are often cheerier about Pittsburgh’s Renaissance-era architectural legacy than I would ever be, even though they also directly acknowledge the hubris of the era.

I’d argue that for every artful Simonds and Simonds landscape, there is a crappy Gateway Center building adjacent. For every materially and structurally expressive U.S. Steel building and its soaring lobby, there is a horrible, rust encrusted street level plaza, and an even worse Crosstown Boulevard right behind. Renaissance-era Pittsburgh had many quality ingredients, but it could never quite get them all going at once.

Maybe the authors needed to like this work more than I do to make such an admirable catalog. With this renewed cycle though the topic, I am more convinced by their analysis and scholarship than by the frequently arrogant, invariably flawed, often dull architecture that they document.