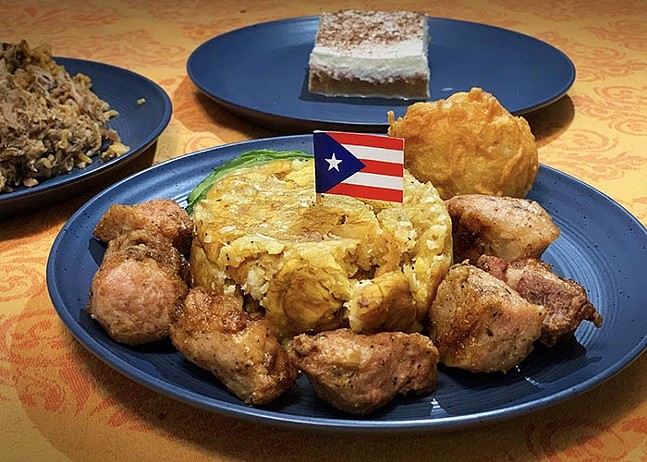 CP Photo: Kimberly Rooney
The mofongo with pork rinds at Secretos De Mis Abuelos
Pittsburgh’s first Puerto Rican food truck faced many hurdles that delayed its opening, but Felipe Crespo rose to those challenges and was ready when the opportunity to open a brick-and-mortar restaurant came along.

Secretos De Mis Abuelos opened its doors in late September for a soft opening week on Fifth Avenue in Uptown, across from PPG Paints Arena. The restaurant’s wide array of dishes balances the juxtapositions of natural sweetness and flavorful saltiness, crispy fried skin, and tender meat — as well as the full range of plantains — to create delicious meals for Pittsburgh’s Puerto Rican community and newcomers to the cuisine.

Before Secretos was a food truck, Crespo ran a catering business as a side gig while completing coursework towards a Master’s in biotechnology at Duquesne University. With support from his business partner Doug Raible, Crespo signed a lease for the food truck in March 2020. While the pandemic delayed the truck’s opening until April 2021, it gave him time to prepare a menu inspired by and in honor of his grandparents, both of whom always wanted to open a restaurant, and from whom Crespo learned to cook.

“I wanted to pass it down to whoever was next in line, whoever wants to take and just keep it, like in the family name, since we don't have anything for ourselves … but because of their sacrifice and support, I was able to dig out of that,” Crespo says. “And now, this is honoring them and repaying them, never forgetting where I came from.”

The journey to a brick-and-mortar restaurant happened organically. When the restaurant whose commissary kitchen Crespo was using for the food truck closed, Crespo was ready with a business proposal, and now he shares the storefront with Hapa Hawaiian Grill. The interior features a bright, colorful mural of island life, and when ordering, customers can choose to mix and match from both menus. Crespo recommends the teriyaki chicken or beef, as well as the coconut shrimp from Hapa.

The pernil, or pulled pork, is one of Secretos’ staples, and it’s a well-earned title. The meat is juicy, tender, and full of flavor that lingers after each bite.

Entrees come with two sides, and I chose to pair it with tostones, or fried green plantains, and yellow rice and peas. The rice and peas were mild and less salty, offering an excellent way to seep up some of the pulled pork juice. The tostones rounded out the entree with crunchiness and texture and just a slight kick from the black pepper sprinkled on top.

The mofongo with pork rinds was another excellent juxtaposition, this time between the mild, natural sweetness of the plantains, which were mashed into chunks and pressed into a half-dome shape — with a Puerto Rican flag sitting atop — and the intense saltiness of the pork rinds. The pork rinds themselves were ambrosian, with dry, crispy exteriors guarding pockets of fat that melted in my mouth, and meat that, while drier than the pernil, was still tender and delectable.

Crespo has expanded his menu now that he has a wider variety of equipment at the storefront, but frituras de Puerto Rico — a popular Puerto Rican street food — are still on the menu, and rellenos de papa with beef highlight the meaty flavor and complement it with a starchy mashed potato middle and crunchy fried-until-golden exterior.

There wasn’t much room left in my stomach for dessert, but the tres leches was too good to skip. With delicate, airy sponge cake that’s cuttable with a fork, and a moist, creamy frosting topped with a sprinkle of cinnamon that gives it a gentle warmth and spice, the tres leches was a wonderful end to the meal.

While the Secretos food truck is currently closed to allow Crespo to focus on the restaurant, the food Crespo is serving is a worthy homage to his grandparents and, hopefully, the start of Pittsburgh’s Puerto Rican food scene.Secretos De Mis Abuelos. 1334 Fifth Ave., Uptown. secretospgh.com or instagram.com/secretospgh