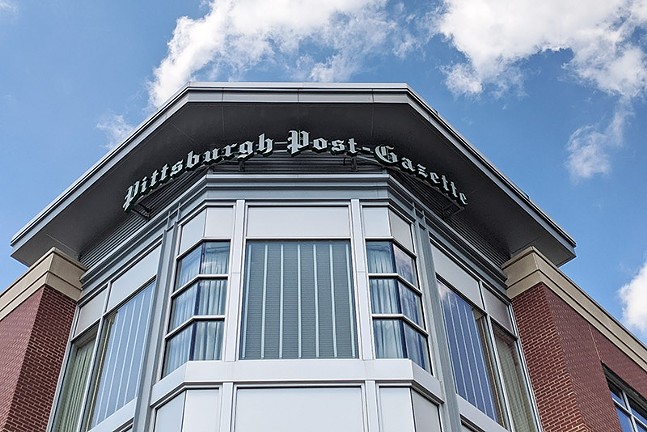 On Sat., Aug. 1, the union representing the mailroom staff at the paper voted unanimously to authorize a strike vote, according to Stephen A. Stasenko, Jr., a longtime P-G mailroom employee and president of the Pittsburgh Mailers Union Local 22/Communications Workers of America Local 14842. As Stasenko explains to Pittsburgh City Paper, this is the first step in a process that now goes to a vote by the executive committee of Communication Workers of America, the parent union of Local 22. If approved, CWA president Chris Shelton will then determine the start date of the strike.

The P-G mailroom employs 38 workers, all responsible for handling print materials as they come off the press. Of those, 26 are full-time workers and 12 are part-time employees. Stasenko said he didn't yet know when the strike vote would take place.

The move comes in line with the P-G's editorial employees, who voted to begin strike procedures one week ago, and are currently conducting a mail-in vote on whether to strike. P-G management declared an impasse on negotiations with its writing staff after trying to create a new contract without consent from the Newspaper Guild of Pittsburgh, the union that represents more than 120 journalists at the paper. The guild has said P-G management's declaration of an impasse is unlawful.

Stasenko says that, while the editorial and mailroom staff are facing the same situation, the P-G “has not declared an impasse or implemented their last offer on [mailroom workers] as of yet.”

One key conflict mailroom workers have with P-G's current offer is their refusal to increase pay rates, despite 30% of their wages now going towards covering health-care benefits. Stasenko says that mailroom workers have not been given a raise in 14 years and, for the last several years, have seen an 8% “wage diversion” to pay for health-care plans. Under the new contract, Stasenko claims that union members would also be paying for newly proposed high deductibles in the plan that are “much more inferior than our current health-care plan.”

This conflicts with the claims made in a byline-less story recently posted on the Post-Gazette website, which says the new contract includes a wage increase of 8% over three years and “a quality health-care plan.”

When reached for comment about the mailroom workers also deciding to conduct a strike vote, Post-Gazette Director of Marketing Operations Allison Latcheran says, "The Pittsburgh Post-Gazette plans to continue operations as usual regardless of what the unions do."

Stasenko adds that since their original Collective Bargaining Agreement expired on March 31, 2017, the P-G “has refused to pay the increases in our health-care costs, as required under the CBA, adding further financial burden on our members.”

Other concerns Stasenko lays out is the company's proposal to do away with pension contributions and personal days, both of which are also covered by wage diversions, as well as a major reduction in benefits for illness and accidents.

Another blow dealt by P-G's contract, he says, includes the company's right to layoff senior workers without providing severance pay or health-care benefits. He adds this is especially concerning given that mailroom workers are not salaried, but paid per shift.

“They want to be able to layoff for any reason,” says Stasenko. He believes this would allow the company to layoff all full-time mailroom employees “except five or six people they probably like” and make everyone else part-time, which would eliminate their benefits.

Mike Fuoco, president of the Newspaper Guild of Pittsburgh and a P-G reporter, says he doesn't feel all that comfortable commenting on another union. However, he says the Pittsburgh Mailers Union Local 22 decision shows that Post-Gazette ownership and "its union-busting attorney from Tennessee has not discriminated in bargaining in bad faith with all unions at the newspaper which is why multiple Unfair Labor Practice charges in that regard have been filed with the [National Labor Relations Board]." P-G management has retained Nashville-based King & Ballow law firm since 2017. The firm has a history of anti-union litigation.

Stasenko says that he and the other P-G union heads, which include the Guild and representatives for the newspaper's sales staff, truck drives, press operators, and others, have kept in touch through online Zoom meetings.

“Basically, we all have the same proposals,” says Stasenko. “We're all basically in the same boat. We talk regularly, we're united. We have definitely been in communication with one another.”

Ultimately, Stasenko says he would like to see P-G management attorneys left out of negotiations so the mailers union can sit down with management and work out a better deal. He adds that the union has “bargained in good faith in the past” and produced three concessionary contracts in 2007, 2010, and 2014, in effect agreeing to economic conditions that would allow the paper to continue operations.

“We're prepared to fully negotiate a reasonable settlement,” says Stasenko. “We understand that the newspaper industry is under pressure economically, and we are prepared to do what we need to do to preserve our jobs.”