or, the Whale and Evangeline cast anchor Downtown

Chef Dennis Marron’s new restaurant or, the Whale has raised its flag in the harbor of Downtown’s former Salvation Army building. Built in 1920, it served as the group’s Western Pennsylvania headquarters until 2008. Now it’s the Distrikt Hotel, and inside awaits seaside dining. The restaurant bar embraces the maritime theme with ships’ lines looping from the ceiling and a sort of captain’s-chair view of the dining room and open kitchen below. The restaurant is focused on operating sustainably, and the bartop is no exception. “It’s made from old construction waste — busted-up pieces of concrete and copper fleck,” says Marron. Hidden TVs are tucked behind it for major sporting events and the morning news. A drink rail lines the back wall for those who enjoy a casual lean.

Peek over the railing to glimpse the glassed-in wine cellar that doubles as a private dining room for small parties, where you can snag the attentions of one of the two sommeliers, Eric Moorer and Kelly Peterson Bates. (Bates also manages.) The two have compiled a unique but approachable list that focuses on complementing Marron’s food. “I thought it was really important that everything would pair, and make wine an important part of the meal,” says Moorer. “There’s a small part of me that just wants to do weird things all the time with wine. You’ll see a lot of really strange indigenous varietals,” he says, chuckling. Patrons can expect domestic rieslings that pair nicely with many of the fish dishes. 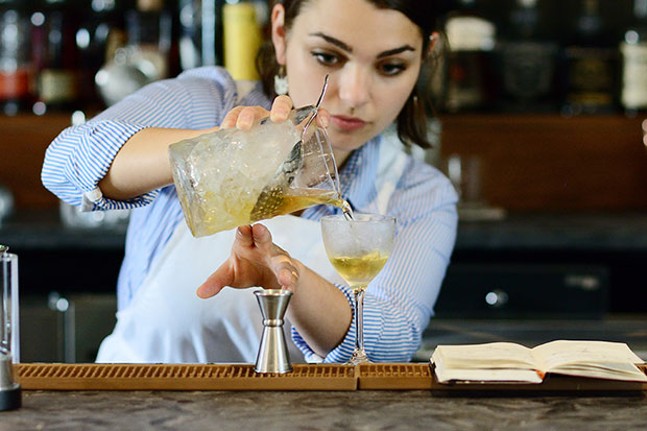 On the mezzanine, you’ll find Evangeline, a spacious, airy bar, and its accompanying oyster and conservas bar. Evangeline is named for the Salvation Army’s professional-women’s residence. The architectural details have been restored and enhanced, from the original stage backed with a living wall at the base of the stairs to the beautiful flowers in the plaster of the arcing ceiling supports (complete with tiny pineapples, a traditional symbol of hospitality). Semicircles of couches and chairs with low-slung tables provide intimate spaces, while seats at the bar offer a chance to rub shoulders with bar patrons and watch the bartenders at work.

A gentle nod to continental dining permeates the bar service, with à la minute juicing and a full absinthe fountain service. Perhaps the drink with the most flair is the Smoke Show, the house cocktail styled on a Manhattan. Available at both bars, it’s smoked tableside under a large glass bell to infuse it with cherry-wood flavor.

The oyster bar and seafood guide the beverage program for Michael Anderson, lead bartender for both Evangeline and or, the Whale. “It gives us a chance to explore some Mediterranean, mainly Portuguese and Spanish cocktail ideas,” he says. Take a quick look at the cocktail list at either bar, and it’s easy to see the trinity that informs them: sparkling wine, absinthe and sherry. Evangeline also hosts a large collection of gins and scotch, mostly Japanese and single malt that focus on salinity.