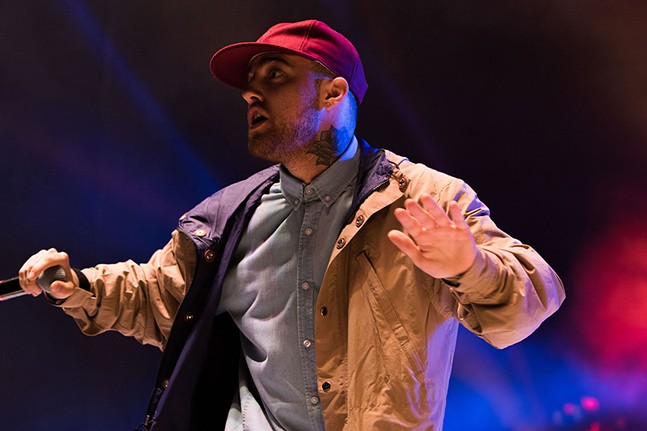 CP photo: Luke Thor Travis
Mac Miller performing at Stage AE in 2016.
The untimely death of rapper Mac Miller in 2018 left Pittsburgh mourning a local talent who made it big while still using his music to spotlight his hometown. Now a screenplay for an unofficial biopic about his short, but influential life has made it into the Black List, an annual compilation of undeveloped scripts voted in by various studio and production company executives.

As reported by Deadline, the synopsis for the screenplay, tentatively titled Blue Slide Park after Miller’s 2011 album, which itself was named after a playground in Pittsburgh’s Frick Park, reads: After his first album topped the Billboard Charts, life was never the same for Malcolm McCormick aka Mac Miller. This is his story of music, love, success, family, and addiction.

The description then says the story was adapted by Kyle Anderson and Michael Vlamis from a “forthcoming manuscript” by Paul Cantor, a journalist who was writing a biography about the musician before Miller’s death of an accidental overdose of the opioid fentanyl.

Its inclusion in the Black List bodes well for the Blue Slide Park biopic, as the list has become a source for stories that were then developed and released, many to great acclaim. Since it was created in 2005, over 1,000 Black List scripts have been produced, among them award-winners like Spotlight and The Revenant, and the recently released dramatic thriller Queen and Slim by Lena Waithe.

Despite the news, fans shouldn’t expect it to hits theaters any time soon, as Miller’s family appears hesitant to allow such a project. This was confirmed in June 2019 when director CJ Wallis posted in a Twitter thread that Miller’s family requested he and his company, FortyFPS Productions, hold off on developing a planned documentary about Miller.

Wallis went on to say that he and his company respectfully complied, but argued that their intentions were good, as the documentary was meant to be “a motivational & positive picture” of the young rapper as depicted through stories told by his peers.