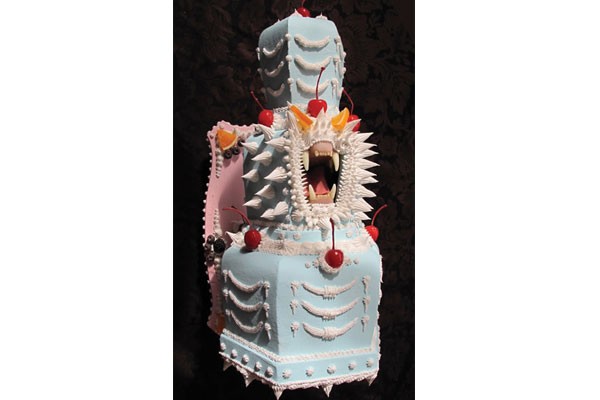 A sidelong glance at the work of San Francisco-based artist Scott Hove might make your mouth water. Swirls and roses of pastel buttercream top what appear to be creations better suited to a bakery than a gallery. But Hove doesn't construct in devil's food and icing; this is acrylic paint and polyurethane foam. And a closer look reveals that what he's cooked up isn't so sweet.

Visitors to Hove's own gallery, Cakeland, perambulate though a space in which every inch has been re-imagined as an oversized confection. In Sweet Mortality, Hove's solo exhibition at Gallery 4, the desserts appear in their standard dimensions. But while the measurements of the works are more typical, the scope is magnificent.

Hove takes the hallmarks of candied temptation and adds unexpected ingredients. The simplest in design is also is the most obvious in implication. "Hubris Party" is a sheet cake, frosted brown with "Congratulations Bashar Al-Assad" streaming across in cursive. As the sham delicacies grow more ornate, Hove's intentions become more complex, his execution more nuanced. "Dark Passenger," "RX" and "Glamicide" morph the mold from an easy rectangle to the shape of an assault weapon, blinged with gold or inset with jewels.

"Ice Cake" glistens with crystalline blue, the facade of a winter palace dripping with icicles. Stairs lead into a mirrored chamber promising never-ending depth within a shallow recess. There's no apparent menace, but as in a dream fully unsettling though absent a definable threat, a sense of doom pervades. "Scream Cake" and "Baby Cake" stack layer upon layer with the illusion of goodness, offset by a wide-open animal mouth, fangs ready to clamp down. In "Self Slice," the possessor of the chops shifts from predator to prey, knives stabbed into its sides, recalling the ritual dispatch of a sacrificial animal, jaws hinged open to scream as the first blade goes in.

In "Snap," the confection itself has become unhinged. Cleft down the middle, it crawls with black ants that track through the frosting and pad in and out of its maw. It's unclear whether the insects are intruders venturing into the chocolate abyss, or offspring erupting out of it to raise hell in the world.

Hove has crafted pieces viewers can easily sink their teeth into. But these treats bite us back.