Porter, and about a dozen other protesters, stood outside of the William S. Moorehead Federal Building July 6 holding a large banner that simply said "Impeach." Richard Voelker, the self-proclaimed "anti-Bush button man from the North Side," held the other end of the banner while passing out bumper stickers and buttons to passersby. Voelker was adorned with buttons including those which read: "The only Bush I trust is my own" and "A village in Texas is missing its idiot."

"The average American citizen has his head up his ass," Voelker said. "Everyone should be on the streets protesting this criminal. I want [Bush] out of the White House so bad I can taste it."

Porter and Voelker are part of the Pittsburgh chapter of Code Pink, a nationwide women-led activist organization that strives for peace and social justice. Holding signs that read "Even Nixon knew when to leave" and "I Miss America," the group protested during the noon lunch hour under sunny skies. They sang songs to the tune of "God Bless America," with the lyrics altered to "I Miss America."

The group took to the street over President Bush's commutation of Libby's 30-month prison term. On March 6, a federal court convicted Libby on two counts of perjury, one count of obstruction of justice and one count of making false statements to federal officials during a grand-jury investigation the leak of CIA operative Valerie Plame's identity to reporters.

Bush commuted Libby's prison sentence, calling it too harsh. He did, however, leave intact the $250,000 fine and over 400 hours of community service.

"President Bush defies logic and decency," said one protester, Mount Lebanon lawyer Bob Abraham. "He signed scores of death warrants when he was governor of Texas, yet somehow 30 months for Scooter Libby is too harsh?"

Passing motorists honked at the small crowd at the intersection of Grant Street and Liberty Avenue. Two men in a Pittsburgh Public Works vehicle and a driver of a Port Authority bus were among those honking their support.

Code Pink originally set up directly in front of the entrance to the Federal Building, however, security guards moved them further down the sidewalk to the corner of Grant and Liberty.

Michael Finan stood in front of the Federal Building smoking a cigarette and watching the protest. Finan, from DuBois, said he leans toward the Republican Party and often supports Bush, but this situation is different from most.

"[Libby's] ass should be in jail," Finan, 26, said. "I believe in second chances if you get caught stealing a pack of cigarettes. But this guy blatantly put someone's life at risk. That's a completely different ballgame."

Most people passing by showed support for the group. Avowed supporters of the president were hard to come by, and didn't want their names published.

One federal employee refused to give his name as he spent the end of his lunch break sitting in the shade and watching the protest.

"There's better shit to protest, believe me," he said. "There's people dying by guns on American streets every day of the year, but no one's protesting that."

Others, like 26-year-old West Virginia native Tim Jonczak, were skeptical that such protests do any good at all.

"It doesn't do anything when these people leave here at the end of the day," he said. "I don't really care about Scooter Libby, and a lot of people don't. But politics, it's corrupt. If you aren't corrupt going in, you will be coming out." 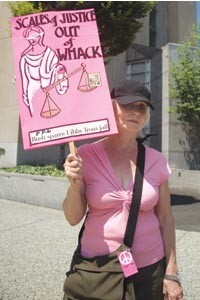