Science says Bloody Marys taste better on planes, so we tested it

It seemed like a waste of money to buy a plane ticket just to drink a Bloody Mary in the sky. So instead I drank a Bloody Mary while listening to airplane sounds on YouTube. 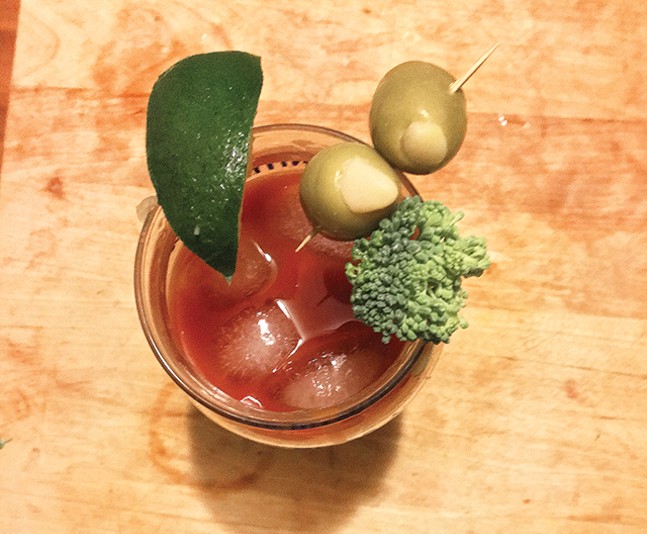 In 2015, two researchers from Cornell University conducted a study to see how high noise levels, like those on an airplane, would affect subjects' taste buds. They found it suppresses sweeter tastes and enhances savory and umami flavor, like tomato juice. The release of the study prompted many clickbait articles boasting that Science Proved Why Bloody Marys Taste Better on Planes.

Pittsburgh's Sunday Best Bloody Mary festival is on Jan. 27., so I’ve had the cocktail on my mind. I was curious about the study, but it seemed like a waste of money to buy a plane ticket just to drink in the sky. So I did the next best thing: drinking a Bloody Mary while listening to a very loud YouTube video called "ASMR 8-HOUR AIRPLANE FLIGHT."

The first step was making the thing. I bought tomato juice and vodka, but improvised the rest based on what was on hand:

Vodka
Tomato juice
Hot sauce
Black pepper
Salt
Lime
Olive juice/garnish (from jar of garlic-stuffed olives)
A long piece of broccoli (I didn't want to buy any celery because every time I do, I waste 80 percent of it.)

I wanted to see what the drink tasted like in complete silence. I unplugged my space heaters. It was cold, but I really wanted to drink my Bloody Mary in silence.

Of course, it tasted good. It would taste good in a ditch. I love each of the Bloody Mary ingredients individually, so naturally, I love them as a soup/drink. The tomato juice is a little ketchup-like, but maybe that was my fault for buying Big Win brand tomato juice that says "get juicy!!!" on the label.

I rated this Bloody Mary in complete silence a 7.5/10.

The next day, I made it again. Disappointingly, all the airplane noise videos on YouTube are white noise ASMR designed to help people fall asleep. My chosen video came complete with take-off noise, seatbelt sign dinging, and the hushed murmuring. I really wanted loud, terrible airplane sounds.

I listened to the airplane sounds for six minutes until I felt immersed enough to almost taste the dry, stale air. I took a sip. It was still a Bloody Mary. Still delicious. But was it more delicious?

I asked my boyfriend, who hates tomatoes but loves ketchup, to try it. Unsurprisingly, he did not like the taste of the cocktail, either while "ASMR 8-HOUR AIRPLANE FLIGHT" is blasted in his ears, or in complete silence.

"Is the idea that the drink is so bad that if your other senses are dulled, it’ll taste better?” he asked.

I tried the headphones again, fruitlessly trying to recreate a Cornell University study in my apartment. As I listened, a fake sunset appeared out of the fake plane window in the video. Unfortunately, it was a little beautiful.

I chomped on the broccoli. If nothing else, this experiment proved there are many vegetables besides celery that work well in a Bloody Mary.