School Girls; Or, The African Mean Girls Play touches on colorism within the Black community 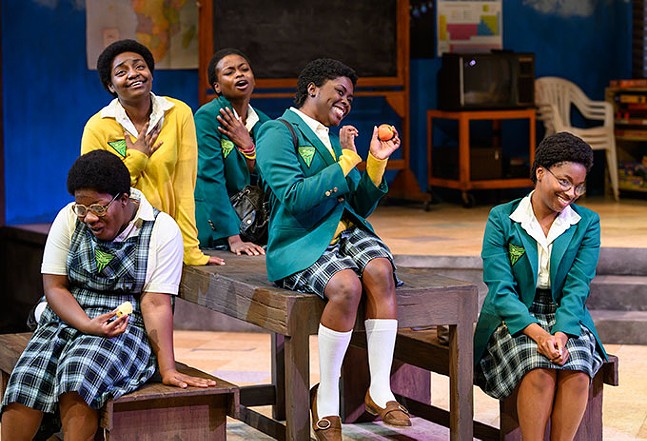 "Colorism," a word first coined in 1982 by acclaimed African-American novelist Alice Walker (The Color Purple), is different than racism and defined as a “prejudicial or preferential treatment of same-race people based solely on their color.” The concept might not be discussed as openly as racism, but it's a significant and insidious issue, particularly among Black men and women dealing with the effects of European beauty standards. These issues of prejudice and identity are on full display in School Girls; Or, The African Mean Girls Play running now through Dec. 8 at Pittsburgh Public Theater.

School Girls, written by Jocelyn Bioh and directed by Shariffa Ali, is set in 1986 when Ericka (Aidaa Peerzada), a half-white, half-African girl, arrives at The Aburi Girls’ Boarding School in Central Ghana shortly before auditions for the Miss Ghana competition begin. The girl who is crowned Miss Ghana gets to fly to Florida and compete in the annual international Miss Universe beauty pageant.

Paulina (Markia Nicole Smith), queen bee of the boarding school, is already certain she will win the Miss Ghana title, as her competition consists of her minions, meek Ama (Ezioma Asonye), studious Mercy (Candace Boahene), plump Nana (Atiauna Grant), and silly Gifty (Shakara Wright). But Paulina’s confidence vanishes once she sees Ericka, whose light skin and eyes and long curly hair are an immediate threat to Paulina’s short, kinky fro and dark complexion. (At one point, Paulina uses bleaching cream in attempts to reduce her melanin concentration, a dangerous practice popular in Africa that results in serious side effects, such as mercury poisoning and skin ulcers.)

Before heading to the show, I looked at the trailer online and noticed that the only light-skinned actress was Peerzada. “Do you think they did that on purpose?” asked my editor. At the time I said no. But after watching the play, I realized the casting choice was very intentional.

Unlike the 2004 Mean Girls, which involves slow-burning sabotage and revenge, the conflict in School Girls bubbles over at the show's onset. As soon as Ericka shows up to the school the group breaks off into two: Paulina versus the rest. All Paulina sees is Ericka’s outward appearance, which makes her jealous, resulting in her ostracizing Ericka and the other girls rebelling against Paulina for her mean-girl attitude.

Without giving too much away, I left School Girls feeling unsettled. I realized that not much has changed in beauty ideals, most notably the colorism within the Black community, since the 1980s when the play took place. It recalled memories of my younger sister, who had darker skin, idealizing me and my lighter complexion, and the pain and low self-confidence she dealt with at our mostly white high school. I cried on the way home and am starting to cry as I write this.