"It's a double-edged sword: less routes and more money." 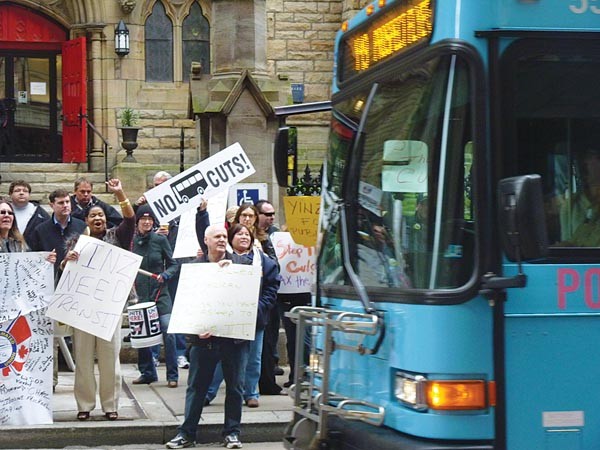 For Beechview resident Susan Kelley's teen-agers, Port Authority buses aren't just how they get to Creative and Performing Arts High School in Downtown for an education. Using public transit is an education.

"I don't worry that they won't be able to figure out how to get around a major city when they are grownups, because they've done it now," she says.

However, it's a part of city living that could be jeopardized under the Port Authority's pending plan, which includes a 35 percent service reduction and fare increases.

"It's something that people don't even think about when they think about what the cuts mean," says Pittsburgh City Councilor Bill Peduto. "In the suburbs, you get on a big yellow bus. In the city, you rely upon the Port Authority."

Through the Pittsburgh Public School District, Kelley's children — along with nearly 4,000 other district students — receive monthly Port Authority bus passes for transportation, since they live more than two miles from their high school.

But as the school district contends with its own anticipated operating deficit of $21.7 million, and the Port Authority's plan to eliminate service to nearly 90 communities, school officials are changing how it transports some students who use public transit.

"We're in a rough situation," says Ted Vasser, the district's director of pupil transportation. While officials try to trim the district's budget, the pending cuts create a financial burden; monthly Zone 1 passes will increase by $7.50; and Zone 2 by $16.25.

The increase in fares and a decrease in service make it harder for the district to justify the expense of purchasing passes. The district currently distributes 3,887 bus passes to students, and plans to reduce that by 1,300 to save an estimated $1.2 million in the fall. Under the district's plan, the students who will no longer use the Port Authority will be picked up by private carriers on yellow school buses, and school start and end times have been adjusted. The district does have a preliminary plan to determine which students will get passes, but has not yet released it.

So while Kelley's children will still get to school even without them, the PAT passes mean more to them than just getting to the classroom. They use the passes for rehearsals, auditions, jobs, social events and independence.

"Going to CAPA means having classmates from all over the city — a plus. It also means not having friends specifically in the neighborhood — a minus," Kelley says. "Without PAT routes, my kids would have a very limited social life outside of their school day. It just isn't feasible."

As for how the cuts will affect those students who will still have passes, Vasser says, "We have to really wait and see where the cuts are going to take place. Then we may have to make other decisions. ... We'll look at each situation."

The Port Authority, meanwhile, says it hasn't seen any formal plan from the district yet and couldn't say yet how it would be affected. "Generally speaking, if they're going to use less service, there is going to be some kind of financial impact, we just don't know what it is yet," says spokesman Jim Ritchie.

The transit agency currently sells passes to several schools and districts across Allegheny County who use the bus system as part of their student transportation.

At Community in Schools Pittsburgh-Allegheny County (CISPAC), a drop-out prevention program which works with at-risk students, the incentive of daily bus passes for students to get to class will be in jeopardy. CISPAC's academies in the East End, Springdale and Homestead are in communities that will see a severe reduction in bus service, or even the elimination of service altogether.

Nicole Molinaro Karaczun, CISPAC's executive director, estimates that 20 percent of those students — drop-outs working toward their diplomas — will be left without transportation. But even those who will still have bus routes servicing the academies could face longer commutes, which worries Karaczun about the effect on their studies.

"We can give out bus passes until we're blue in the face," she says. "But if it's going to take kids four to six hours to get to [and from] school, who can blame them for not coming?"