ScareHouse and Bricolage team up on a new escape room

“You are entering the mind of the master.” 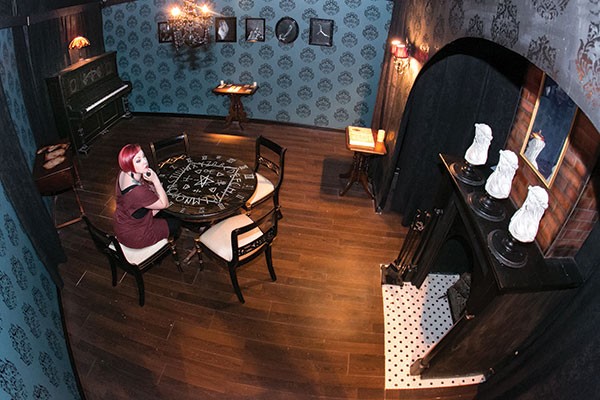 CP photo by John Colombo
Macabre Noir, who art-directed the Imaginarium's Chamber of Illusions, sits in one of its mystery rooms.

Rod Schwartz has a thing for immersive theatrical experiences.

For 13 years, he and his wife, Donna, have hosted a big annual Halloween mystery party where the guests stay in costume, and in assigned character, while competing to solve riddles and puzzles. In 2012, the Morningside resident was “blown away” by Bricolage Productions’ STRATA, an immersive and interactive theater piece that occupied a whole building Downtown. (He attended STRATA multiple times and now serves on Bricolage’s board.) Schwartz is also a longtime fan of ScareHouse, the Etna-based haunted house known internationally for its realistic sets and special effects. And when the escape-room boom hit, few were happier than Schwartz, who has tried all of the real-time puzzle-solving challenges he can manage, in Pittsburgh and elsewhere.

Now Schwartz is taking his enthusiasm to the next level: His company Black Brick is launching what might be Pittsburgh’s most ambitious escape-room complex yet, and he’s doing it in partnership with Bricolage and in consultation with ScareHouse. Enter the Imaginarium opens Wed., Sept. 14, in a cavernous former nightclub in Harmarville. It’s an attraction Schwartz plans both to expand and to run indefinitely — for as long as visitors resonate with what its creators promise is a uniquely theatrical, even emotionally moving, take on the escape-room phenomenon.

Escape rooms offer teams of visitors a dramatic scenario — bank heist, entrapment in ancient tomb — and a time limit to gather clues leading to freedom, lest everyone be “trapped.” The games started in Japan, in 2007; there are now hundreds of escape-room companies in the U.S. Pittsburgh alone hosts several.

Schwartz — who in August visited New York City to do eight escape rooms in four days — speaks positively of all his escape-room experiences. But he thinks the genre can grow artistically. For instance, instead of a single scenario, why not a series of interrelated experiences, all under one roof? The idea of an “imaginarium,” with visitors working their way through a fictional character’s mind and memories, was appealing, especially if the character is a magician, artificer and shape-shifter with affinities to Daedalus, the maze-maker of Greek legend. “You never know what experience of his you’re going to go through next,” says Schwartz, who by day runs ticket broker All American Events. “You can dig into this.”

Schwartz developed Imaginarium with Bricolage artistic director Jeffrey Carpenter. Since STRATA, Bricolage has produced or co-produced immersive works including 2014’s OJO (which imagined a “travel agency” that blindfolds its customers) and Saints’ Tour, a magical-realist trip through Braddock. Imaginarium will have games to play and puzzles to solve, but also a deeper current. “The challenge in creating this kind of work is to really integrate the narrative with the participant and their experience so they can really transpose and project onto it their own memories and experiences,” says Carpenter.

Schwartz later approached ScareHouse, which he admires for its artful approach to horror. ScareHouse creative director Scott Simmons, in turn, says he’s been inspired by Sleep No More, the pioneering immersive adaptation of Macbeth, originated by British troupe Punchdrunk, that let audiences wander through an elaborate building-sized set. Simmons had also consulted with Bricolage in developing its own immersive attraction, The Basement (where the ghouls can touch and restrain you). Other key personnel include scenic designer Tony Ferrieri and ScareHouse art director Macabre Noir.

Guests of Enter the Imaginarium will approach a windowless, one-story cinderblock rectangle situated behind a Dunkin Donuts on a commercial stretch of Freeport Road. Inside, teams of four to 10 visitors will enter various environments, including a gas-lit alley, that lead into the series of distinct chambers, each with its clues to find and escape-puzzles to solve. The atmosphere is broadly Victorian. Visitors won’t see the main character (other than being inside his mind), but will be intermittently guided by costumed “acolytes.” Otherwise, they’re on their own for the 80-minute experience (only 60 minutes of which is timed).

“You are entering the mind of the master,” says Carpenter. “You are encountering a mystery that will be revealed to you that you are then solving to get out.”

The rented building’s 9,000 square feet allows room to grow. And indeed, Imaginarium’s first “track,” Chamber of Illusions, will be joined on Oct. 12 by The Inventor’s Paradox, with a third track planned for spring, and a fourth later. Each track can stand alone, but is bound by a master narrative.

As escape rooms proliferate, it’s worth noting that gamers will try each one only once. The Imaginarium’s creators say the more the merrier.

“The escape rooms that are going to be popular are going to be the ones that offer more than a room with a bunch of puzzles,” says Simmons. “People need to be transported.”