Scared of Sarah at Off the Wall

It’s the performances that’ll knock your socks off. 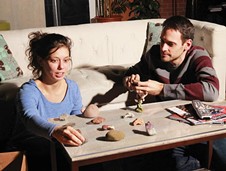 Photo by Heather Mull
Sarah Silk and Shaun Cameron Hall in Scared of Sarah, at Off the Wall

It’s all about the performances. Off the Wall Productions presents the regional premiere of Laura Brienza’s Scared of Sarah, and while there’s certainly a lot going on with the play, the takeaway is the work of this outrageously good cast.

Erika Cuenca, Sarah Silk and Shaun Cameron Hall are the three actors trapped inside the play’s emotional hothouse. With the impeccable direction of Ingrid Sonnichsen, they manage to navigate their own way, and help plot a course for us, through all that Brienza has thrown down.

Cuenca and Hall play Lily and Sam, a young, smart, trendy Manhattanite couple who could have stepped out of the pages of a Sharper Image catalogue. But their idyllic life is about to undergo profound stress as Brienza unleashes a series of near-biblical trials upon them.

The biggest stressor is Lily’s sister Sarah (played by Silk), whose Fragile X Syndrome diagnosis places her on the autism spectrum. Sarah has zero social skills and cannot tolerate any sort of physical contact. For most of her life she’s been taken care of by her father. (The mother left when she and Lily were children.) But Dad has recently died and Lily is, against her wishes, pressed into service. As the play opens, Lily’s learned that she’s pregnant, which is the first of many complications Brienza racks up.

She’s a terrific writer and she’s got a genius play on her horizon, but Scared of Sarah isn’t quite it. There’s so much that’s good, but Brienza doesn’t know when to quit. Each scene brings a new calamity, some horrible occurrence, until Lily’s life resembles the Book of Job. Predictably, Scared of Sarah turns into a soap opera; terrible things happen and then everybody has to discuss how they feel about it. It might be a high-minded soap opera, but it’s still soapy.

But as mentioned above, it’s the performances that’ll knock your socks off.  What’s most admirable is the way the cast (thanks to Sonnichsen’s direction) expertly walks the fine line between high-stakes drama and over-the-top histrionics. Cuenca, Silk and Hall play with ruthless honesty, and it yields devastating results.