A handful of baritone saxophonists have liberated the large instrument from its heavy look and low register. Others have been perfectly content to use it to blow some fat, low-end blues riffs. Hamiet Bluiett might be the only baritone practitioner who can do both in just a few breaths. Best known as a founding member of the World Saxophone Quartet, he can lay down a groove, like his “Hattie Wall” (the quartet’s unofficial theme song), or join his compatriots in group solos or melodies that push his instrument beyond its typical range. Next week, he returns to Pittsburgh with the Ethnic Heritage Ensemble, the trio led by percussionist Kahil El’Zabar.

Bluiett fell in love with the instrument when he was 10 years old, growing up in Brooklyn, Ill., just outside St. Louis. Originally a clarinetist, he eventually made the baritone sax his main instrument. He moved to New York in the 1970s, where he impressed legendary bassist Charles Mingus with his skills. “I developed a four-octave range with no problem. High reed notes, all that kind of stuff. I was screaming,” he says. “When I was playing with Charles Mingus, I was reading the parts an octave up. Mingus said, ‘How do you do that?’ I said, ‘I worked on it! It’s very difficult and very hard.’” 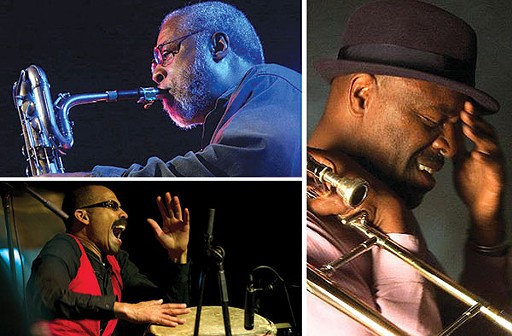 After two years with Mingus, he eventually teamed up with some musicians he had known from St. Louis’ Black Artists Group (BAG). They formed the World Saxophone Quartet, which has played everything from Duke Ellington to Marvin Gaye to heady originals. Despite a few minor lineup changes, they continue to resurface every few years, even as each member maintains solo career.

Bluiett crossed paths with drummer Kahil El’Zabar while playing in Chicago in the ’70s. The two would start working together more regularly in the following decade, usually in a stripped-down lineup that included one other horn or a pianist. (Trombonist Craig Harris will perform with them in Pittsburgh.)

What might seem like a minimal instrumentation has become the norm for Bluiett. “I’m used to the World Saxophone Quartet, and it was more challenging than this because we didn’t have no drums, no piano, no bass and no sound system,” he says, adding, “I learned from people who were playing hardcore blues. I’ve played with an organist and no microphone. That’s how I developed that range on that instrument, to play above — notes that you can hear.”

At 75, it’s admirable that a veteran musician like Bluiett still travels the country, playing one-nighters. What’s more impressive is that the saxophonist suffered a stroke five years ago, from which he says he’s rebounded fully. It makes him, he says, “the poster child for recovery.”

Perhaps that’s why he describes his current work as a “healing journey. I think it’s time for that to happen, with so many horrible things going on that we have to face every day. We need to get back in touch with what we’re really about,” he says. “At least that is where my head is at.”