“But even if you play a certain sound, a certain pitch, that pitch can heal.”

In 1969, the saxophonist Albert Ayler released an album titled Music Is the Healing Force of the Universe. Coming at the end of a decade filled with social upheaval and quests for higher consciousness, the title might now be regarded as a slogan. But to tenor saxophonist Billy Harper, this credo represents his life’s work.

Have you ever felt really touched by a melody or harmony? It’s not a fluke. Harper, whose music comes as the logical progression of hard bop, posits that the way certain tones are combined in a piece has a profound effect on listeners. “Music and sound itself have such a healing quality. You can depend on the particular vibrations that are being played on a particular tone. And everybody hears their own kind of musical pitch anyway, without knowing it,” he explains. “But even if you play a certain sound, a certain pitch, that pitch can heal. In ancient times, music was always used for healing, and certainly there are so many jazz tunes that express that kind of healing power.

“Some people take it for granted, because it would seem like magic to them, but sound does have these qualities. It’s like colors having effect in art. It’s the same thing.”

Born in Houston, Texas, Harper eventually moved to New York in the 1960s, where he had the opportunity to play with some of the era’s most reputable bandleaders. Drummers Art Blakey and Max Roach both hired him for their bands around that time. On Lift Every Voice and Sing, Roach combined a vocal group with his quintet for intense readings of traditional gospel works like “Troubled Waters” and “Motherless Child.” The latter featured Harper combining his rich tone with an intensity that recalled John Coltrane. 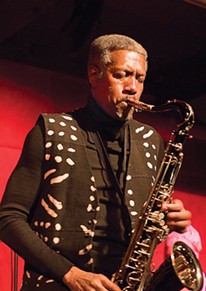 Trumpeter Lee Morgan, who had also played with Blakey’s Jazz Messengers, recruited Harper for his own band. After having a huge hit with the groovy “The Sidewinder” — which planted the seeds for a funkier, more accessible version of hard bop — Morgan was progressing again, in no small part due to the compositions Harper brought to the band. “He came on the scene at 16, playing with Dizzy [Gillespie]’s big band. He had a reason to be kind of cocky. But he was a good guy inside,” Harper says of Morgan. “At the time I was playing with him, he was interested in politics and straightening himself up. We were going in a new direction, and he was playing good. His chops were back up.”

Although Harper has a sizable discography as a sideman or co-leader, which continues today with the all-star cooperative the Cookers, he has recorded extensively under his own name. Capra Black, titled for a song he had played with Morgan and continues to play with the Cookers, has been heralded as one of the cornerstones of jazz’s Black Consciousness movement. The saxophonist helped to launch the Italian jazz label Black Saint in 1975 with an album of the same name. He did the same for Black Saint’s sister label Soul Note a few years later. Pianist Francesca Tanksley, who appears with Harper this week, has been working with him since the 1980s.

A strong recent release came with The Roots of the Blues, an album he recorded with a longtime friend, pianist Randy Weston, who is also versed in the history and healing power of music. Weston came up with the concept, which features original, blues-derived originals along with a few standards that distill the music to its basic elements. Harper liked the adventure of playing in a duo. “It leaves even more freedom because you don’t have to be relying on a particular rhythm,” he says. “There’s no constriction in relation to rhythm or time or all the things that are added by other players. You may be directed to jump from 4/4 to a waltz, and it’s much more free.”

Along with performing, Harper has spent many years teaching music. He currently instructs an improvisation class at the New School, in New York. He says improvisation isn’t something that can be taught in the traditional sense, but he’s not forcing students to memorize John Coltrane solos either.  Students “have to learn a lot of music theory,” he explains. “That is actually the secret, to have a structure, so that you can go forward and solo and feel free on top of the structure.

“I remember a time that I went to Russia with the Thad Jones/Mel Lewis Big Band in 1972. We got with some musicians there and [pianist] Roland Hanna was playing something, just soloing at a party. And it was amazing: He had no music, but he was improvising, which is what we do all the time. Where did it come from? It comes from that structure I was talking about —the music-theory structure that he already knows. It’s inside.”

Harper studied music himself, but channeling the healing power of the music is easier said than done. “I sit there at the piano until something comes,” he says. “Then maybe a melody comes and it’s pretty good, but it might not be strong enough. So I just write it down and put it on the side till something comes that’s really strong and I know it’s great. And that’s the way I go about approaching it.”